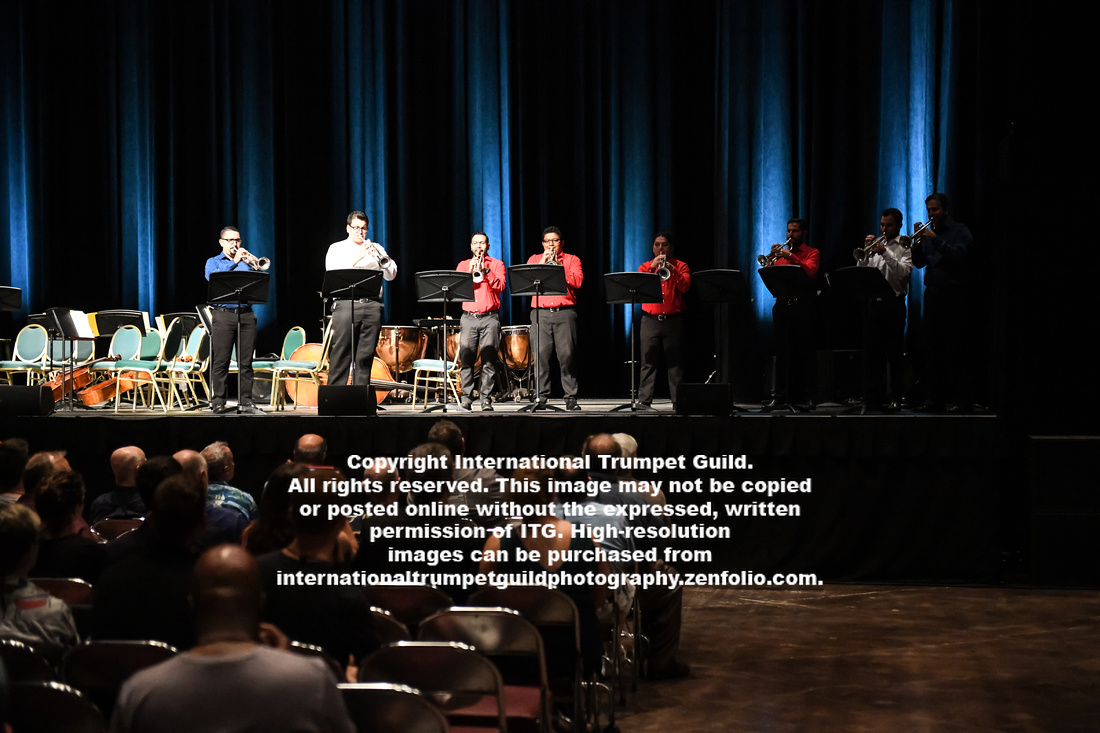 The College of Central Florida’s CF Trumpet Ensemble gave a superb rendition of Kevin McKee’s Dürrenhorn Passage. Their performance grabbed the audience’s attention immediately with a powerful and striking sound that was accented by tremendous precision from each performer. Their ability to change colors throughout each section of the work was fantastic and provided a unique musical journey for the listener. Their electrifying interpretation of their challenging piece gave a wonderful transition into the session’s presentation and left the audience on the edge of their seats. (JPS) 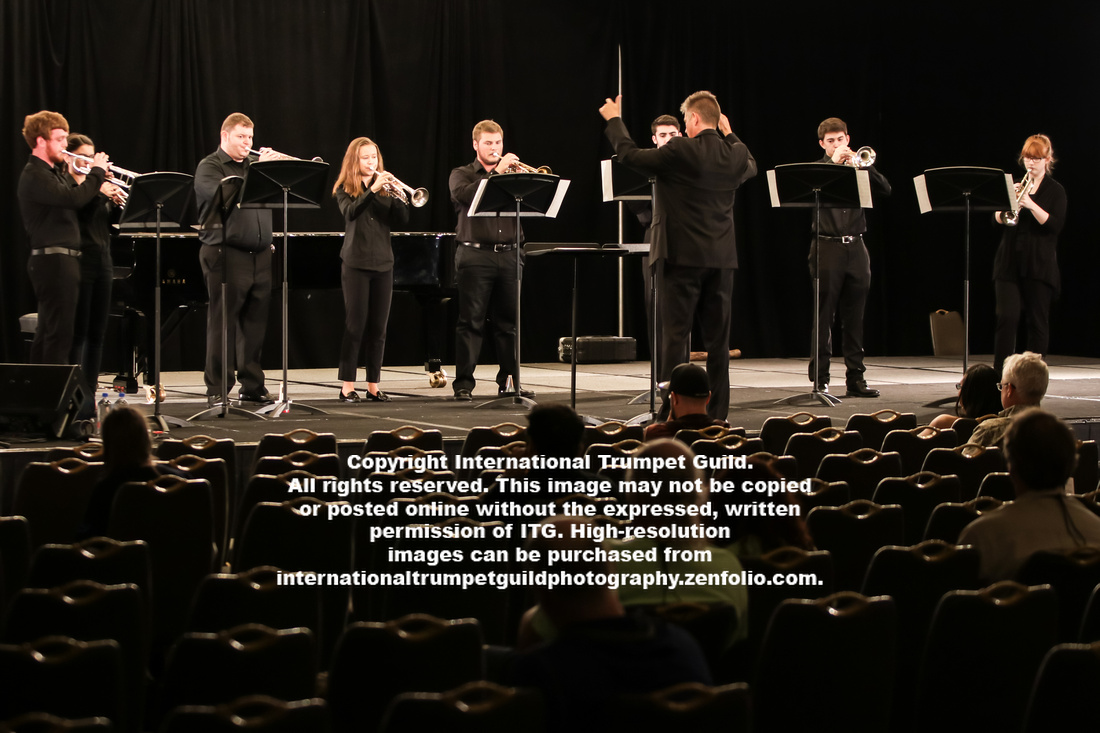 Legacy: Welcome to the Circle by  Kelly Rossum

Dr. Kelly Rossum conducted his own composition honoring the “circle of fellowship and shared experiences that occurs at ITG conferences.” The piece featured colorful harmonies throughout that often morphed into ostinato moving lines, building momentum. His open fifths and suspended fourths created a pandiatonic effect as they rang like bells, and the layered double-tonguing passages built to a jarring climax. The ensemble should be commended for embracing such challenging harmonies and dissonances with confidence while delivering a musical performance with poise. (NV)

The Duquesne University Trumpet Ensemble, under the direction of Chad Winkler, opened the program with Finlandia by Sibelius, arranged by Brian Buerkle for eleven trumpets, including flugelhorn and bass trumpet. A full, rich opening led to the gorgeous, popular melody that floated on top of the foundation established by the ensemble. The group beautifully executed this new setting of the beloved standard. (WK) 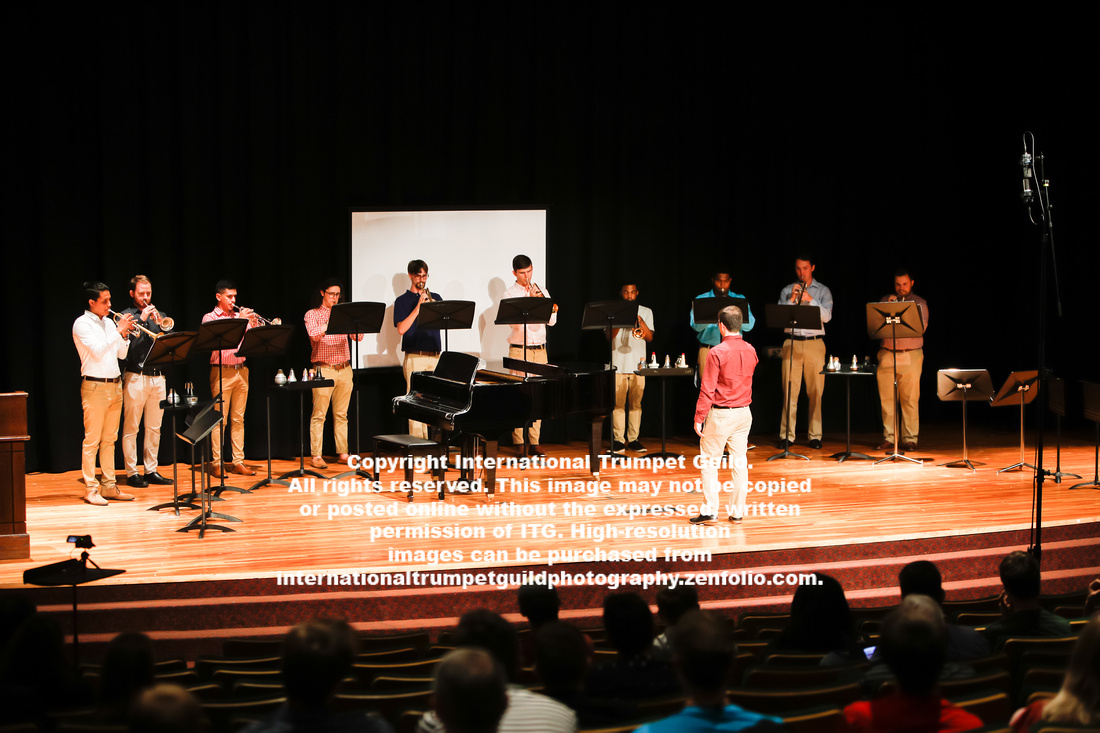 The ten-member trumpet ensemble from the Schwob School of Music at Columbus State University, under the direction of Dr. Rob Murray and conducted by Brandon Dicks, performed Dicks’s own Subduction. The subdued opening gave way to a dramatic crescendo, and the pairing of Harmon and cup mutes created a complex timbre. The piece showcased antiphonal choirs as well as solo and full-ensemble playing. (MM)

The Emporia State University Trumpet Ensemble (plus two trombones) opened their performance with Dr. Gary Ziek’s arrangement of “Habanera” from Carmen. The arrangement featured great interplay among the ensemble and captured the spirit of the original. Their second piece was an original composition by Ziek, titled Ceremony. The group showcased their talents well with great excitement and energy, and their performance served as a great lead-in to the concert that followed. (KM) 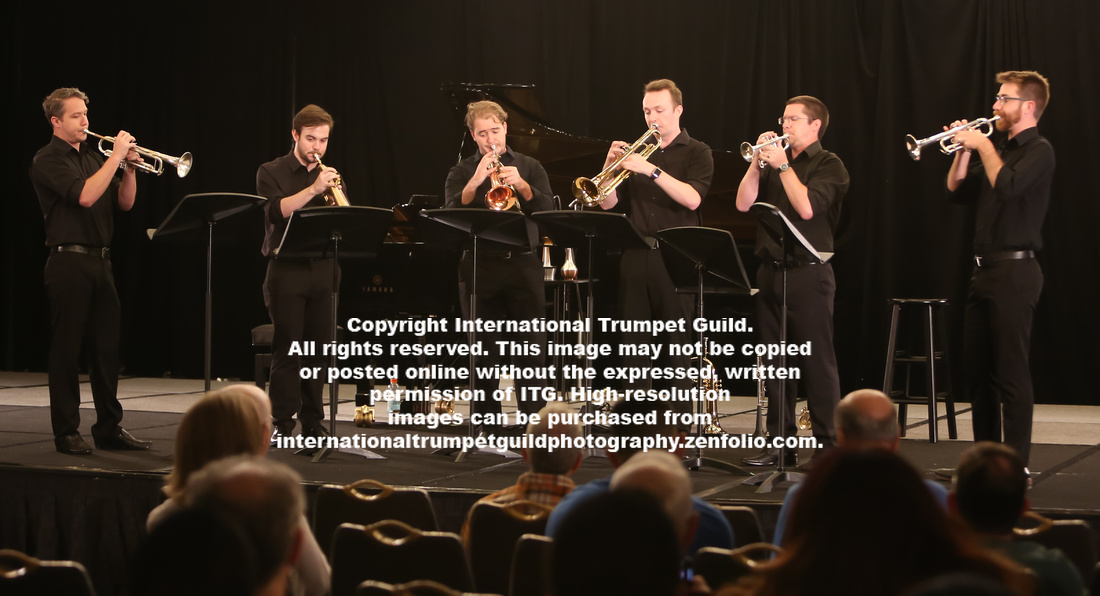 The University of Florida Trumpet Ensemble performed Mendelssohn’s “Scherzo” from A Midsummer Night’s Dream, arranged by the group’s own Ben Elgan, to open Jose Sibaja’s recital. The performance highlighted well the technical abilities of each player in the ensemble and was incredibly colorful due to every performer’s playing a different trumpet. The audience’s reception was enthusiastic and set the tone for the ensuing recital. (MV) 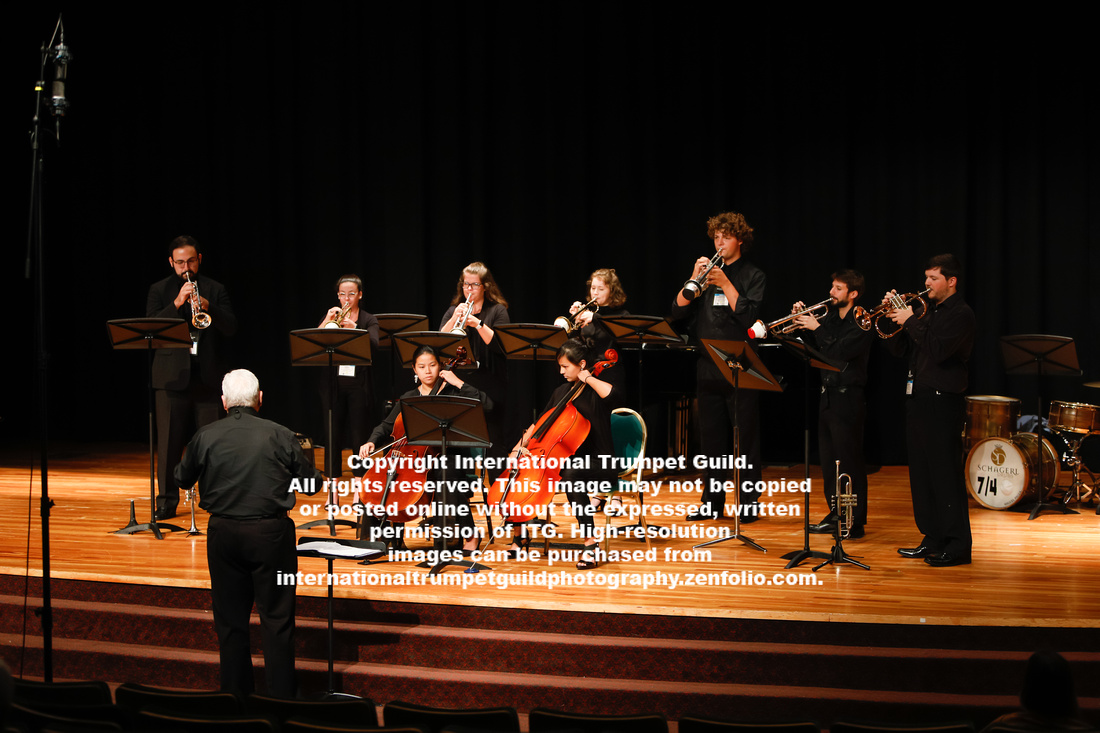 Canzon Cornetto by Samuel Scheidt
Someone Like You by Frank Wildhorn, arr. Jamey Ray and Don McLaurin

The Florida Southern College Trumpet Ensemble presented two prelude pieces under the direction of Dr. Don McLaurin. A trumpet quartet performed Samuel Scheidt’s Canzon Cornetto with beautiful ensemble blend and effortless trading of melodic lines. This was followed by an adaptation of Frank Wildhorn’s Someone Like You, arranged by Jamey Ray and adapted by Dr. McLaurin for nine trumpets and two cellos. The young ensemble’s sensitive playing shone through with cantabile flugelhorn lines filling out this romantic number. (MM) 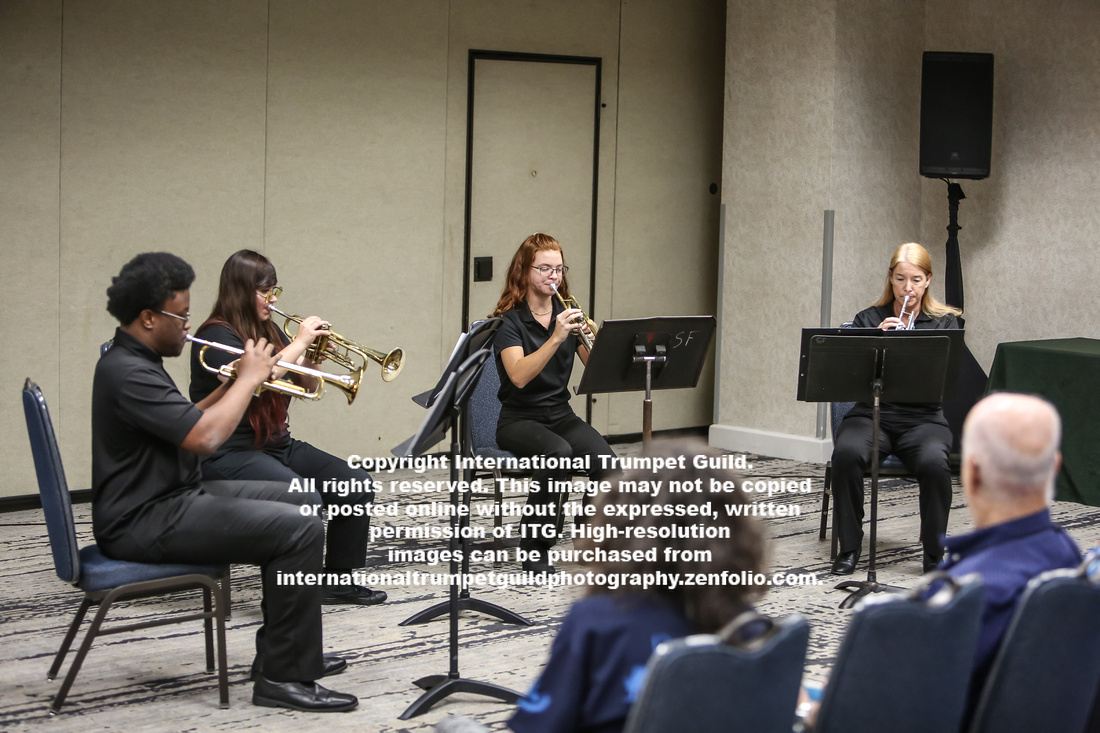 The four members of the Florida Southwestern State College Trumpet Ensemble opened Jose Sibaja’s masterclass by performing pieces by J.S. Bach. Conducted by Dr. Tom Smith, they demonstrated great maturity and musicality in their performance.  Because there were only four players, each was featured. They blended well together and obviously enjoyed playing this time-honored chorale genre. On Charles Decker’s arrangement of Fugue No. 11, from The Well Tempered Clavier, Book 1, they were well balanced and played with great energy and conviction.  It was an especially great way to inspire the high school students who were present that morning to work with Jose Sibaja, and their performance was obviously appreciated by all in attendance. (PS) 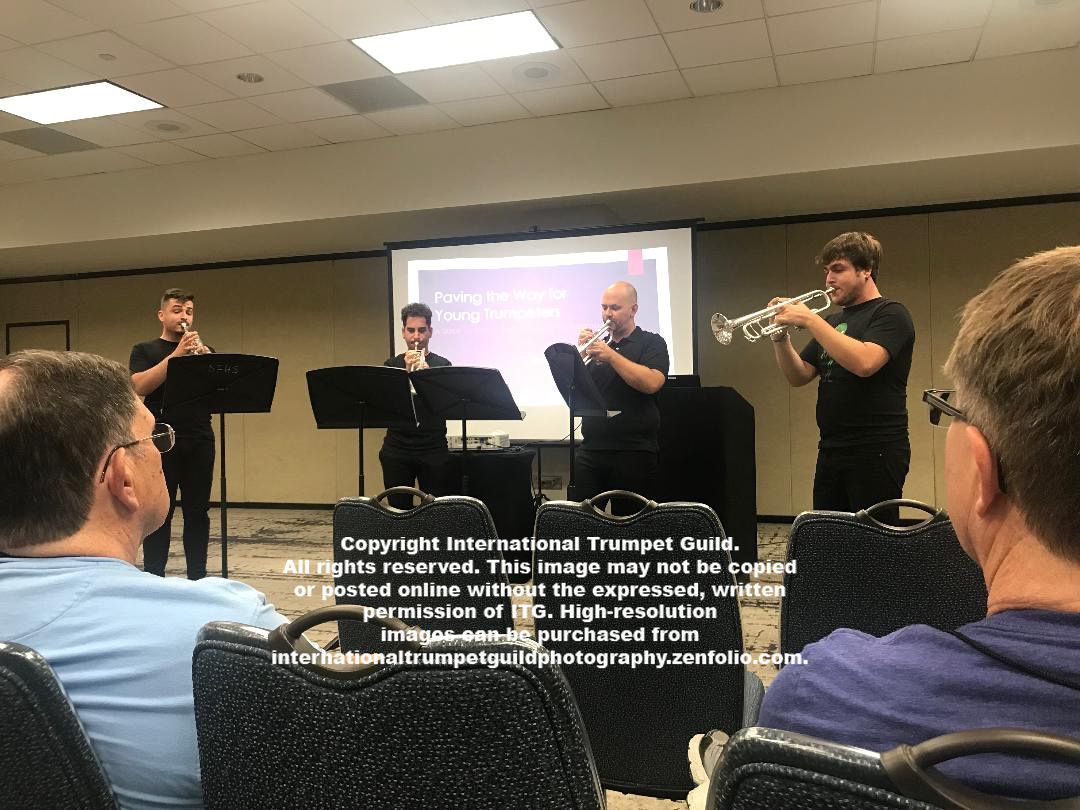 The Global Institute for Music Research Trumpet Ensemble performed Prelude et Intrada by Howard Buss as the prelude to Rebecca Palmer’s youth lecture. The Prelude section began with a sonorous chord, and the following counterpoint highlighted each member’s beautiful sound. The Intrada brought a new brilliant color in a fanfare character to contrast with the opening section. Their performance was well received and prepared the audience well for the lecture that followed. (SB) 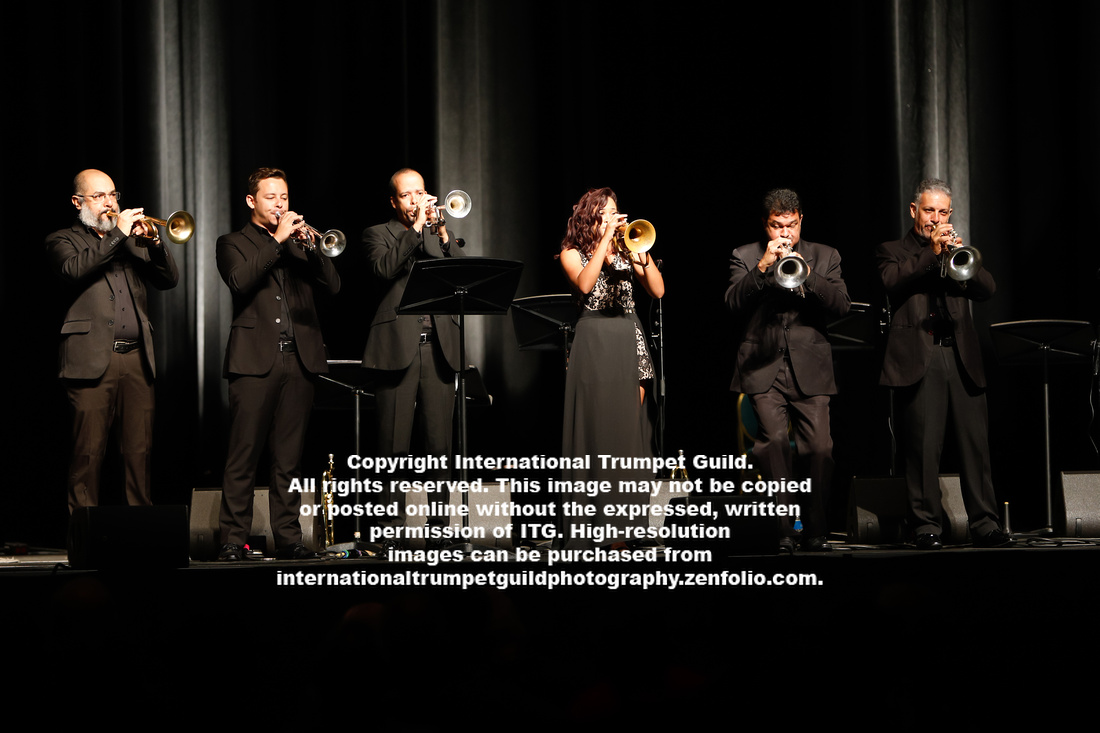 The Trompetes do Cerrado, led by Dr. Antonio Cardoso, performed Fantasia Brasileira by Jose de Silva “Duda.” The six-member ensemble from Brazil played the work with a great sense of style and enthusiasm. In four movements and based on Brazilian folk music, the piece is full of rhythmic complexity. Trompetes do Cerrado created a festive atmosphere with their performance. (KE)

This morning’s recital opened with a performance of three movements from Percy Grainger’s Lincolnshire Posy, as arranged by Brian Galli, one of the ensemble’s members. The trumpet septet executed the work beautifully. A variety of tonal colors across the ensemble provided for great musical intrigue throughout the piece, and the group’s ability to blend those sounds provided a pleasant homogeneity that allowed them to capture the spirit of the work. The ensemble’s hard work and commitment to the music really shone through, and the audience was clearly appreciative of their efforts. (TT)

The students of Mahidol University and Joseph Bowman should be commended for traveling such a long way from Thailand and giving a very polished, exciting performance. Erik Morales’s X1 was named after the first supersonic airplane and provided an excellent opportunity to showcase the students’ strong technique and consistent articulation. The ensemble doubled all five parts, but there was still fine solo playing by individuals and a good ensemble balance throughout. (NV) 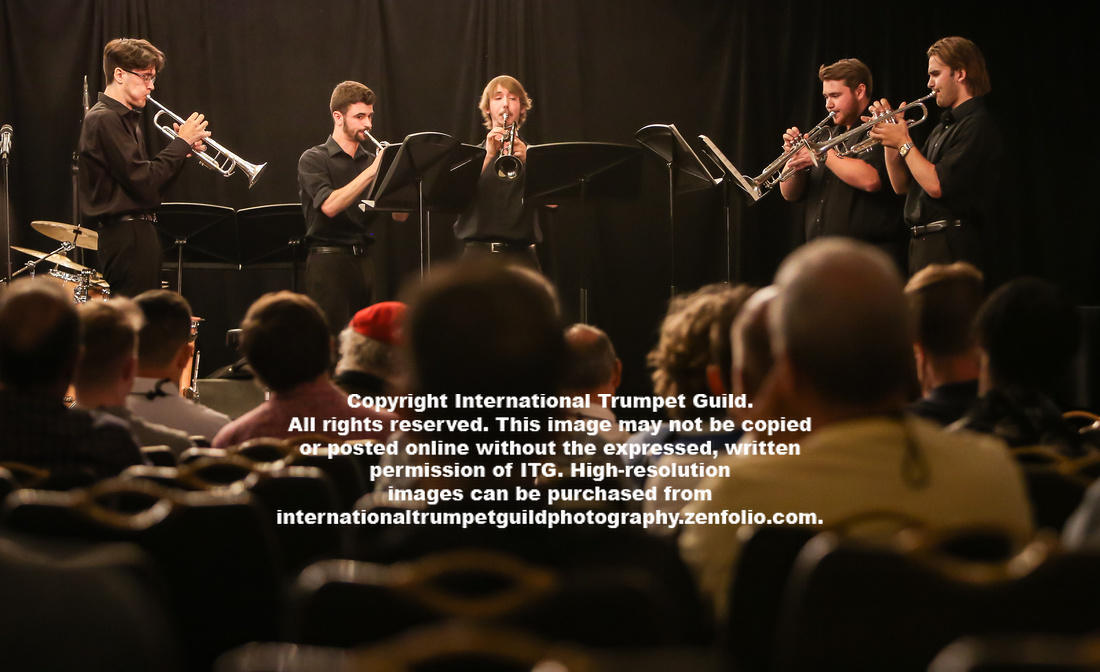 An Overture and a Finale by Ronald LoPresti

Opening the evening’s feature jazz concert was the Southwestern Oklahoma State University Trumpet Ensemble performing Ronald LoPresti’s An Overture and a Finale. From the very opening, the group displayed great precision, blend, and unity of sound and articulation. The odd-meter sections so prevalent in LoPresti’s music were executed within a steady groove, with each member adhering to time with noticeable ease. The quality of the communication across the ensemble, from clearly marked cues to the eyes and ears necessary to absorb them, the players were constantly in sync with one another. (TT) 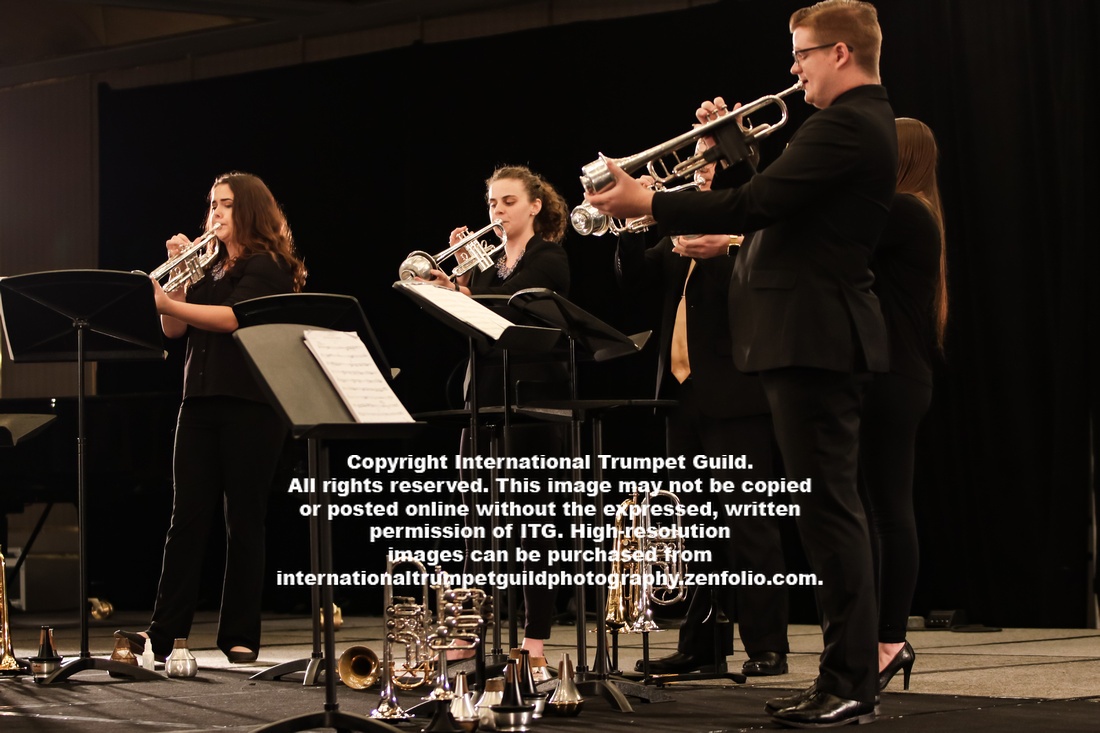 The Texas A&M-Commerce Trumpet Ensemble did an enthusiastic performance of Kent Boulton’s Milestone. The prelude consisted of flourishes and exchanges of runs over several ostinatos. A few lyrical sections showcased the ensemble’s warmth of sound, and pyramids with Harmon mute provided additional contrast. This was an excellent performance with precision and energy throughout. (LE)

The six-member ensemble from the University of Texas at Tyler infused the Renaissance polyphony of Palestrina’s Congratulamini Mihi with exquisite balance, fine intonation, and a warm sound. Their performance of Ewazen’s Concert Fanfare exhibited fine control of expressive dynamics and ensemble precision. (EK)

The West Chester University Trumpet Ensemble performed Erik Morales’s Conquest. They played with beautifully warm sounds, which worked well with the lush sonorities of the piece. The soloist projected brilliantly over the ensemble, and the overall performance delivered wonderful energy and excitement. (KM) 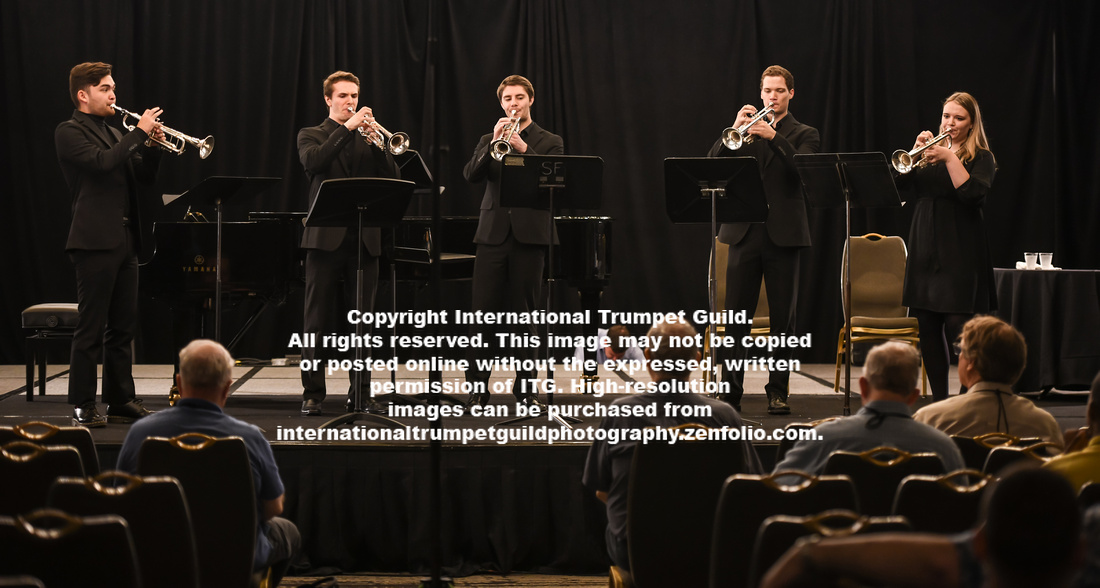 The Badger Brass trumpet ensemble from the University of Wisconsin-Madison put on an exciting performance of Ronald Lo Presti’s Suite for Five Trumpets. The first and third movements featured their clear and pointed articulations, while they demonstrated beautiful lyricism in the second movement. The musicians showcased their talents in a passionate and expressive performance. (SS) 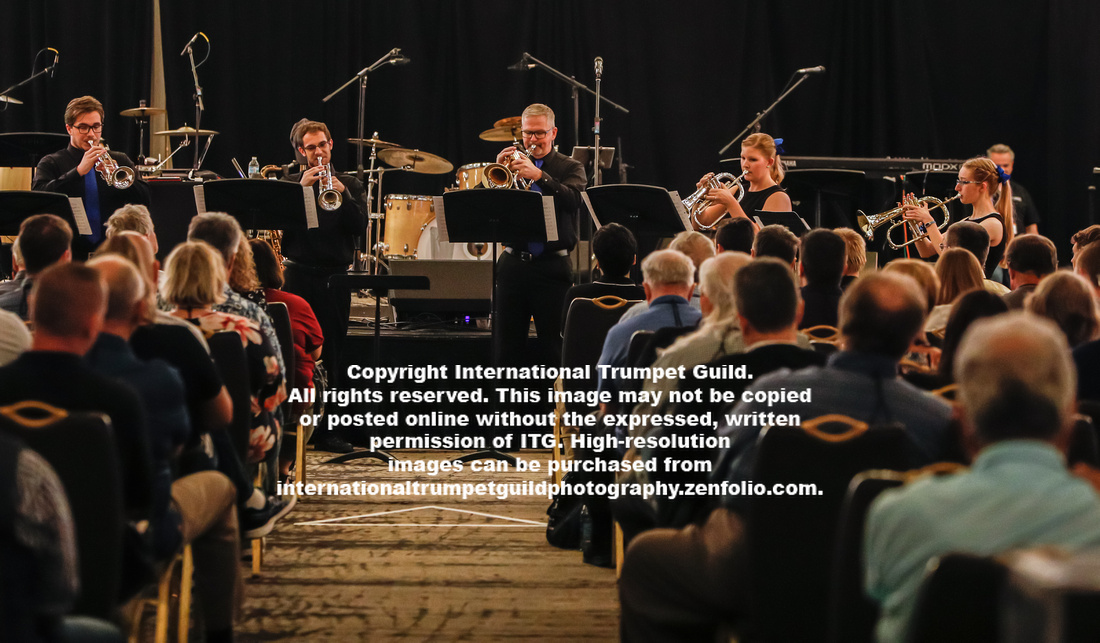 The Westminster College Trumpet Ensemble, directed by Dr. Tim Winfield, performed Erik Morales’s arrangement of Gioachino Rossini’s Overture to The Barber of Seville. The work, scored for three trumpets and three flugelhorns, remains true to the original. There was an obvious sense of vitality and energy to the six-member ensemble’s performance. (KE)