Before the concert began, ITG President Cathy Leach presented the Guild’s most prestigious award, the ITG Honorary Award, to Marie Speziale, who accepted the honor with a gracious speech. Conference Director Jean-Christophe Dobrzelewski then introduced Pacho Flores and explained that the program was structured to progress from the Baroque era to the present and that Flores would be using a wide variety of Stomvi instruments displayed on a table on the left side of the stage. Accompanied by the ITG Festival Orchestra, Flores conducted while performing, standing in the center of the strings. When he wasn’t playing, he turned around to face the orchestra and conduct in the usual manner. Most of the time, however, he led as a chamber musician, nodding and dancing to the beat while facing the audience, often directing with his right hand while continuing to play the trumpet. And did he ever play! Flores possesses a rare ability to perform absolutely anything in any style and on any horn (piccolo through flugelhorn and corno da caccia)—from memory, while conducting—with effortless mastery and peerless artistry. Pacho Flores embodies a level of virtuosity that borders on the supernatural. 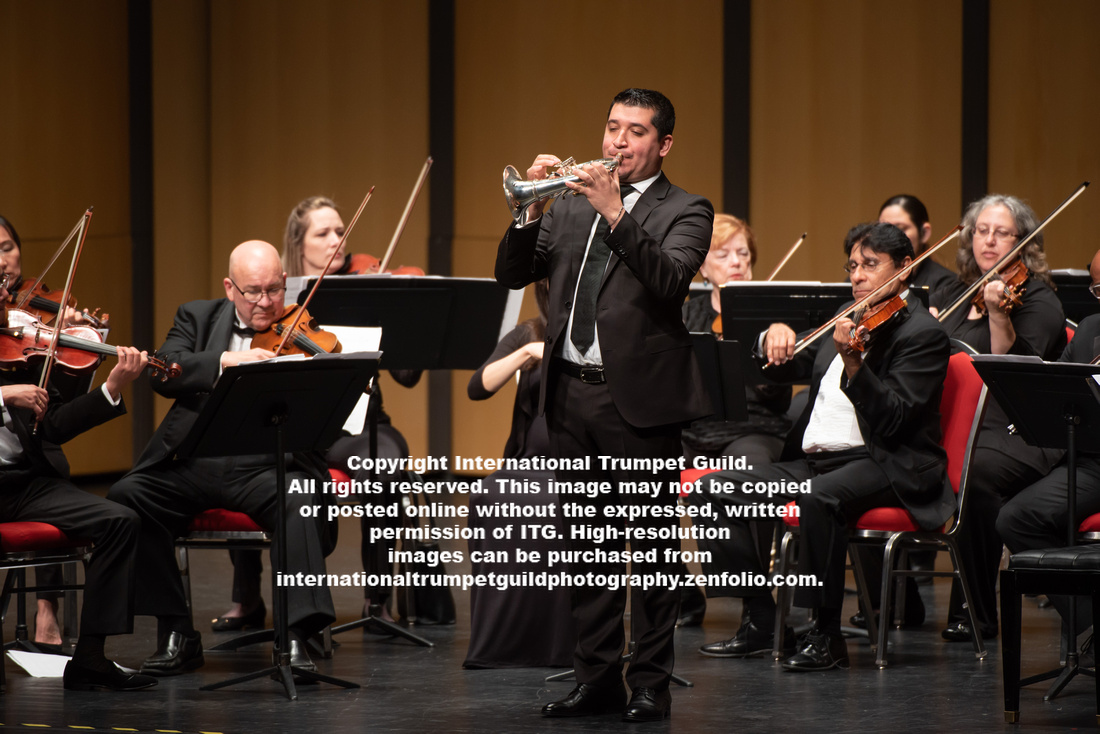 The program began with Efrain Oscher’s arrangement of Daquin’s Le Coucou with Flores dazzling the audience on piccolo trumpet through a flurry of spinning sixteenth notes tossed off with impeccable élan. Switching to a corno da caccia (similar to a valved posthorn), he gave an unforgettable performance of the Neruda concerto. Replete with understated elegance, inventive cadenzas, and tasteful ornamentation, Flores entranced the audience with the seductive dark sound of the instrument. 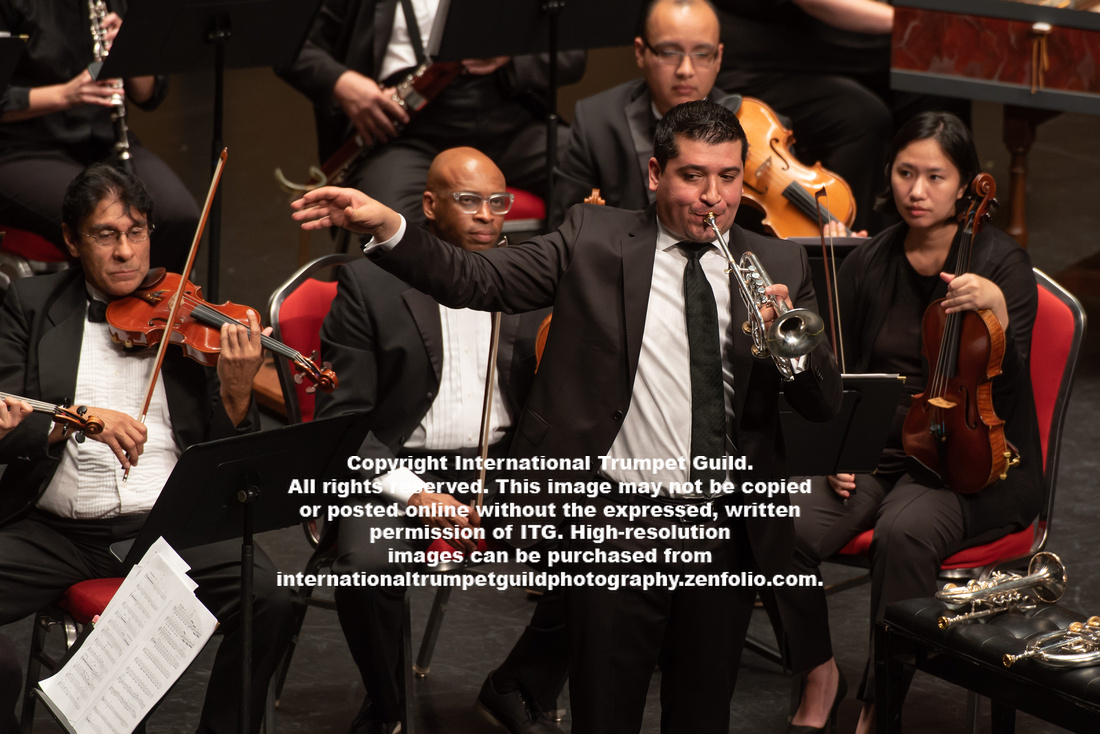 Flores introduced the next piece, Oscher’s Barroqueana Venezolana 2, by referring to his “little arsenal by Stomvi” as he moved three of the instruments to a padded piano bench next to him by the cello section. Written for Flores and designed to “combine Baroque music with Venezuelan elements,” the three movements featured playful piccolo pyrotechnics, a seductive serenade showcasing the low register of the four-valve Stomvi Titan flugelhorn, and a mixed-meter dance reminiscent of neoclassical Stravinsky. Flores returned to piccolo trumpet for an arrangement of the Aria from Villa-Lobos’ Bachiana Brasilena No. 5, which featured a soulful cantabile line over restless pizzicato strings. The Latin American set continued with arrangements of two Piazzolla pieces, Escualo and Invierno Porteno (a jazzy flugelhorn showcase), and two pieces composed by Flores—Morocota and Labios Vermelhos (a delightful samba). The final selection on the program was Oscher’s Soledad, which began with a poignant solo for the English horn, followed by increasingly elaborate variations from Flores, culminating in a blizzard of figuration leading to a final climax. The audience leapt to their feet in an immediate ovation, bringing Flores back for multiple bows until he agreed to play an encore, a tender ballad that he dedicated to ITG Honorary Award Winner Marie Speziale. When it was all over, he got down on one knee, blew her a kiss, and bowed like a gallant Knight of the Realm. (EK) 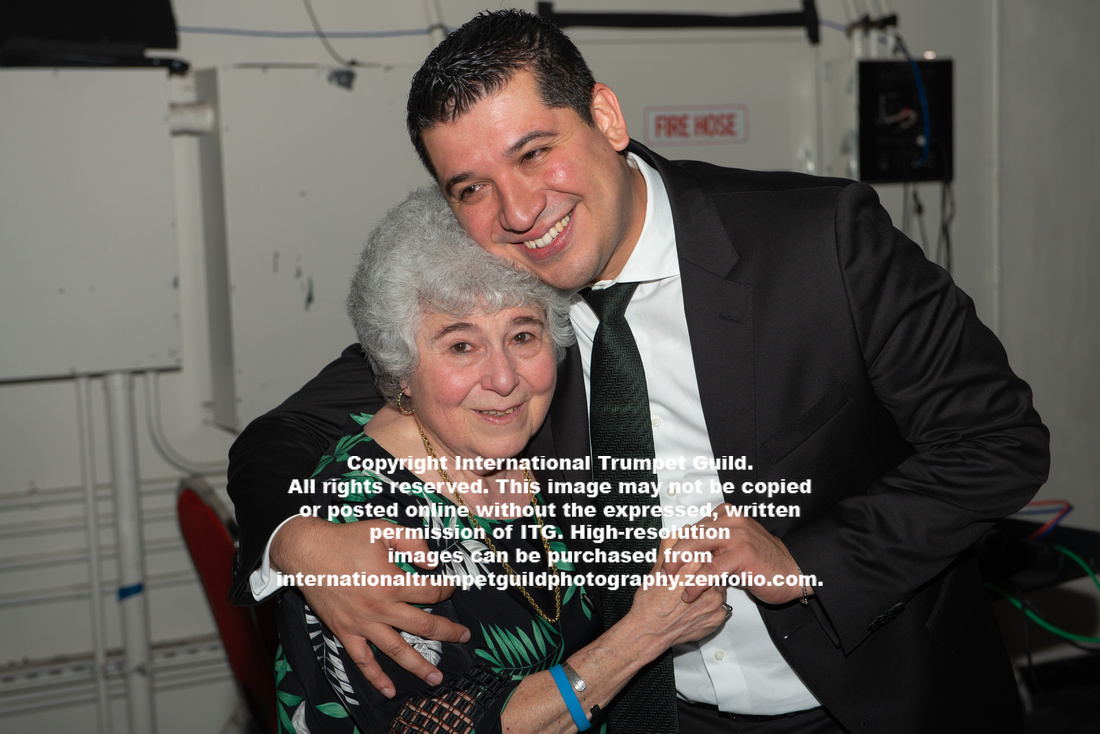 Jazz in its many forms was represented in the final concert of the 2018 ITG Conference. The first ensemble to perform was not listed in the conference program. The Biohazard Brass Band of the 323rd Army Band from Fort Sam Houston took the stage to the surprise of the audience. The nine-piece band (three trumpets, trombone, baritone, sousaphone, tenor saxophone, baritone saxophone, and drums) provided a high-energy, non-stop fifteen-minute set that established the mood for the evening.

The Jim Cullum Jazz Band is a classic New Orleans-style jazz band performing music of the early twentieth century. And they swing! The band is comprised of cornet (Jim Cullum), clarinet, trombone, piano, bass, and drums. Their opening set included Louis Armstrong’s Mandy, Make Up Your Mind (1924) and Original Jelly Roll Blues (1905) by Jelly Roll Morton. When brought to the stage to join the band, Doc Severinsen told the audience that we all need to hear more of this kind of music, and that it is “salve for soul.” 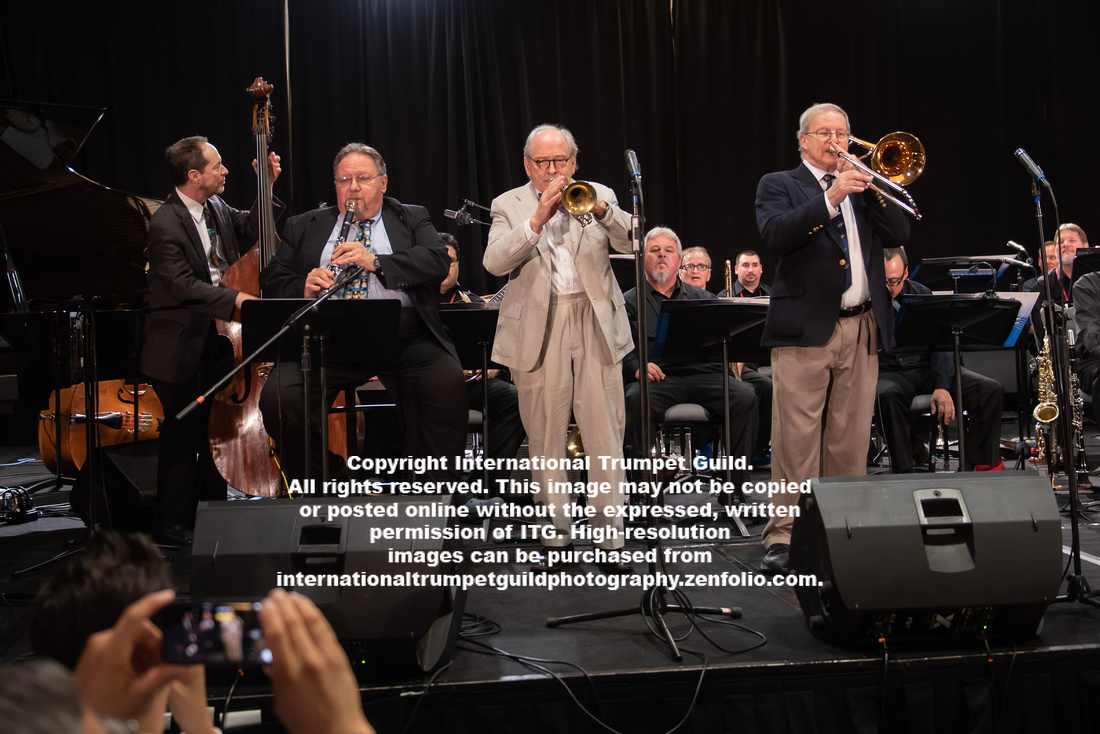 Doc then performed Louis Armstrong’s West End Blues (1928) and What’s New? (1939) with the Jim Cullum Jazz Band and used South Rampart Street Parade (1937) as a transition to the appearance of the  San Antonio Jazz Orchestra. Organized in the late 1980s, the San Antonio Jazz Orchestra is made up of San Antonio area band directors, elementary music teachers, private instructors, and current and retired military bandsmen. The group is a regular performer at area jazz festivals, Texas Bandmasters conventions, and Fiesta events. 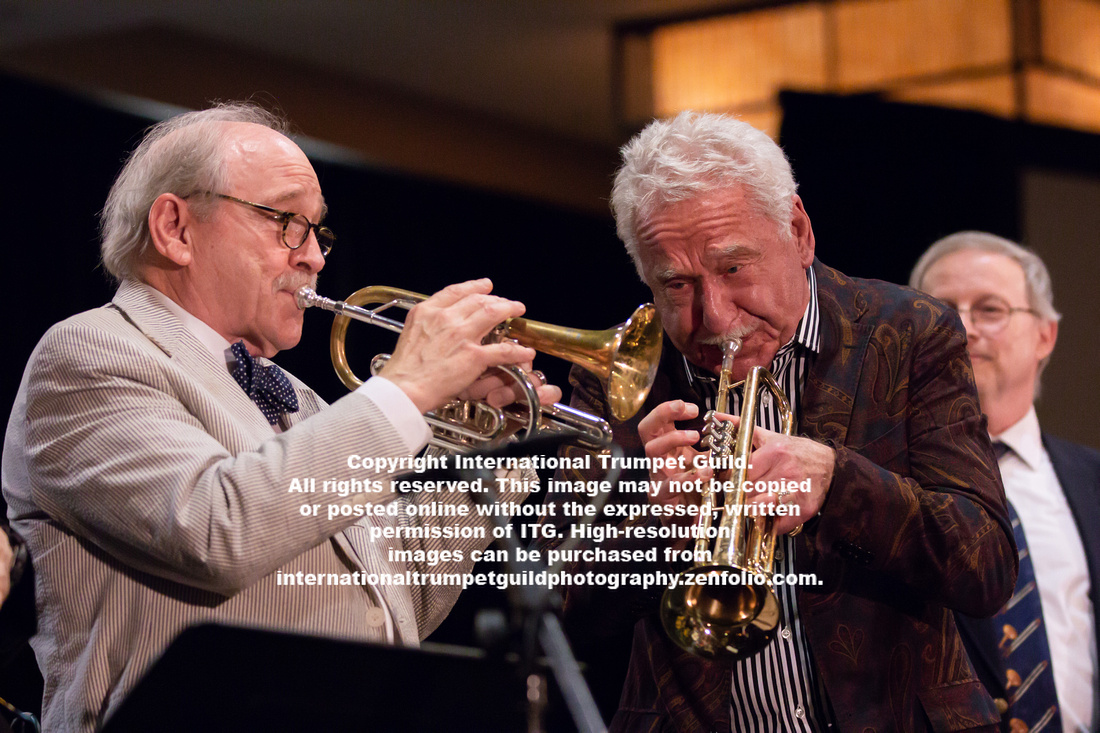 Doc played September Song, which he described as a “sad song, so I had it arranged as a soft shoe.” Doc Severinsen is a musical icon and an American treasure. His sound is unmistakable, even at his age of 90 years young. The audience showed their love for him through numerous standing ovations throughout the evening.

Jens Lindemann and Ryan Anthony joined Doc on stage for a beautiful rendition of Georgia On My Mind, and Scott Belck dazzled the audience on A Night in Tunisia. The evening concluded with all of the evening’s soloists performing 12 O’Clock Jump (at almost exactly midnight). This concert was a fitting conclusion to an exciting and memorable conference. (KE) 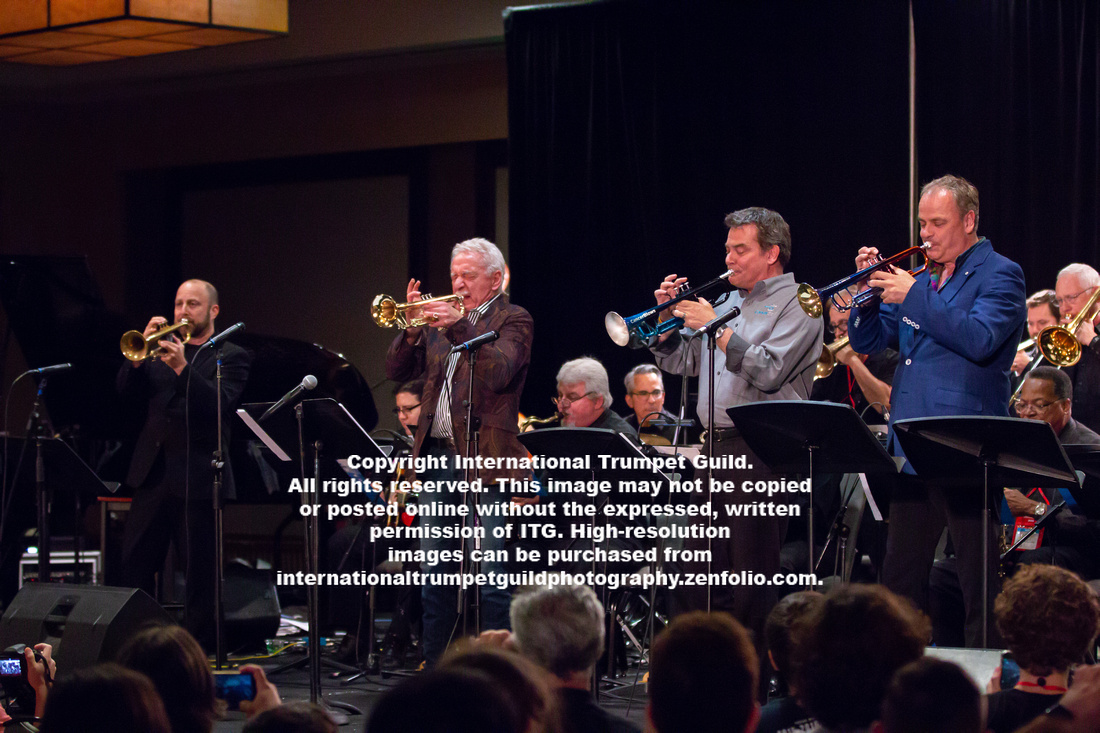