Scott Hagarty began the session talking about the physical and mental reasons for warming up, stating that the primary purposes are to warm up the muscles of the face and focus the mind. A thorough handout was provided, covering the basic fundamentals of playing. The warm-up exercises consisted of long tones, finger exercises, slurring and flexibility studies, range-expanding exercises, and articulation patterns. Many of these exercises were extracted from different method books by Nagel, Plog, Bai Lin, and Vizzutti. Hagarty made a clear distinction between warmup and routine. While his warmup generally takes about ten minutes, his practice continues directly into his daily routine. He talked about how important it is to organize your practice session and provided examples of how to be efficient. This brought about many excellent questions from the audience. (JBu)

The student participants started their morning with an engaging Youth Day warm-up session led by Mary Thornton. Naming the session “Eat your Wheaties,” Thornton compared trumpet playing to the intense training and dedication of Olympic athletes. In the same analogy, she emphasized the importance of using a warmup to do simple things very well and reminded the class that every bit of playing one does determines the player they will be. Before even playing a note, Thornton challenged the students to engage their minds and describe their mental concepts of a great trumpet sound. Thornton then took the students through some exercises to focus on developing their fundamentals. She demonstrated parts of the James Stamp method and several Herbert L. Clarke studies. Flexibility with regard to warmups was stressed by Thornton as she noted the importance of finding a warmup that works and is adaptable for each individual. (EM) 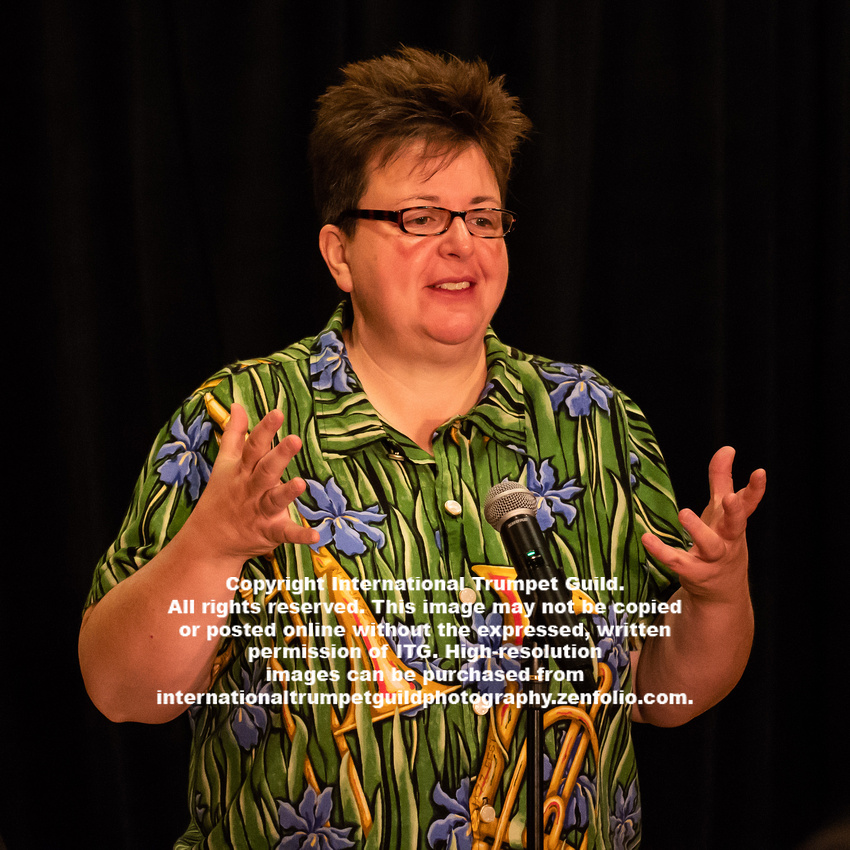 The Junior Division of the ITG Youth Competition began early Saturday morning with Jeremy Bryant’s performance of Arban’s Fantasie Brillante. Playing with a strong, resonant sound, Bryant navigated the technical and musical aspects of the cornet solo very well on his B-flat trumpet. Dayoung Kim performed Bellstedt’s Napoli and captured the charming nature of the piece exquisitely on the B-flat cornet. Kim’s technique was very impressive, and she executed each variation with precision. James McCaffrey was the third competitor and performed Ropartz’s Andante and Allegro with a robust sound and a clear understanding of the music. McCaffrey played musically, nicely contrasting the slow, lyrical moments of the piece with the fanfares found in the Allegro. Jaemin Park performed the Arutunian Concerto magnificently. Park’s playing was precise and clean throughout the entire piece. His sound was gorgeous as he played the slow, lyrical melodies, and his cadenza was flawless. Jack Towse gave a very strong performance of the first movement of the Peskin Concerto No. 1. Towse did well to convey engaging musical ideas and demonstrated impressive technique. Songho Wui was the final competitor of this Junior Division and performed the first movement of the Hummel Trumpet Concerto. Wui played with vigor and demonstrated a clear understanding of the music. Sheri Samtorelli also played beautifully on the piano, performing with four of the six competitors. The Junior Division of the ITG Youth Competition was a hit, and it was exciting for the audience to witness the outstanding playing of all the young competitors. (SW)

Chris Gekker began his clinic talking about articulation. Referencing his own books on this topic, Gekker began by providing further clarification beyond what is printed in them. Gekker shared the value of legato tonguing, referencing many different pieces where it would be suitable to use this technique. Throughout the clinic, audience members were encouraged to ask questions, one of which was about the many different kinds of articulation markings that occur in music. Gekker provided the audience with a greater understanding of what certain articulations mean from one composer to another. Gekker went on to discuss how he still considers himself a student of the trumpet and talked about jazz musician Rick Willey and his pedagogical books and how they have influenced Gekker’s teaching. He concluded the clinic with a discussion of the professional world of trumpet playing. (BC) 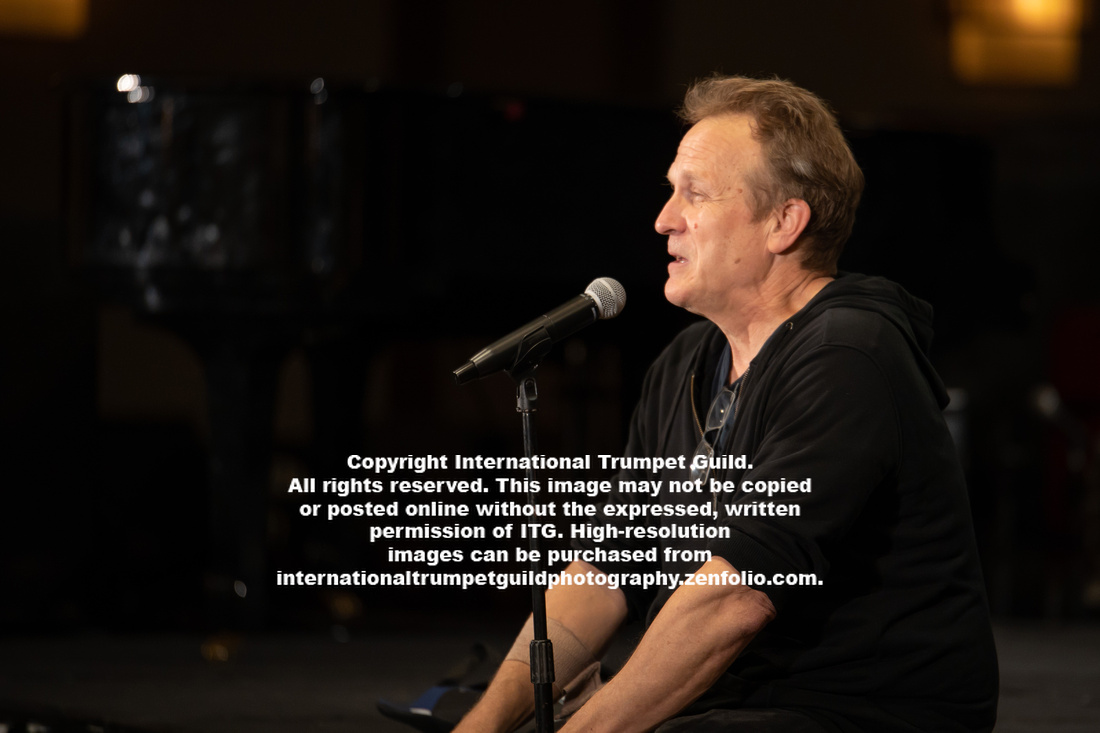 Steve Leisring’s clinic served as a practical demonstration of various breathing and buzzing tools. He displayed a table full of gadgets, stating that many students often believe these will only teach them to inhale properly. However, he demonstrated with several volunteers that these tools can help maintain a relaxed and natural exhalation, especially when reacting to the resistance of the trumpet. With a “less is more” approach when it comes to physical processes, Leisring utilized various devices to create a desired product, including a homemade resistance buzzing device fashioned from a Coke bottle and PVC pipe. After using each device for only a few seconds, his volunteers visibly relaxed and improved everything from simple scales to the “Ballerina’s Dance” from Petrouchka. Part of the Youth Day activities, this creative presentation was an excellent resource for teachers and students alike. (MY) 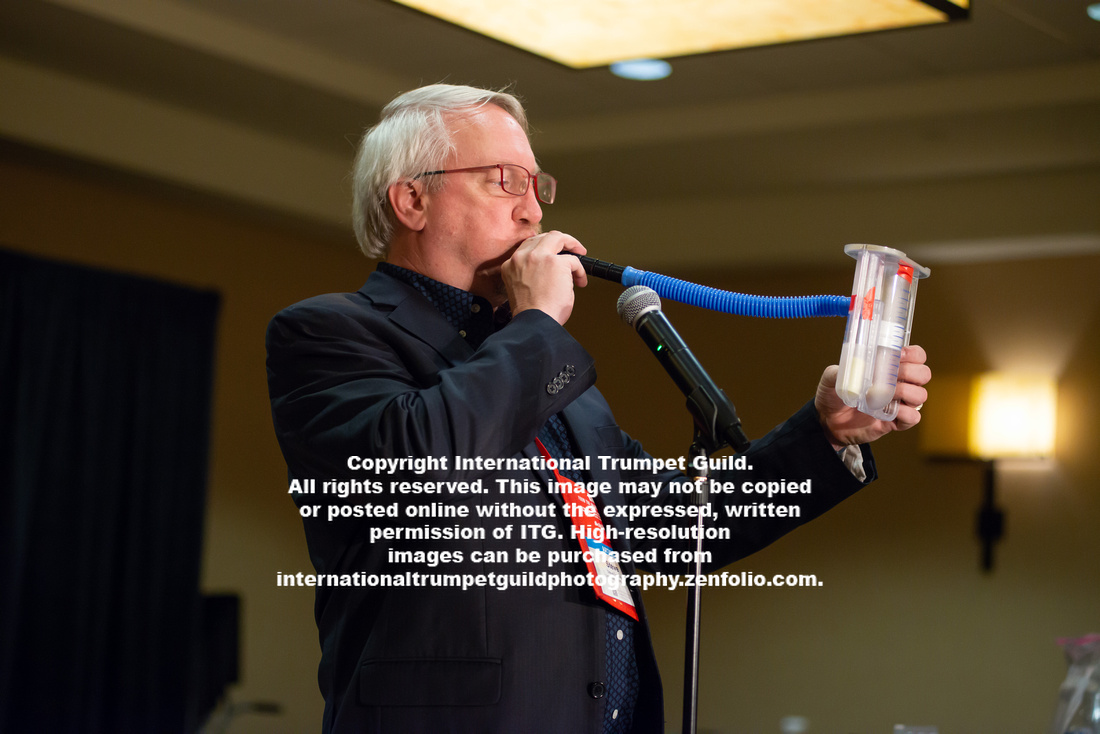 The Senior Division of the ITG Youth Competition featured six finalists who performed a solo work of their choice. Emanuel Acevedo’s performance of Goedicke’s Concert Etude featured a mature sound and exceptional display of multiple tonguing throughout. Stefan Filip displayed a superb sound with an elegant style in the first movement of Hummel’s Trumpet Concerto. Ryan Lee, who performed the first movement of Peskin’s Trumpet Concerto, gave a powerful performance, filling the ballroom with sound. Michael Peery’s beautiful rendition of the Ketting Intrada featured a high level of sophistication and finesse throughout. William Rich performed Enesco’s Legend with outstanding musicality and tonal brilliance. The final performer was Alexander Tung, who gave a captivating and poised performance of the Hummel Trumpet Concerto. (JBr)

Lucy Humphris’s recital contained an intriguing mixture of the antique and modern. Accompanied by pianist Rebecca Wilt, Humphris opened with a rich, pure piccolo trumpet sound, and her take on Respighi’s orchestration of “Balletto” from Ancient Airs and Dances, Suite No. 1 was captivating. Humphris continued with a world premiere that used the much-maligned “double buzz” to simulate the experience of a hot desert wind roaming a barren landscape. Her arrangement of Janacek’s piano composition In the Mists displayed some soothing lyrical playing. Originally written for cello, Max Bruch’s Canzone needed a few tasteful tweaks to become accessible for the three-valve flugelhorn; however, Humphris’s inventiveness knows no bounds. Takemitsu’s Paths for unaccompanied trumpet portrayed a conversation between two close friends. The recital ended with an energetic and exciting performance of the Harry James Concerto. Style and sophistication to behold. (AD) 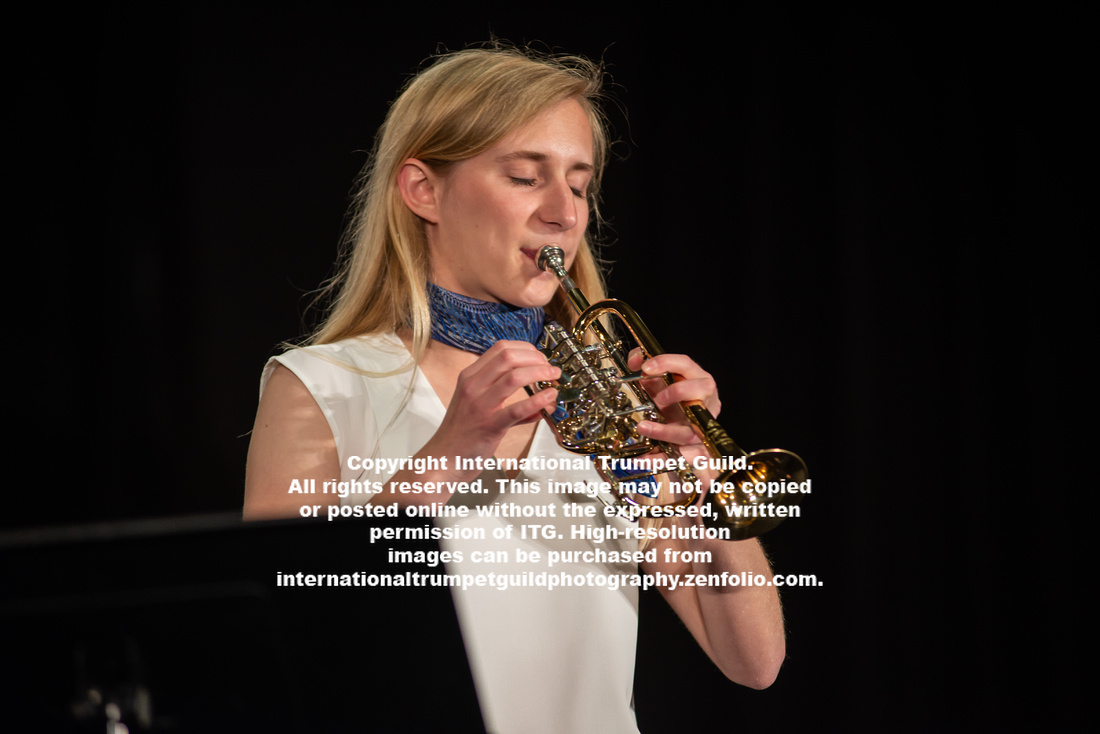 Taking the stage with his characteristic charisma and energy, Jens Lindemann introduced fellow Canadian Brass alumnus Ryan Anthony and the Spanish Brass for a unique impromptu duo version of the ubiquitous Arutunian Concerto. In fact, Lindemann had asked Ryan to perform only earlier that morning! The large audience was rapt by the brilliant and humorous performance in which the Spanish Brass accompanied Lindemann and Ryan. Next, Lindemann was joined by the Conference Jazz Trio (Andrew Bergmann, Brandon Guerra, and Aaron Prado) for a stunning rendition of Piazzolla’s Oblivion and the thrilling jazz tour de force Dreaming of the Masters by Allan Gilliland. The event concluded with a breathtaking improvised duet of "What a Wonderful World" by Lindemann and Anthony. Throughout the morning, a spirit of childlike joy and spontaneity was on full display, and was inescapably infectious to all the attendees. (BH) 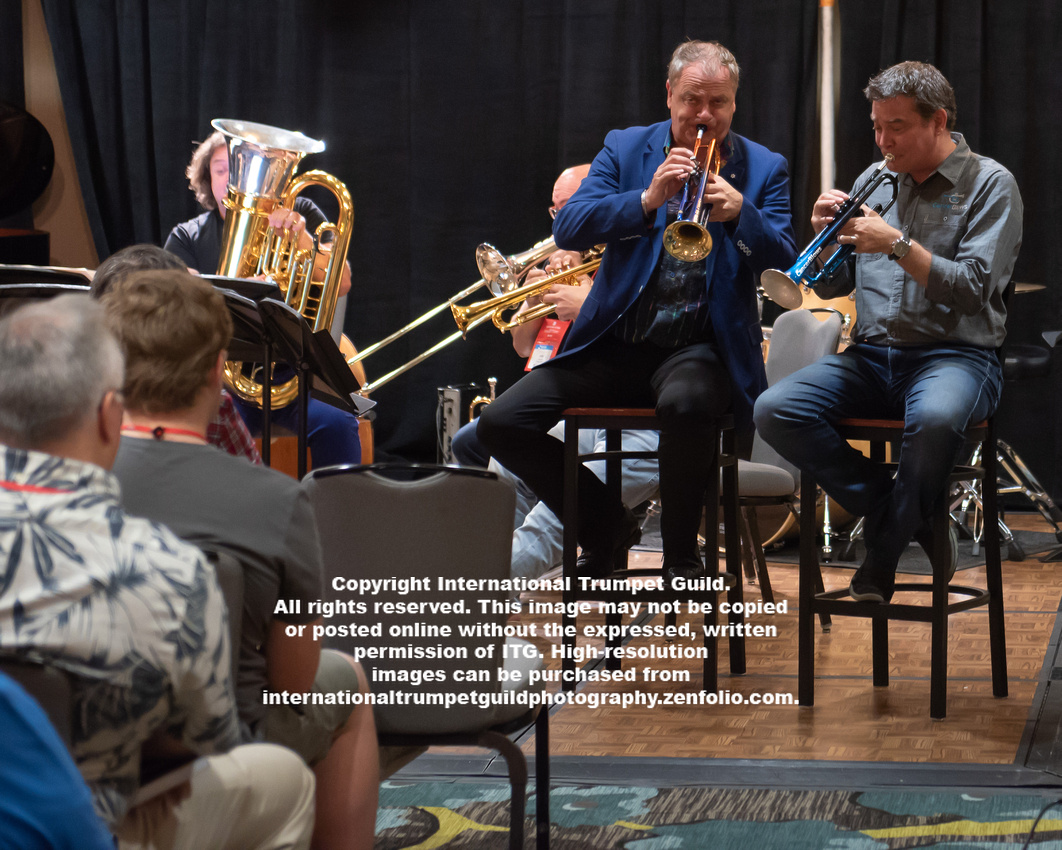 The M5 Quintet began their performance with an inventive performance of Kevin McKee’s Vuelta del Fuego, adding engaging choreography to an already masterful performance. The program consisted of arrangements by Bach, Chopin, and Humperdinck, each in a completely unique and modern style. Their most inventive of these arrangements was a theme and variations on Der Alte Peter in the styles of Bach, Mozart, Wagner, Strauss, Orff, and Mariachi. Several of the pieces featured various members of the group, allowing them to show off their virtuosic talent. One particularly beautiful arrangement featured the quintet playing "Michelle" by The Beatles while spaced throughout the audience. By the end of the concert, the audience was so enraptured by their performance that they were treated to two encores. (BC) 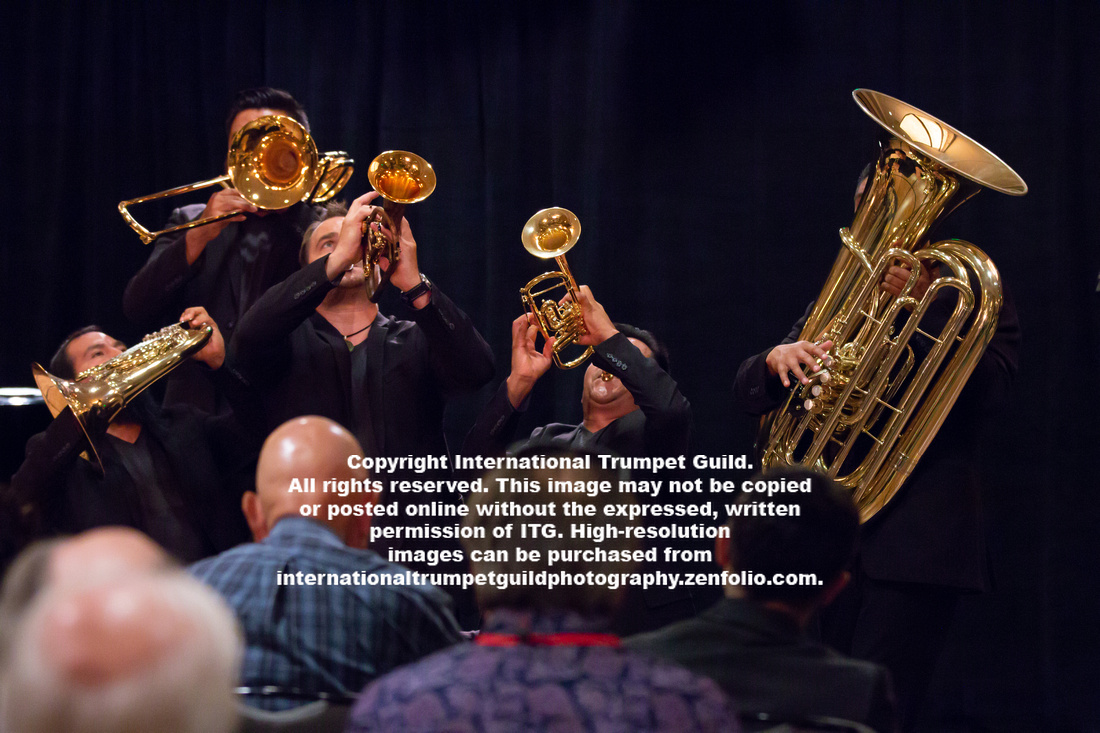 With an alternation of mixed-meter, flashy technical runs and smooth, song-like passages, Jason Dovel’s Giza Necropolis was the perfect opener for the 2018 Festival of Trumpets. The ensemble, conducted by Bradley Hogarth, executed the piece at an extremely high level, matching throughout and achieving great musicality. (WK) 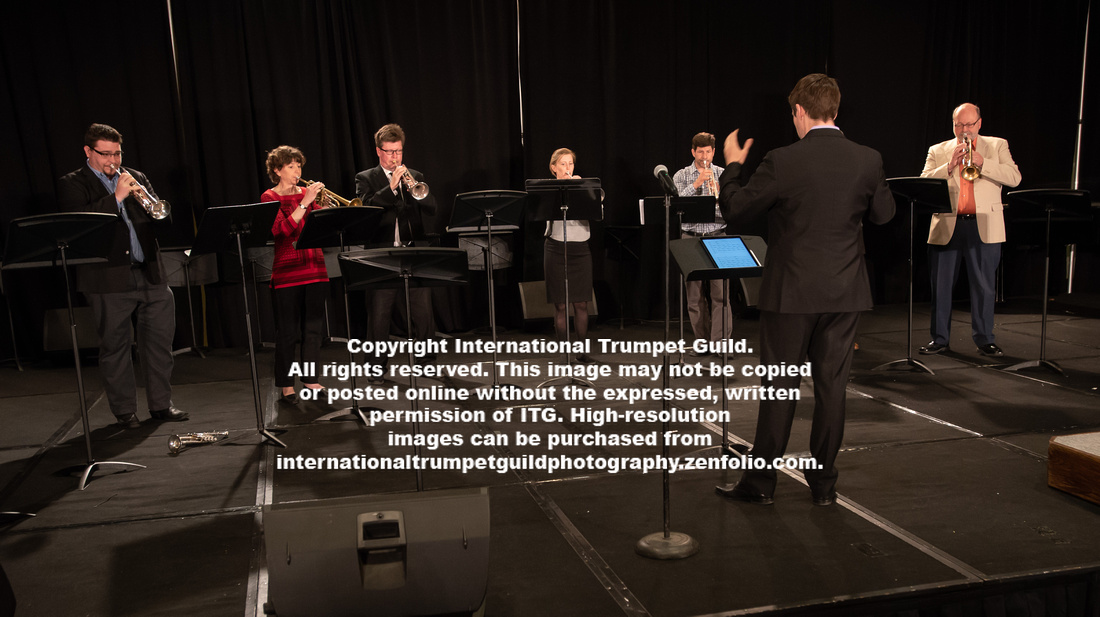 Second on the program was a twist on an old favorite, Charlier’s Etude No. 2. Theo’s Tango gave new life to the standard etude, mixing Charlier’s themes with original material in the style of a tango. The entertaining piece was arranged and conducted by Greg McLean and was a great piece to keep the program light and loose. (WK)

In a break from the program, ITG Youth Competition Director Marc Reed came to the stage to announce the winners and distribute the awards for the junior- and senior-level competitions that took place during the conference. (EK)

John Elkjer’s version of "Amazing Grace," conducted by David Scott, was a lovely addition to the program, exploring how much someone can manipulate a given melody to create new musical ideas. From the standard hymn to more contemporary interpretations, this new take on a classic hymn tune was a delight to hear. (WK) 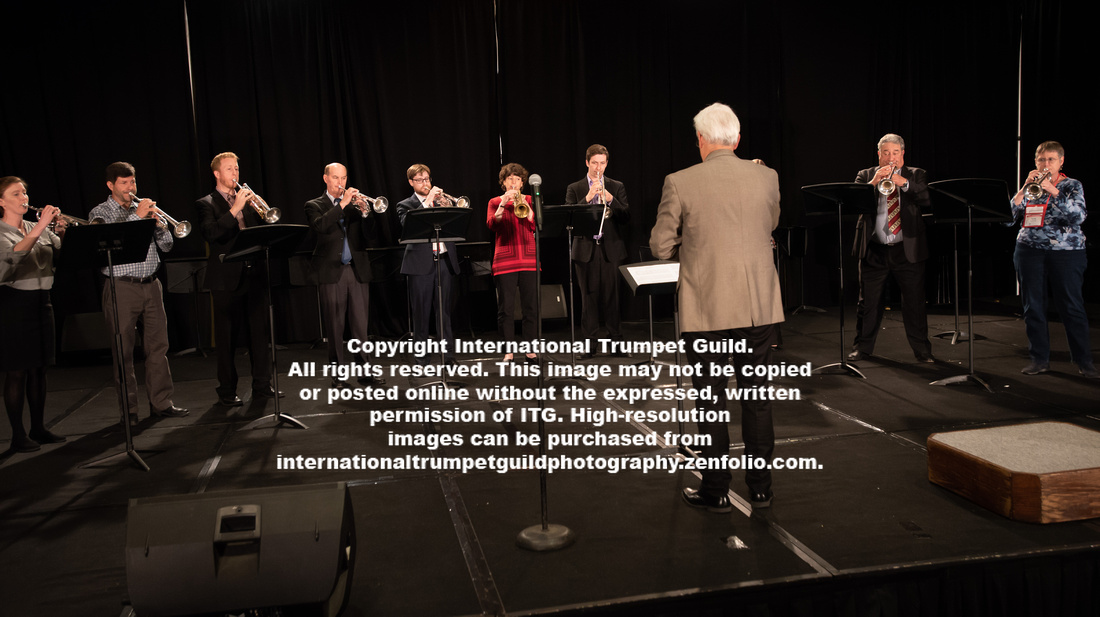 Paying homage to legendary cornet soloist Herbert L. Clarke and pulling musical material from his solos, etudes, and exercises, Kody J. Euteneier’s Prelude and Fugue on a Theme by Herbert L. Clarke was a wonderful way for the Non-Pro/Comeback Players ensemble to celebrate one of the greatest players in our history. (WK)

To honor the memory of ITG Past President Stephen Jones, who passed away just a few weeks before the conference, Judith Saxton, Alan Siebert, and Brian Evans performed Saxton’s moving tribute, Steve Jones, Remembered. The piece began with Saxton reading six words that captured the character and integrity of Jones. Each trumpeter then played a lyrical passage alone, and the three ended the piece with an emotional unison passage. (EK)

Another memorial followed as ITG Past President Brian Evans read the names of prominent trumpeters who had died since the previous year’s conference (an ITG tradition that began three years ago). Festival of Trumpets Director David Turnbull directed his own arrangement of “Nimrod” from Elgar’s Enigma Variations, scored for thirteen trumpets, which was a beautiful tribute to our lost friends. (EK)

The festive mood returned with a lively performance of Sammy Nestico’s Portrait of a Trumpet, arranged and conducted by James Olcott. Featuring a fantastic solo by Scott Belck, the ensemble masterfully simulated the sound of a big band with Olcott’s colorful scoring for two piccolo trumpets down to flugelhorns and a bass trumpet. (EK)

After ITG Scholarship Director Jennifer Dearden took the stage to award certificates to the Conference Scholarship recipients, Kenyon Wilson’s Möbius was given a fine performance by an ensemble of eight trumpeters, conducted by Luis Engelke. The piece began in a poignant minor mode and alternated between agitated fugato sections and lyrical episodes, punctuated by fragments of the fugato theme. (EK) 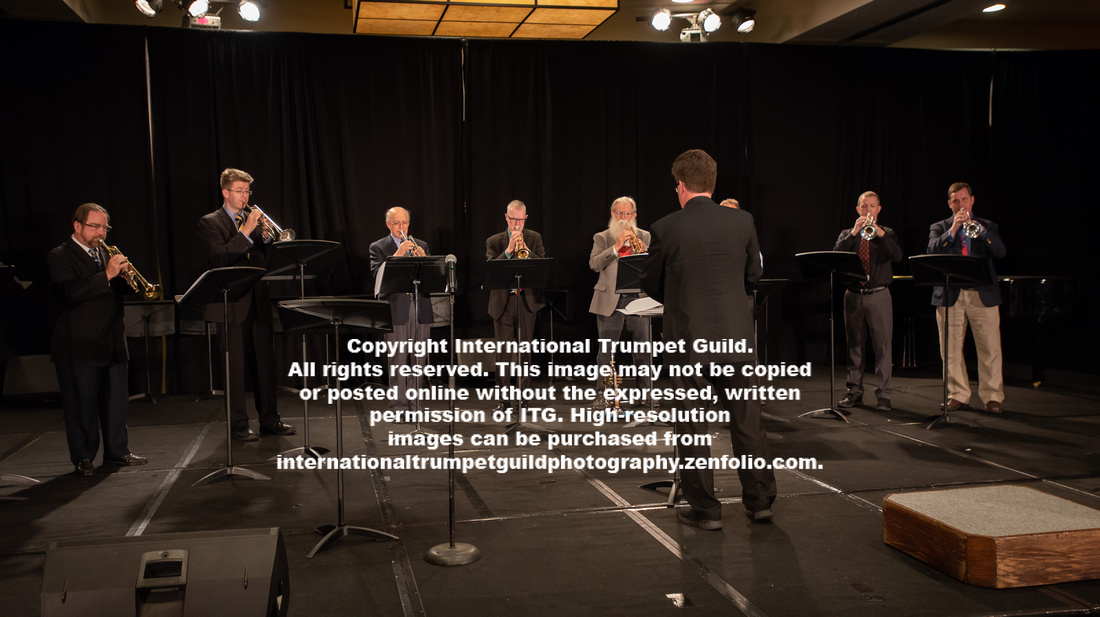 A crowd of trumpeters took the stage for the final selection, Grieg’s Huldigungsmarsch (Triumphal March), arranged and conducted by John Irish. Featuring powerful tutti statements in unison octaves, Wagnerian harmonies, and heroic grandeur, the performance was a fittingly festive conclusion to the concert. (EK) 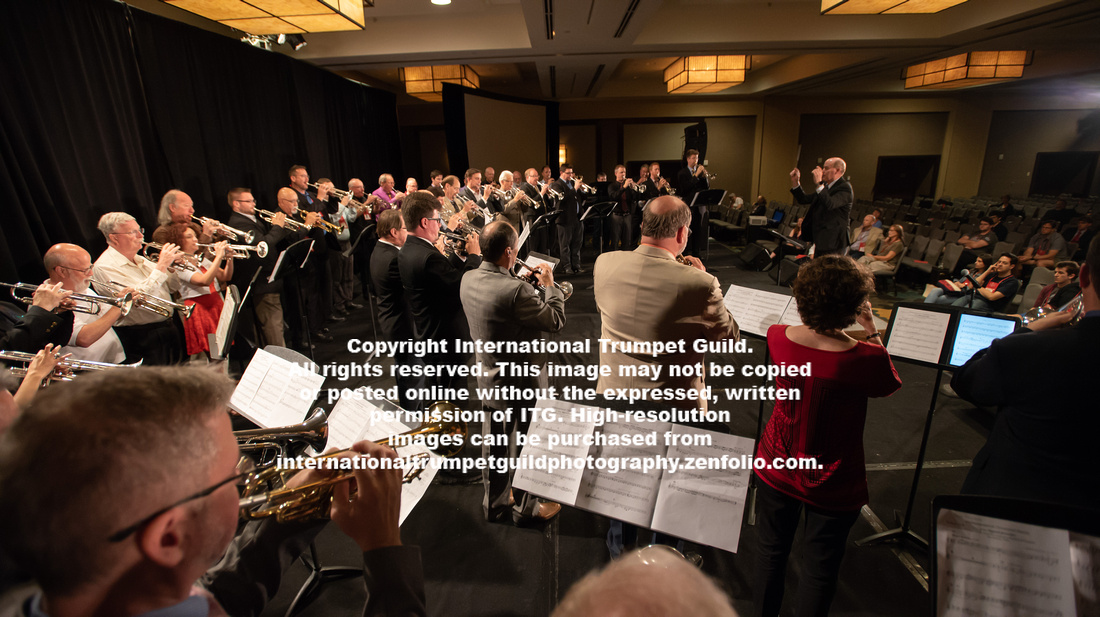