This opening evening of the 42nd annual ITG Conference was filled with the usual sense of excited anticipation of the wonderful trumpet-related events to come over the next four days and five nights. The Hershey Lodge is a warm, welcoming environment with chocolate-themed decor everywhere. As hundreds of people began arriving with both suitcases and gig bags in hand, there were plenty of smiles, handshakes, hugs, and laughs to go around with new friendships forged and old ones reaffirmed.

To kick off the 42nd annual ITG Conference, a trumpet ensemble of several hundred players of all ages performed Dennis L. Horton’s four-part arrangement of highlights from the second act of Verdi’s Aïda, under the baton of the legendary Doc Severinsen. Players stood all over the ballroom - in the rows of seats in the audience or around the room’s perimeter - with Doc conducting from the stage. Some attendees brought wire music stands, while others had sheet music propped on open cases, flat on tables, or in their left hand. The sounds of trumpeters warming up gave way to applause as Doc crossed the stage to the piano to strike a tuning note. Everyone stood as if on cue. Doc then approached the microphone and shouted, “Are you ready?” after which the room exploded into glorious sound. A couple of players stepped into the holes, and another handful screamed above the staff on the last note. It was what all mass ensembles are at their best: informal, joyful, and oh-so-loud! A good time was had by all. (MM) 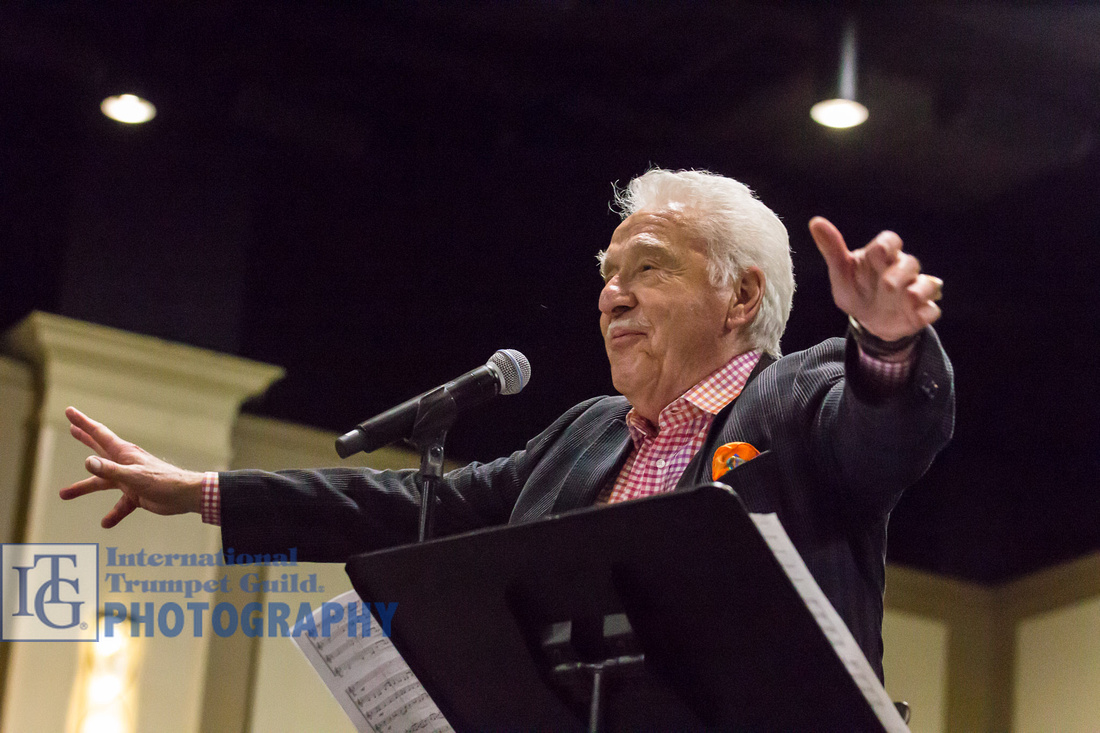 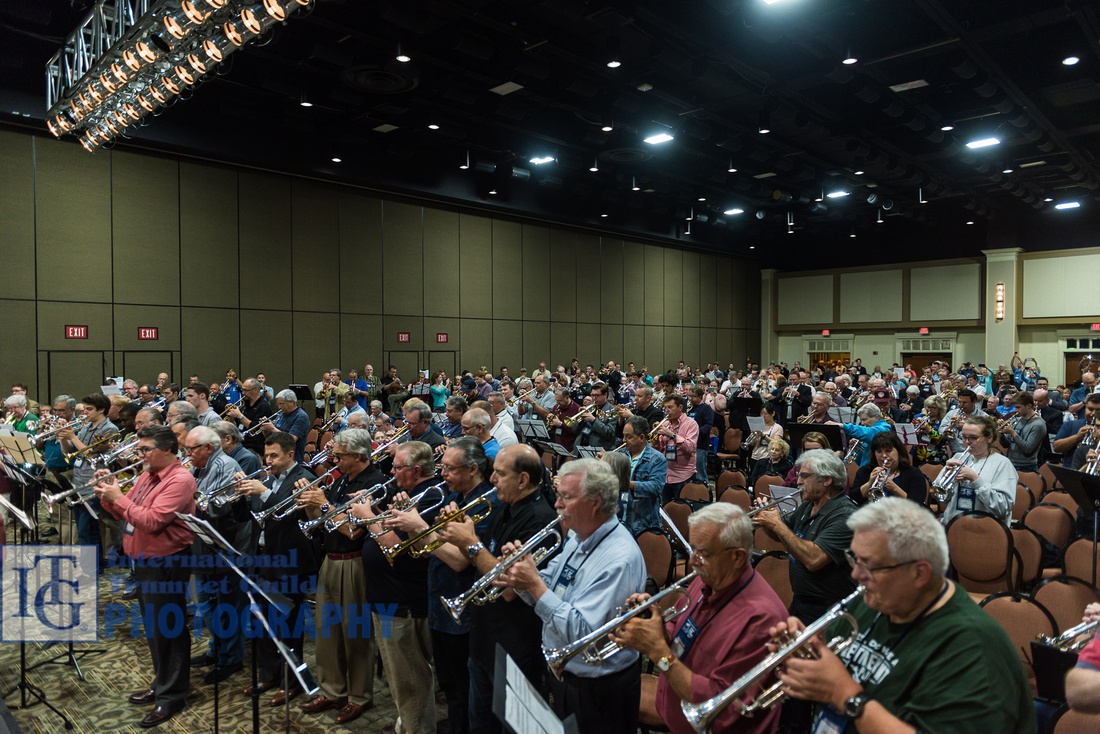 The Opening Gala Concert featured both new and familiar faces. Held in the Great American Red Hall of the Hershey Lodge, five trumpeters performed solos and ensemble works, accompanied by the Eastern Wind Ensemble. Immediately evident were the surprisingly good acoustics of the hall. The wind ensemble was well balanced and generally did not overpower the soloists, and the entire range of dynamics performed by the soloists could be heard easily.

Kevin Gebo and Matthew Harding were the evening’s first soloists. Gebo is currently a Staff Sergeant in the United States Army Band, and Harding is a former member of “The President’s Own” United States Marine Band. They performed Anthony Plog’s Double Concerto. This work is modeled after Antonio Vivaldi’s Concerto for Two Trumpets, utilizing a similar instrumentation for the accompanying ensemble. Plog even goes so far as to quote Vivaldi’s work toward the end of the piece. Gebo’s and Harding’s sounds matched perfectly, using C trumpets for the outer movements and switching to flugelhorns for the Lento movement, this reviewer’s favorite.

Ryan Anthony is the principal trumpet with the Dallas Symphony. Known for creating the Ryan Anthony Foundation and for hosting a series of all-star Cancer Blows concerts during his battle with multiple myeloma, Anthony performed Peter Meechan’s Renaissance of Wonder. Anthony explained that the work is based on five inspirational quotations that he read throughout his battle with cancer. Anthony said that the piece is about hope, and his lush sound, especially in the lyrical sections of the piece, resulted in the first standing ovation of the conference.

Robert Sullivan, professor of trumpet at Northwestern University, is a familiar face to regular attendees at ITG conferences. He performed Joseph Turrin’s The Sounding of the Call. In three sections, the opening march-like theme gives way to a beautiful, at times urgent, slower middle section, before returning. Sullivan’s clarity and focus of sound were striking.

Anthony, Sullivan and Gebo returned to the stage to perform Peter Meechan’s Song of Hope. Originally the second movement of Meechan’s cornet concerto, Anthony asked Meecham to rewrite it as a stand-alone work. The result is a breathtaking work that was performed brilliantly by all three soloists.

Currently the principal trumpet of the Royal Philharmonic Orchestra in London, James Fountain performed Blaze, by British composer Philip W. Lawrence. With a bit of a “Latin” feel, the piece is reminiscent of works by Allen Vizzutti, featuring angular lines that require great agility by the soloist. While it was, at times, difficult to hear the soloist over the ensemble, Fountain’s remarkable virtuosity was clearly evident throughout.

The concert ended with two works for multiple trumpets - Anthony DiLorenzo’s Trumpets on Parade, featuring Ryan Anthony, James Fountain and Matthew Harding, and Anthony Naulais’ Le Vent des Hélices (The Wind of the Propellers), featuring all five soloists. Trumpets on Parade was a fun Bugler’s Holiday type of piece, even quoting this work near the end. Equally playful, Le Vent des Hélices again highlighted the impressive acoustics of the hall, with the audience able to hear the soloists above the ensemble, even when three of them used harmon mutes.

The audience left thrilled. What an exciting and inspiring start to the conference! (KE) 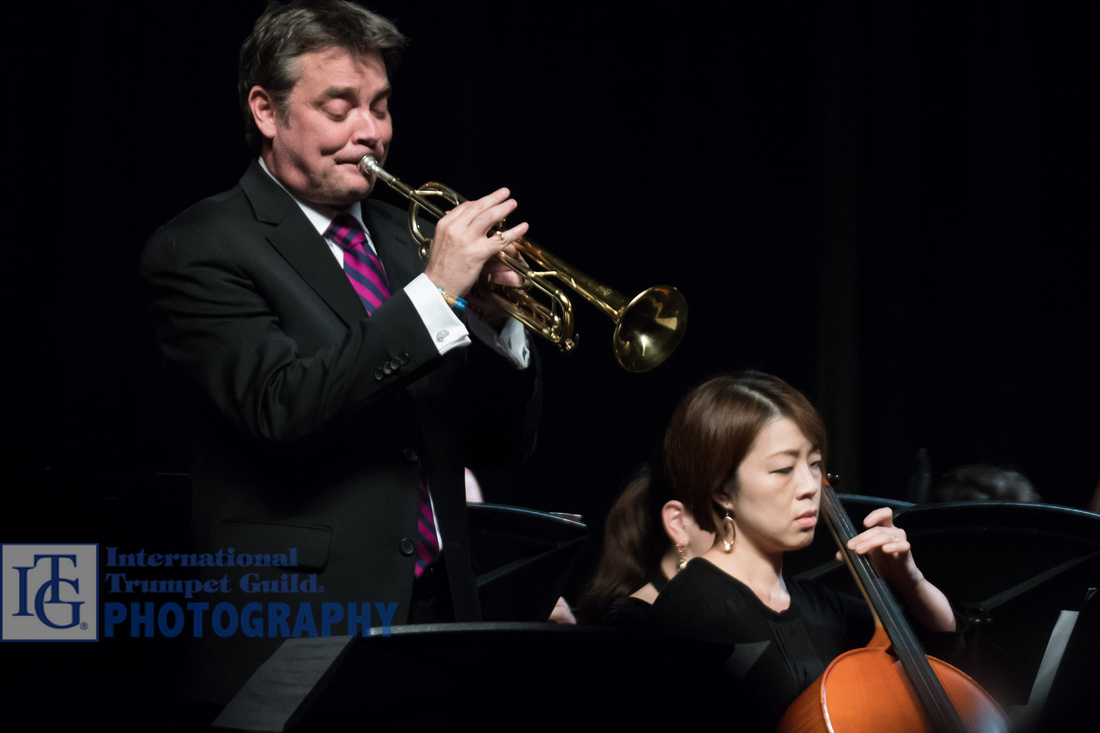 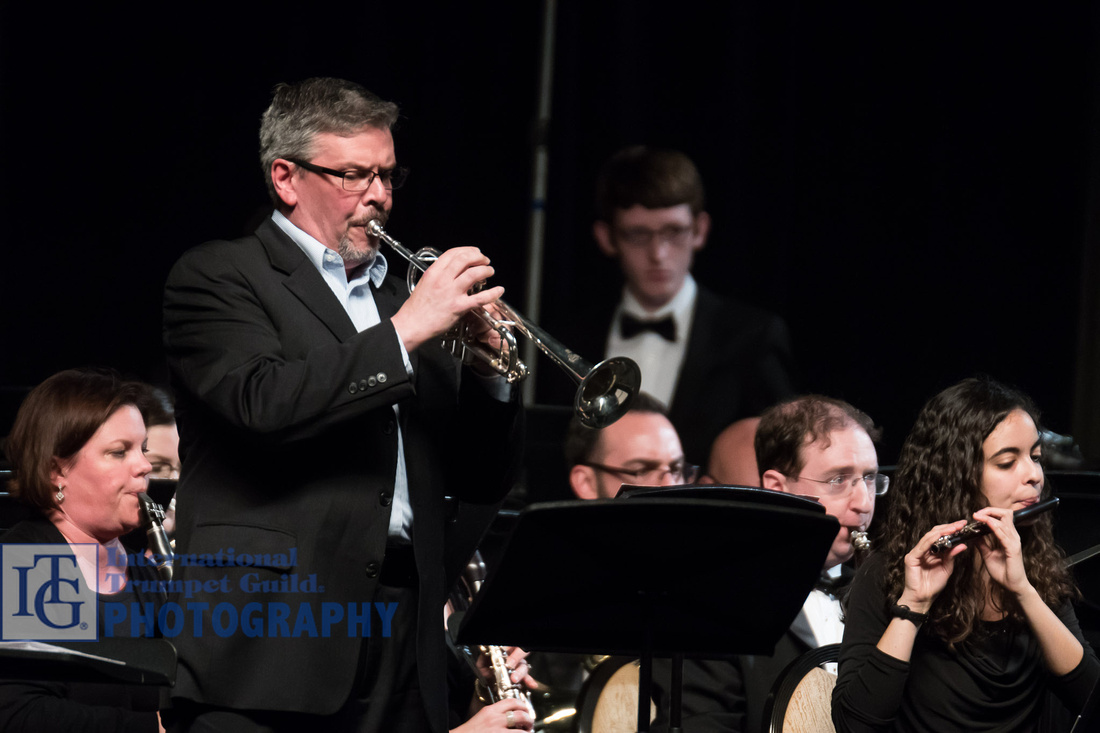 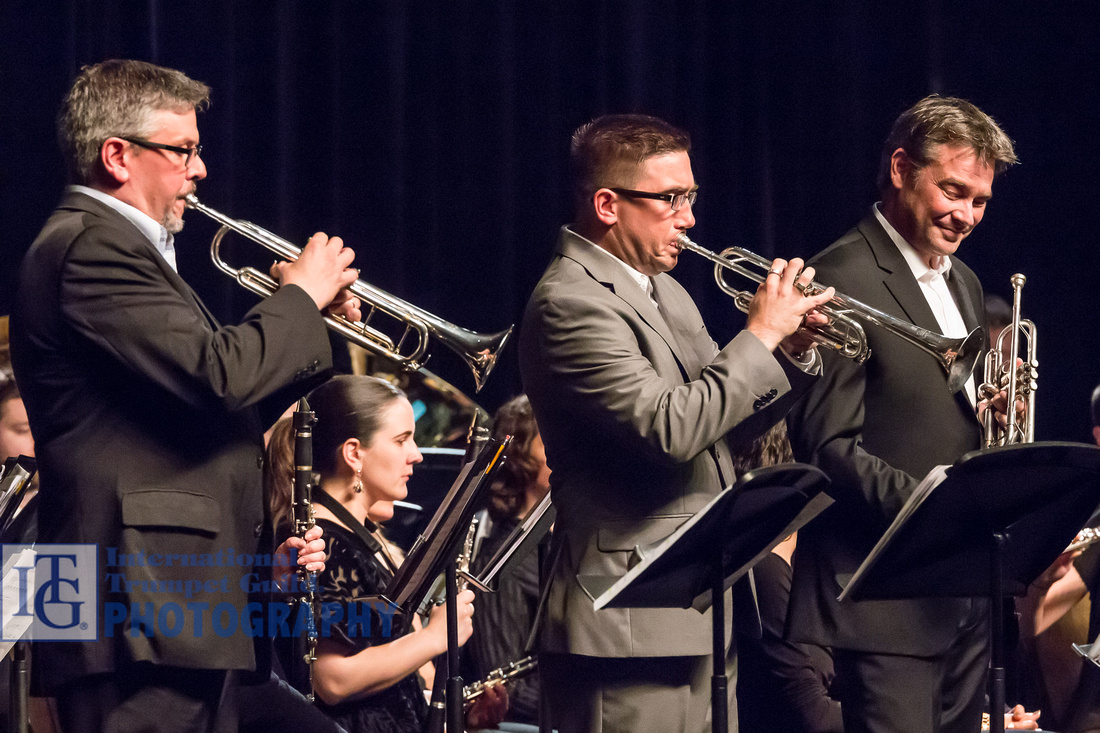 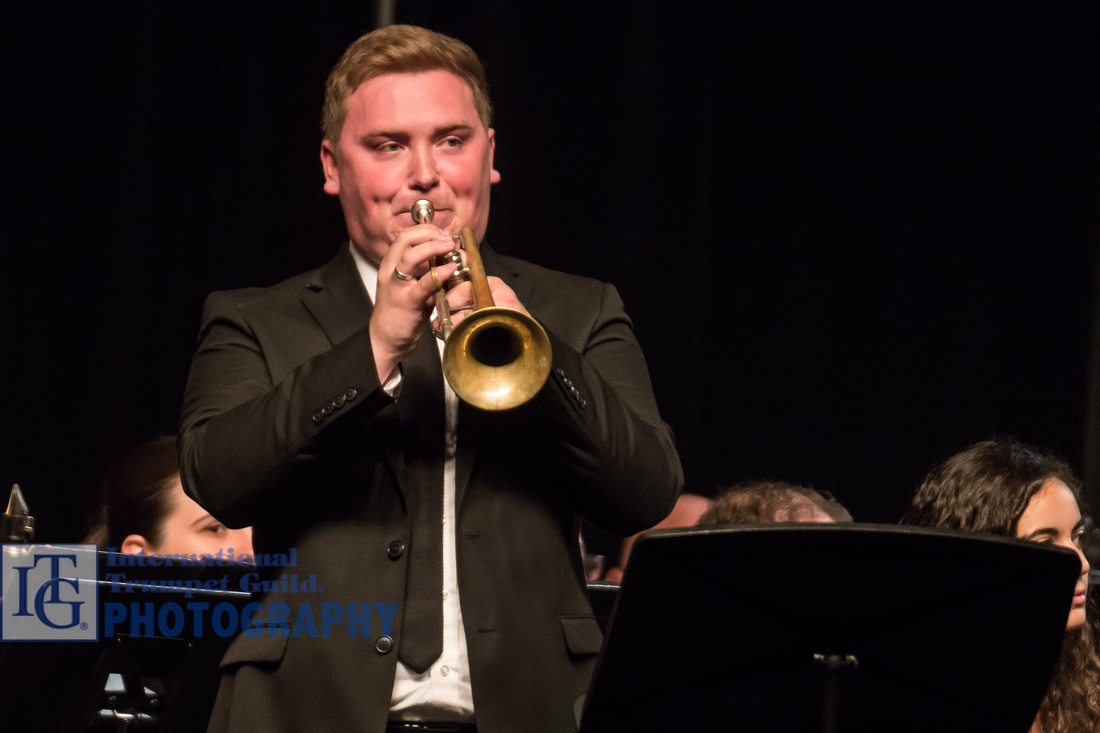