A capacity crowd packed the Trinity Episcopal Cathedral for a brilliant recital by trumpeters Barbara Butler (Rice University) and Chris Martin (New York Philharmonic), along with organist Bryan Anderson. The program opened with a sparkling rendition of the Vivaldi Concerto for Two Trumpets in C, featuring Butler playing the first part with elegant ornamentation. Chris Martin performed Klemens Schnorr’s arrangement of J.S. Bach’s Concerto in D, BWV 972 (after Vivaldi). Martin’s silky-smooth cantabile in the central Larghetto was a notable highlight. Butler performed Petr Eben’s Okna (Windows). Her commanding tone and sensitive interpretation were matched by Anderson’s virtuosity on the organ. Martin then joined his former teacher in transcriptions by Barbara Harbach of two vocal duets from Bach cantatas. In Carson Cooman’s Solstice Sonata, Chris Martin’s gorgeous sound held the audience spellbound. Both trumpeters took the stage together again for the final selection, two movements from James Stephenson’s Awakenings, This exciting piece was a perfect close to the wonderful recital, sending the audience forth in high spirits. (EK)

Check out this video from the concert! 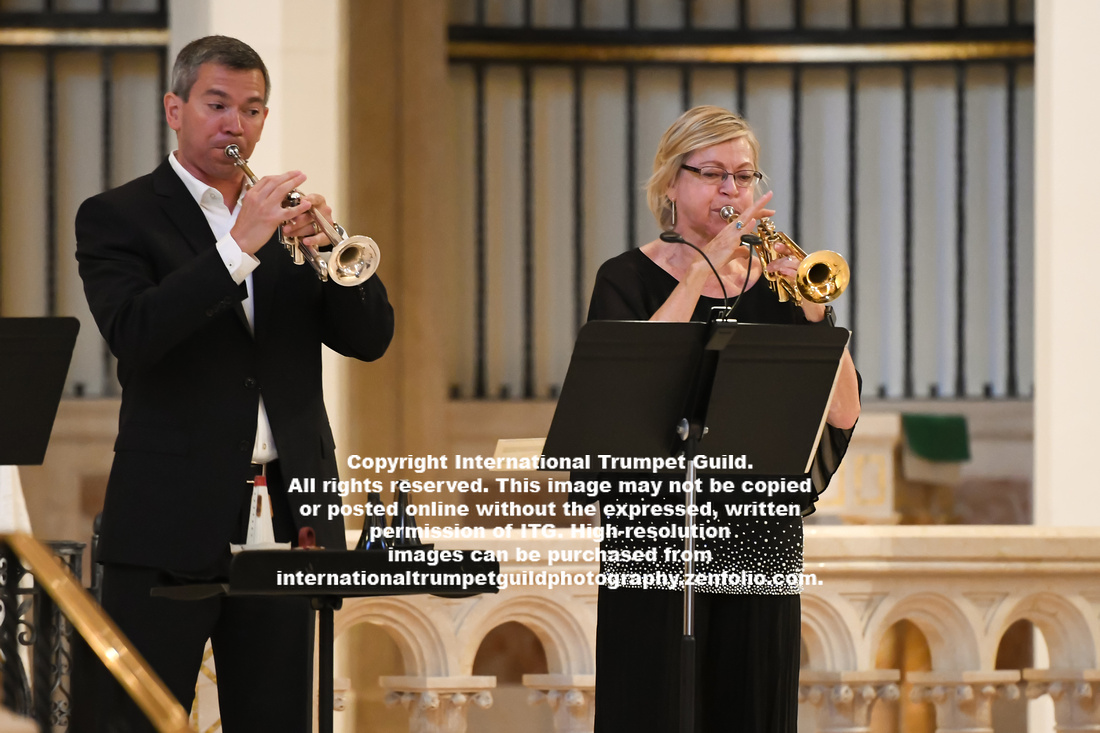 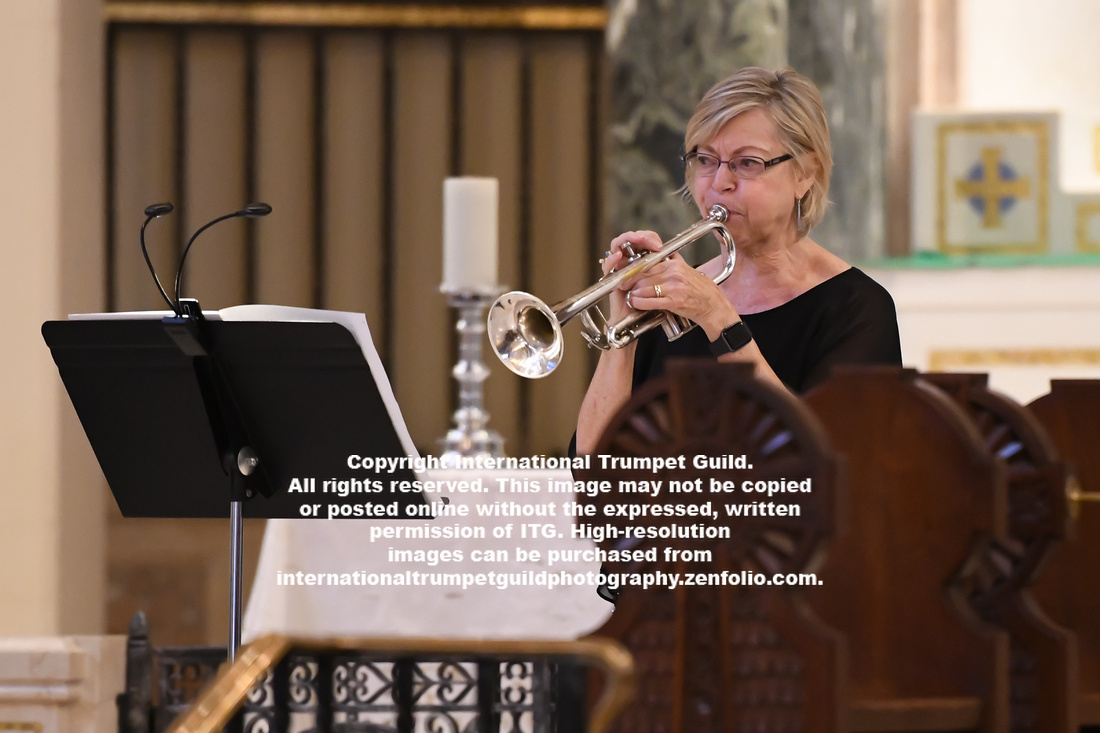 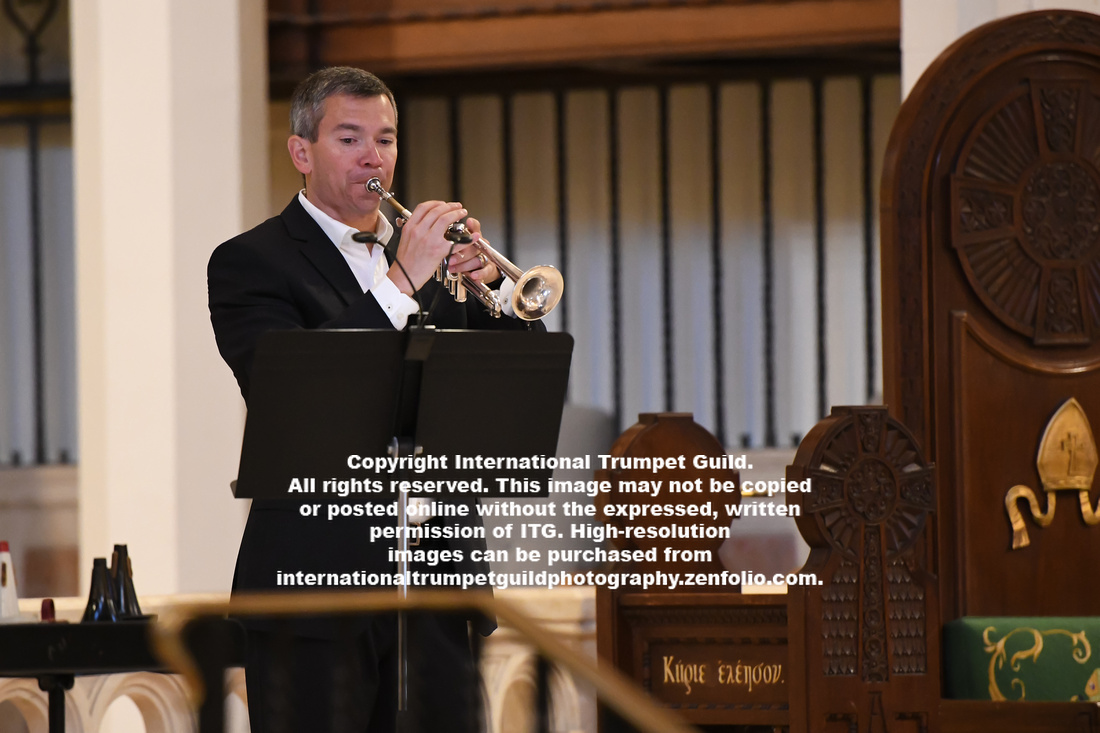 Frank Brodahl (Norway) has been accumulating the music of Chase, in some cases creating arrangements from live concert recordings, since 2015. He, along with Ingolf Burkhardt (Germany), Jacek Onuszkiewicz (Poland), Patrick Skogh (Sweden), and the always electrifying Andrea Tofanelli (Italy), brought the music of Chase back to life. Jim Szantor of DownBeat magazine once described this music as “complex cascading lines; a literal waterfall of trumpet timbre and technique.” (https://en.wikipedia.org/wiki/Bill_Chase) The rhythm section was strong, but especially noteworthy was pianist Tal Cohen, whose solos were almost as exciting as Tofa’s high notes!

The performance began with Open Up Wide, featuring the artistry of Andrea Tofanelli. Familiar works included Invitation to a River, Two Minds, Bochawa, Boys and Girls Together, Weird Song, and MacArthur Park. They also performed less familiar works from the Chase repertoire, such as Gary Fry’s arrangement of Tubular Bells. While “Bill Chase” and “ballads” rarely appear in the same sentence, Chase did perform some works at slower tempos. Ingolf Burkhardt played a beautiful flugelhorn solo in the ballad Twinkles, and Ode to a Jellyfish featured Patrick Skogh, also on flugelhorn.

Breaking from the theme of the concert, the quintet performed “The Star Spangled Banner” as arranged by Frank Brodahl as a tribute to the ITG Conference and the United States before concluding the concert with their rendition of Get It On, bringing the audience back to their feet. The friendship and camaraderie among the five were obvious, especially between Brodahl and Tofanelli, who kept calling Brodahl “a big Viking.”

Bill Chase played lead trumpet with the Maynard Ferguson, Stan Kenton, and Woody Herman bands before forming “Chase,” a jazz rock band that mixed pop, rock, blues, and four trumpets, in 1971. Chase was killed tragically in a plane crash in August 1974 at the age of 39, but he has had a lasting impact on trumpet playing. Thanks to the sponsorship of the Yamaha Corporation, the music of Chase was reborn for this evening’s standout concert. (KE) 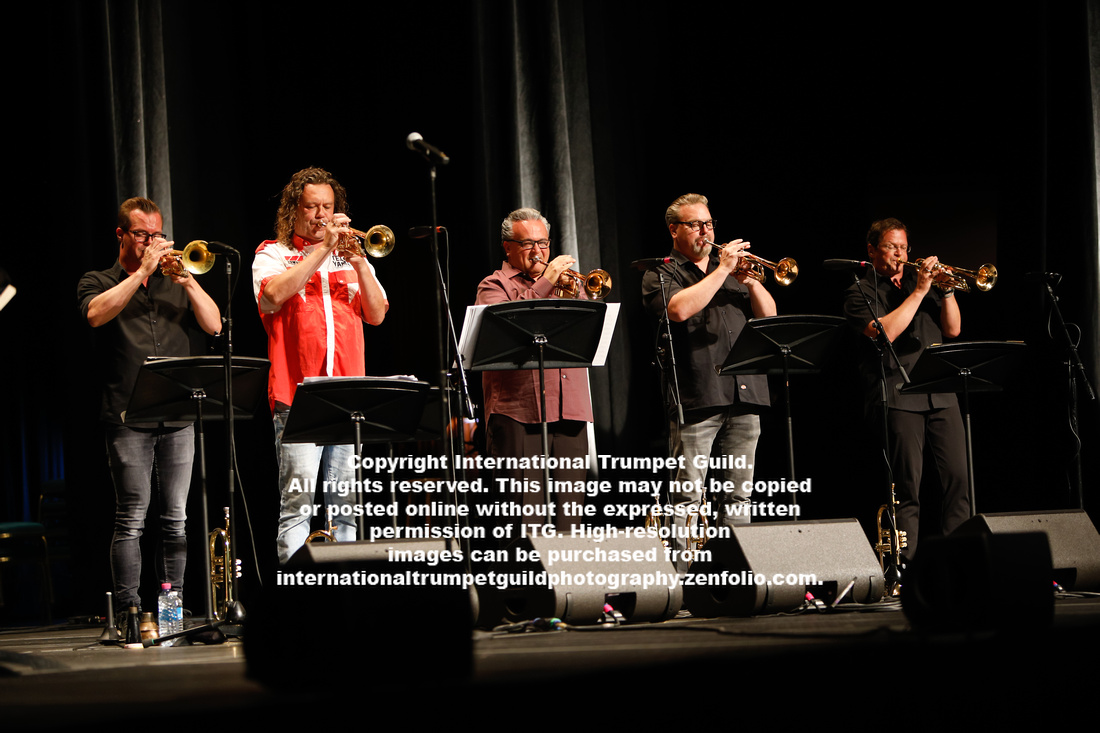 The Non-Pro/Comeback Players Reception has become an annual event at ITG Conferences. This is an important constituency within the International Trumpet Guild, and ITG President Cathy Leach thanked the group for their continued involvement in the organization. Dan Hallock, chair of the Non-Pro/Comeback Players Committee, reminded those at the reception about events yet to be held during this week’s conference, including warm-up sessions, masterclasses, and the Festival of Trumpets concert. He explained to first-time Conference attendees that they are “part of the ITG family” and are valued members. Numerous ITG board members and several past presidents answered questions and discussed ideas for future events with the group. Thanks to Thompson Music and Stomvi Trumpets (K.O. Skinsnes) for sponsoring this reception. (KE)