This opening evening of the 44th annual ITG Conference was filled with the usual sense of eager anticipation of the wonderful trumpet-related events to come over the next four days and five nights. The Hyatt Regency in downtown Miami is a warm, welcoming hotel with great ethnic restaurants all around. As participants poured in throughout the afternoon, there were plenty of smiles, handshakes, hugs, and laughs to go around. After the fanfare with Jens Lindemann and the opening concert featuring Ingrid Jensen and Alphonso Horne, the socializing continued with an exhibitors welcome reception and a trumpet ensemble reading session led by Buddy Deshler. Expectations are high for a another memorable conference!

With the Opening Fanfare torch having been officially passed from the inimitable Doc Severinsen to the incomparable Jens Lindemann, the International Trumpet Guild’s 2019 Conference opened with a near 200-member trumpet ensemble performing Malcolm Arnold’s A Hoffnung Fanfare, as transcribed by James Olcott. In typical Jens-ian fashion, the maestro brought an indelible sense of fun and excitement to the event, entertaining both the players and the audience in attendance. Doc delivered a touching meditative tribute to Ryan Anthony as an introduction to the emotionally rendered closing piece, David Haskins’ arrangement of Peter Meechan’s Song of Hope, featuring soloists Nancy Taylor, Jose Sibaja, and Jens himself. In the words of Doc Severinsen, “A man without hope is through.” (TT) 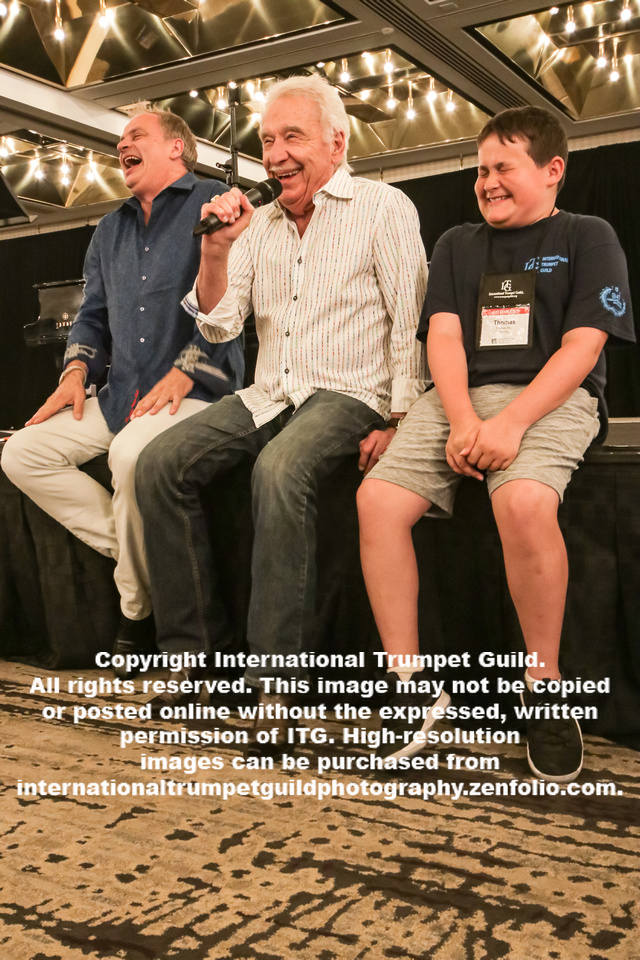 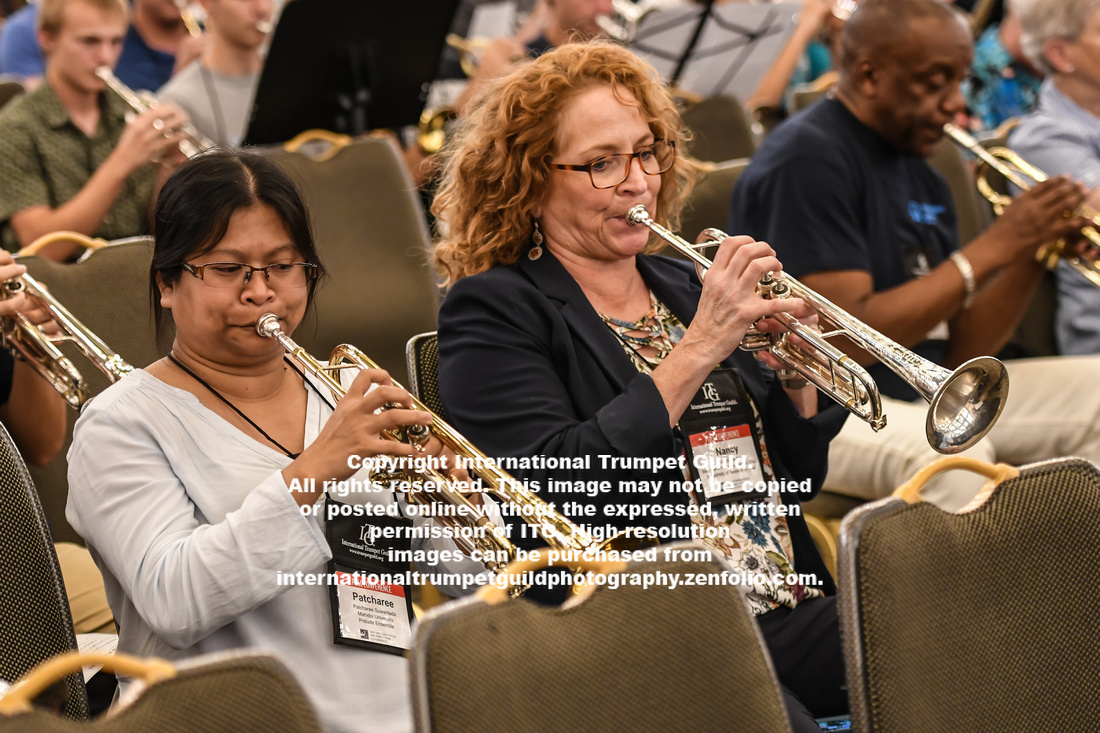 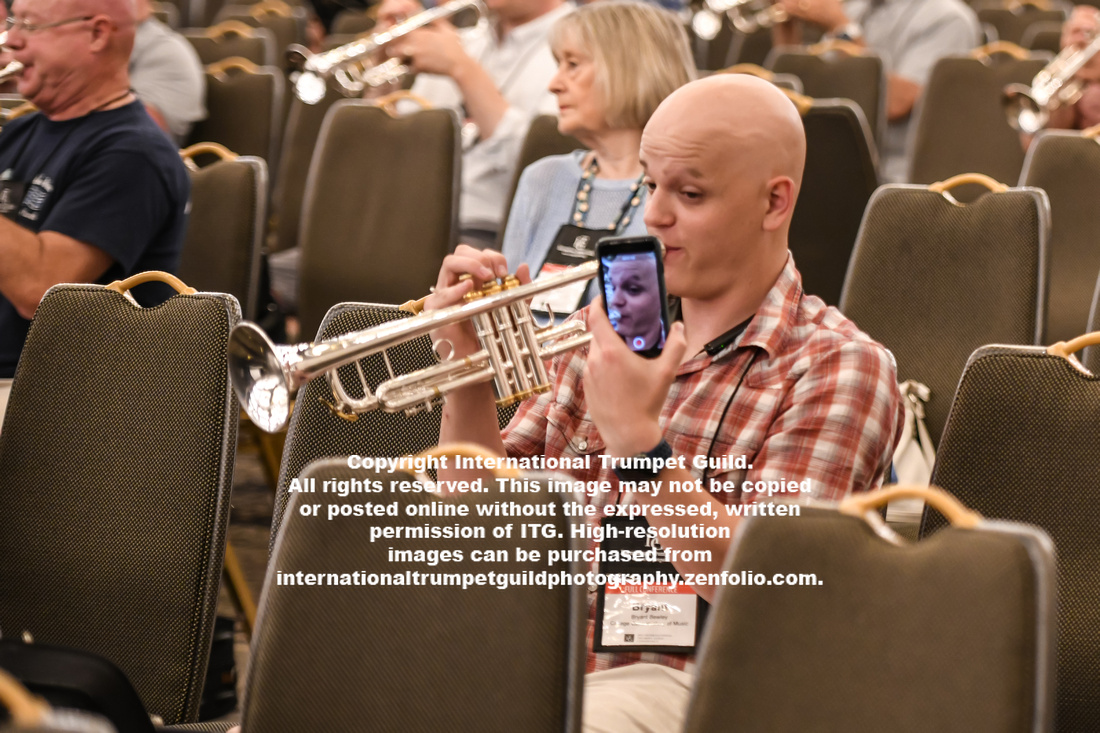 There is an energy and excitement that is part of every opening concert at an ITG Conference. This opening concert, featuring Ingrid Jensen, Alphonso Horne, and the Ryan Chapman Orchestra, was no exception. The somewhat small opening-night crowd fit easily into the James L. Knight Convention Center, an attractive space better suited for concerts than venues usually found in conference hotels.

The Ryan Chapman Jazz Orchestra, a newly formed seventeen-piece group, opened the event with Casting Shade, an original work by Chapman, who is a freelance trumpet player and educator living in Miami. The RCJO played with tight ensemble, an unforced quality, and a nicely balanced sound.

The applause had not ended for the first piece when both Ingrid Jensen and Alphonso Horne entered the stage, trading improvisational licks in a sort of conversation as they strolled from opposite wings to the front of the stage. What followed was the hippest version of Ferde Grofé’s On the Trail that this reviewer has ever heard. Who knew that Grofé could swing? “Laid back” was the theme for the night. This concert did not have the “can you top this?” vibe often associated with these types of performances. Great solos were played by both Jensen and Horne, with interesting interaction between each of them and the rhythm section.

Wasting no time, Jensen immediately led the band in an up-tempo arrangement of Serenade to a Bus Seat, written by Clark Terry and arranged by David Berger. Jensen has a smooth, easy approach to the trumpet, much like her mentors, including Terry.

Alphonso Horne returned to the stage to perform Portrait of Louis Armstrong and The Shepherd, both composed by Duke Ellington. In Portrait of Louis Armstrong, Horne began with an impressive imitation of Armstrong’s sound and technique and then, in an amazing tonal transition, morphed to his own sound and style. The Shepherd, one of Ellington’s sacred works, featured Horne’s remarkable ability with the plunger.

Jensen’s set included Kenny Wheeler’s Gentle Piece, which was, in fact, a very gentle and beautiful ballad. She moved directly into Song for Inga, a jazz waltz written by her sister, Christine.

Horne rejoined Jensen on stage for the final work of the night, Wink, also written by Christine Jensen and dedicated to Laurie Frink. Described by Ingrid as “sassy,” the piece opened up at the end, allowing each member of the RCJO to take a short solo before Jensen and Horne brought the piece to a rousing close. This was a satisfying opening concert--a superb pairing of two talented trumpeters with an exciting big band. (KE) 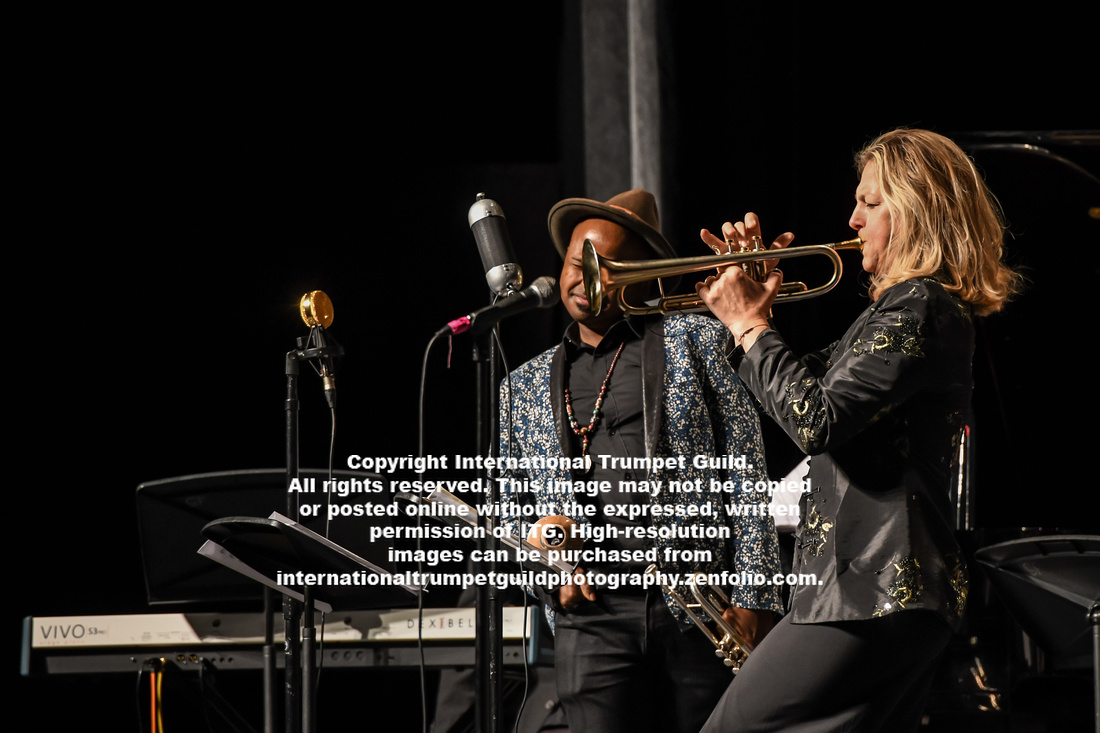 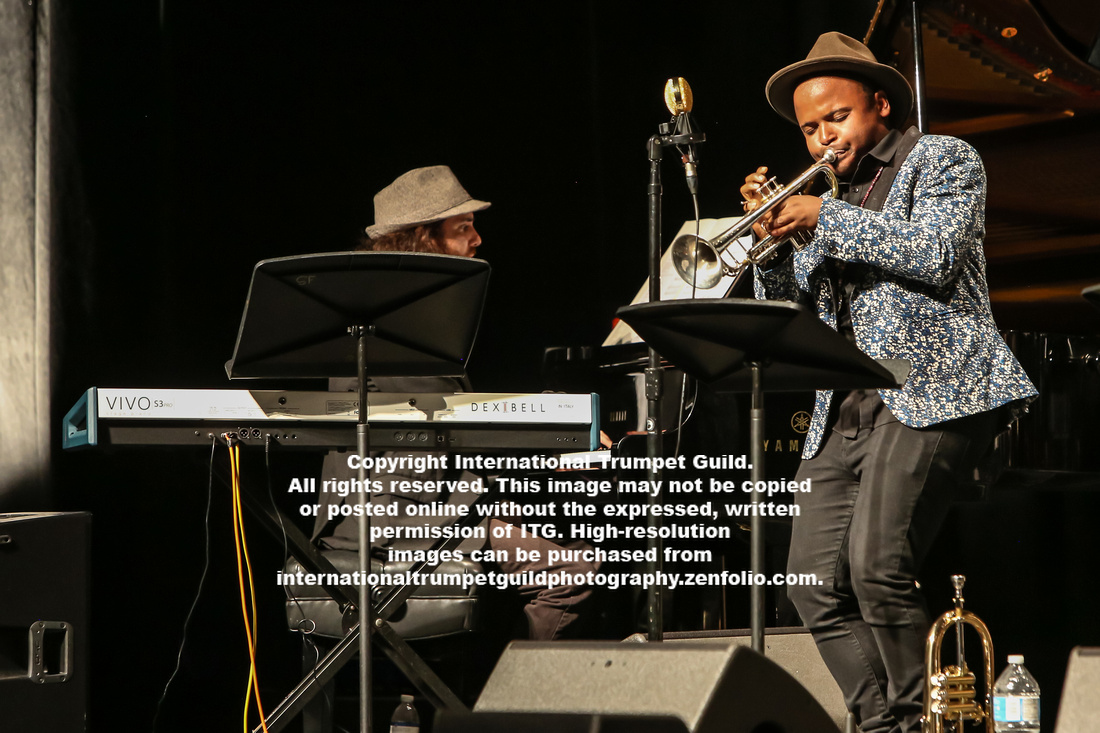 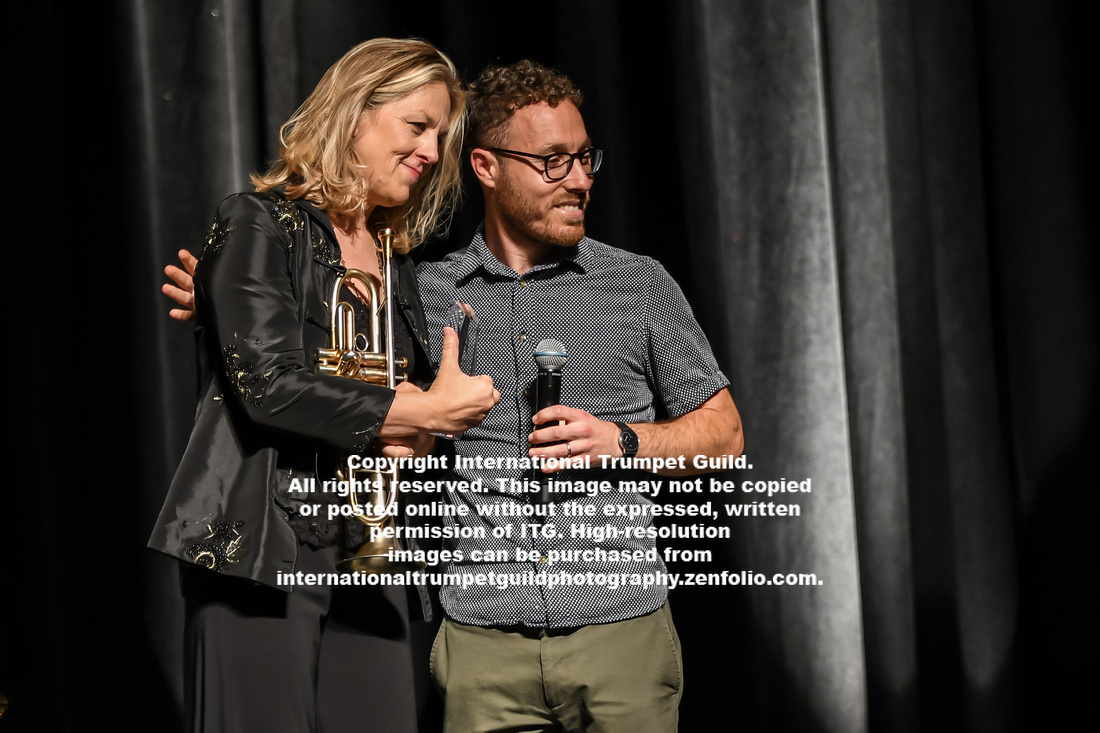 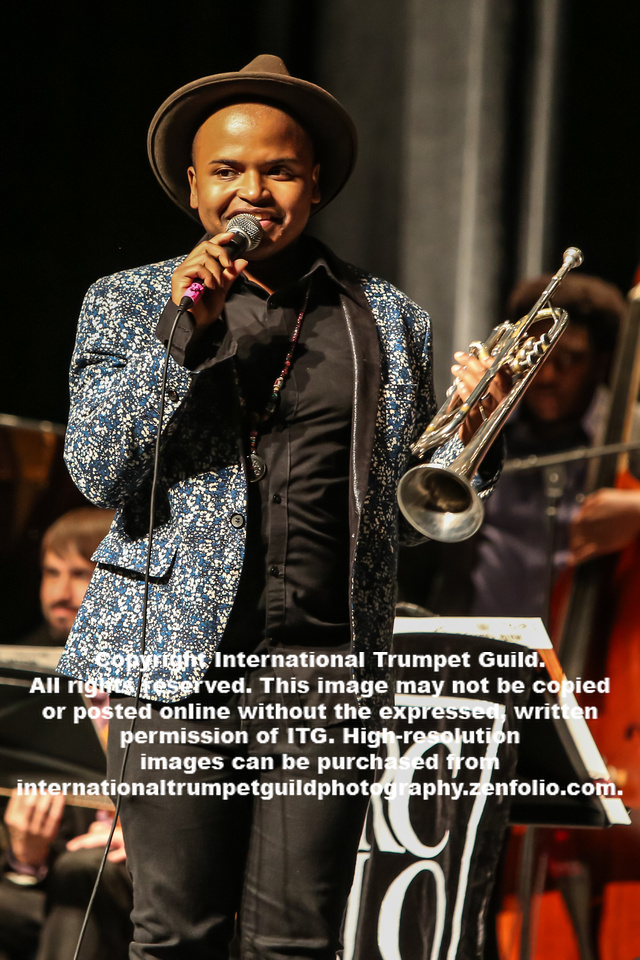 Trumpet ensemble reading sessions are a new, innovative part of the ITG Conference experience. These unique rehearsals are open to the public and are a wonderful opportunity for players of all abilities to learn and network together. Over forty participants of all ages attended the first reading session led by Buddy Deshler and Jim Olcott. The fast-paced rehearsal began with an arrangement of Canzona noni toni a 12 by Giovanni Gabrieli. The next piece was Lembrancas do Brasil (Memories of Brazil), an original work for five flugelhorns by Daniel Thrower. The final piece of the session was Go Forth to Serve by Daniel Thrower, a complex extended fanfare for twelve trumpets. The compositions featured in this reading session can be found on both Triplo Press and Gilded Music Press. (MY)