This opening evening of the 43rd annual ITG Conference was filled with the usual sense of eager anticipation of the wonderful trumpet-related events to come over the next four days and five nights. The Hyatt Regency Riverwalk is a warm, welcoming hotel with great restaurants everywhere in a lively downtown environment. As participants poured in from all over the world throughout the afternoon, there were plenty of smiles, handshakes, hugs, and laughs to go around. After the fanfare with Doc Severinsen and the opening CancerBlows concert, the socializing continued with a welcome reception at which a festive local mariachi band serenaded attendees. Expectations are extremely high that this will be a conference to remember!

The 2018 ITG Conference began with a collective cacophony of trumpet sounds, as hundreds of conference attendees filled the Rio Grande Ballroom to be a part of Doc Severinsen’s Mass Trumpet Ensemble. With the abundantly able help of Doc Severinsen and James Olcott, participants rehearsed Excerpts from Aida (Act II) by Verdi (arranged by Dennis L. Horton) and Trumpets Take Texas, a medley of Texas-themed tunes by James Olcott. After a brief but sufficient rehearsal for each work, the “ensemble” assembled across the street, directly in front of the famous Alamo. The Texas sun could not squash the genuine spirit of collegiality and good humor as participants of every background prepared to perform under Doc’s direction. Despite its storied history, the Alamo has never experienced the sound of Doc and several hundred trumpets playing simultaneously, and the experience will bring new meaning to “Remember the Alamo” for all the participants. (BH) 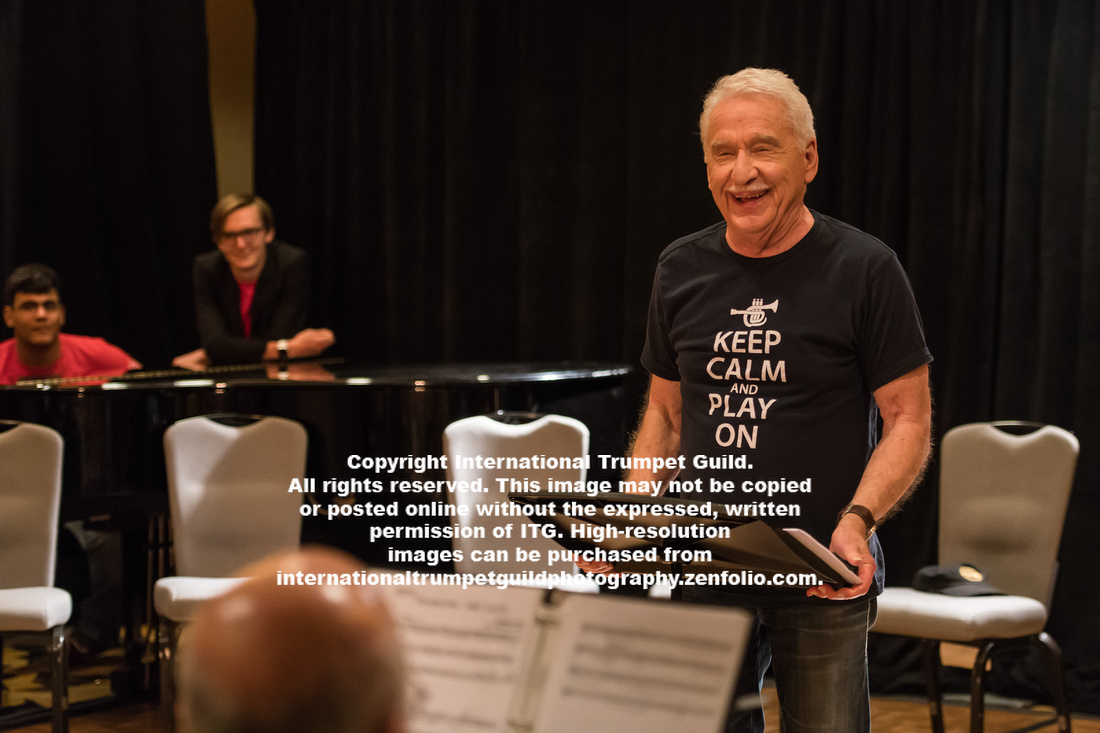 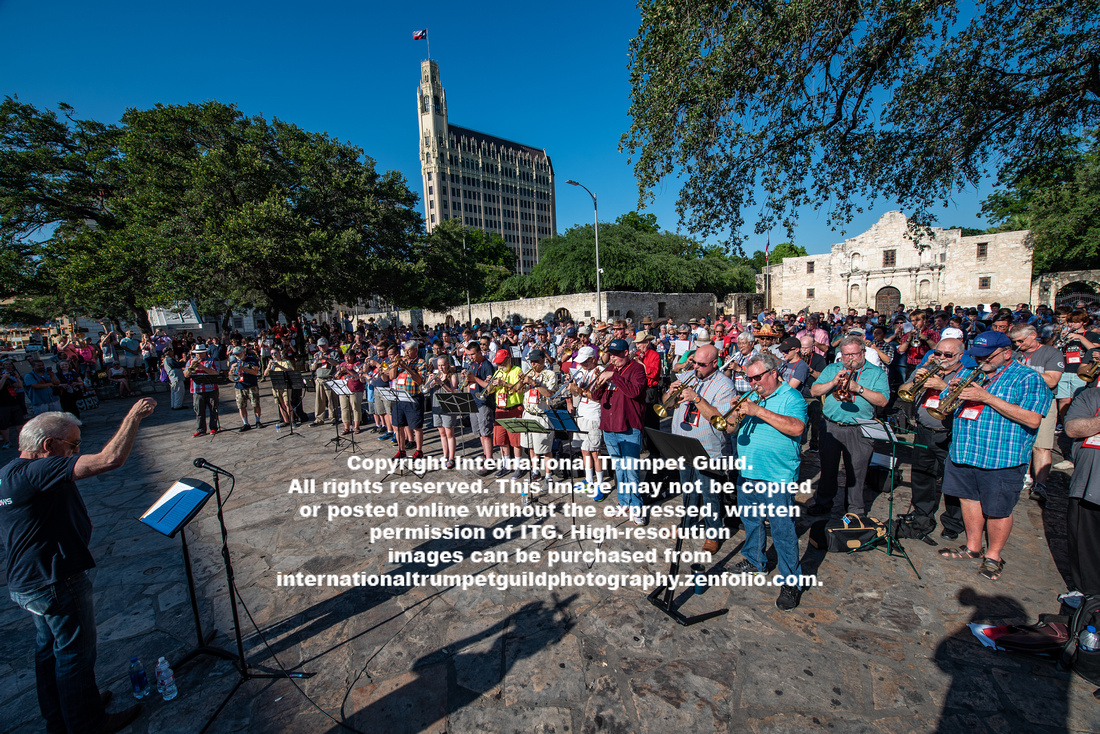 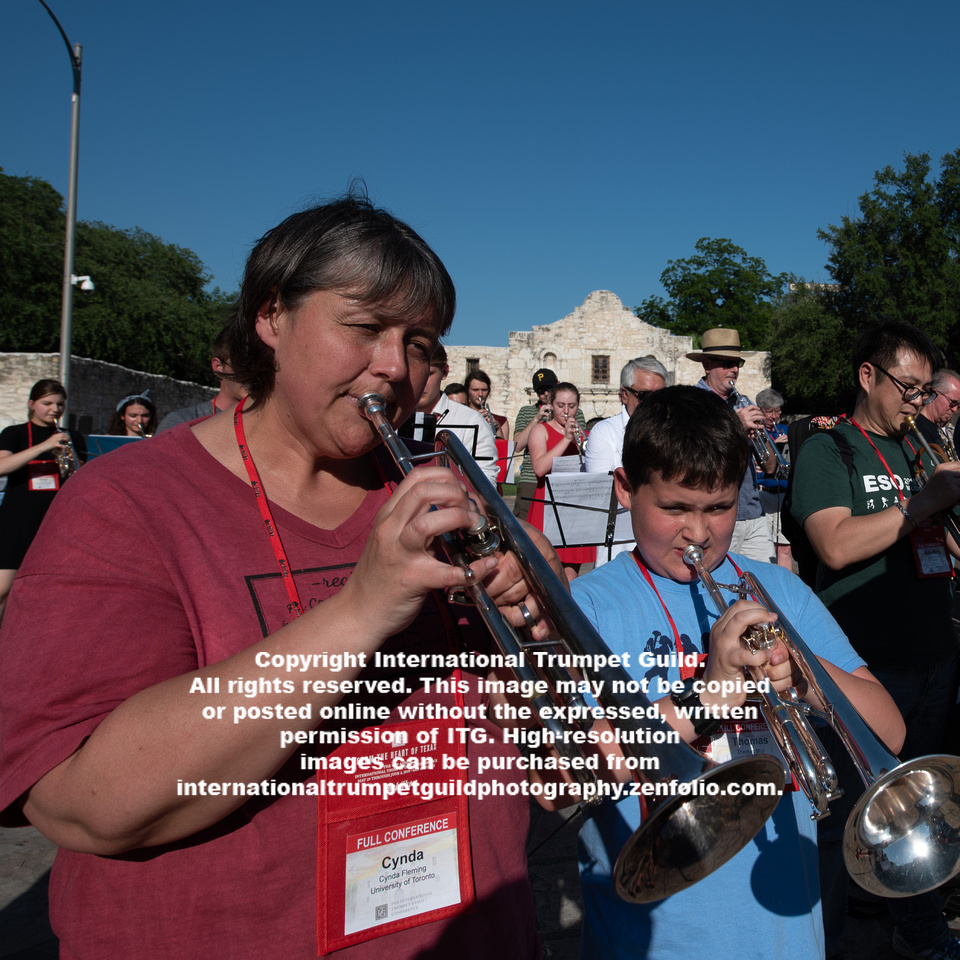 The first concert at any ITG conference is always a special event, but this particular one showcased far more than great trumpet playing. It was a celebration of life, the trumpet community, and the triumph of the human spirit. Ryan Anthony, principal trumpet of the Dallas Symphony and former member of the Canadian Brass, was diagnosed with a rare form of cancer in 2012 and later created a foundation and a series of benefit concerts called “CancerBlows,” which feature prominent trumpet soloists to raise funds for cancer research.

The first piece, Peter Meechan’s Remission, began in a darkened hall with a spotlight shining on a lone trumpet at the front of the stage. Trumpeters positioned around the perimeter of the auditorium took turns playing poignant melodies until the lights came up and the brass and percussion sections of the band were joined by Hickman, Sibaja, and Smith on stage. The music alternated between majestic hymnody and a harmonized version of Taps. An all-star trumpet ensemble of thirteen soloists were next, performing Burt Truax’s Legacies of Honor, under the direction of Marie Speziale. Raymond Burkhart’s Half Dome Fanfare (World Premiere) dazzled the audience with virtuoso acrobatics and sweeping melodic gestures. 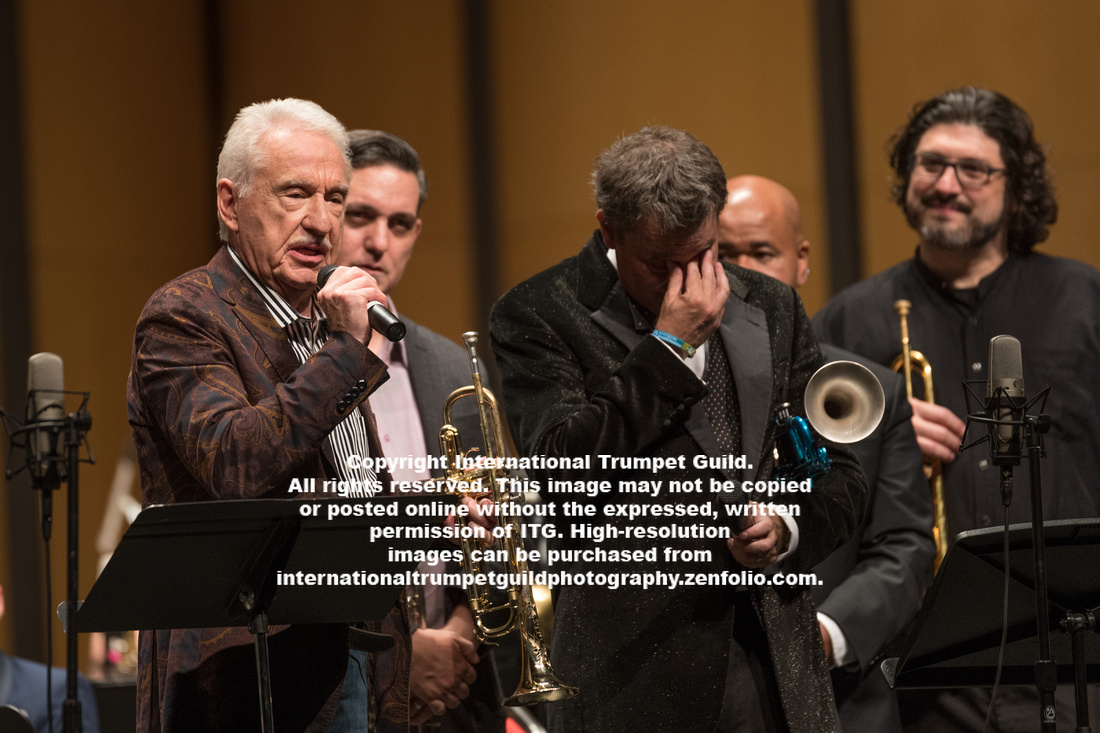 ITG President Cathy Leach then introduced Ryan Anthony, who in turn introduced Doc Severinsen, thanking him for his friendship and support of the Cancer Blows project. With his trademark wit, Doc explained how his father used to play Fritz Kreisler’s Caprice Viennois on the violin to help Doc fall asleep when he was a child. Hickman, Vax, Romm, and Smith joined Doc on stage for Anthony DiLorenzo’s beautiful arrangement of the piece, after which Doc laid down on the stage, briefly, to remind the audience of his relationship with the tune as a lullaby. 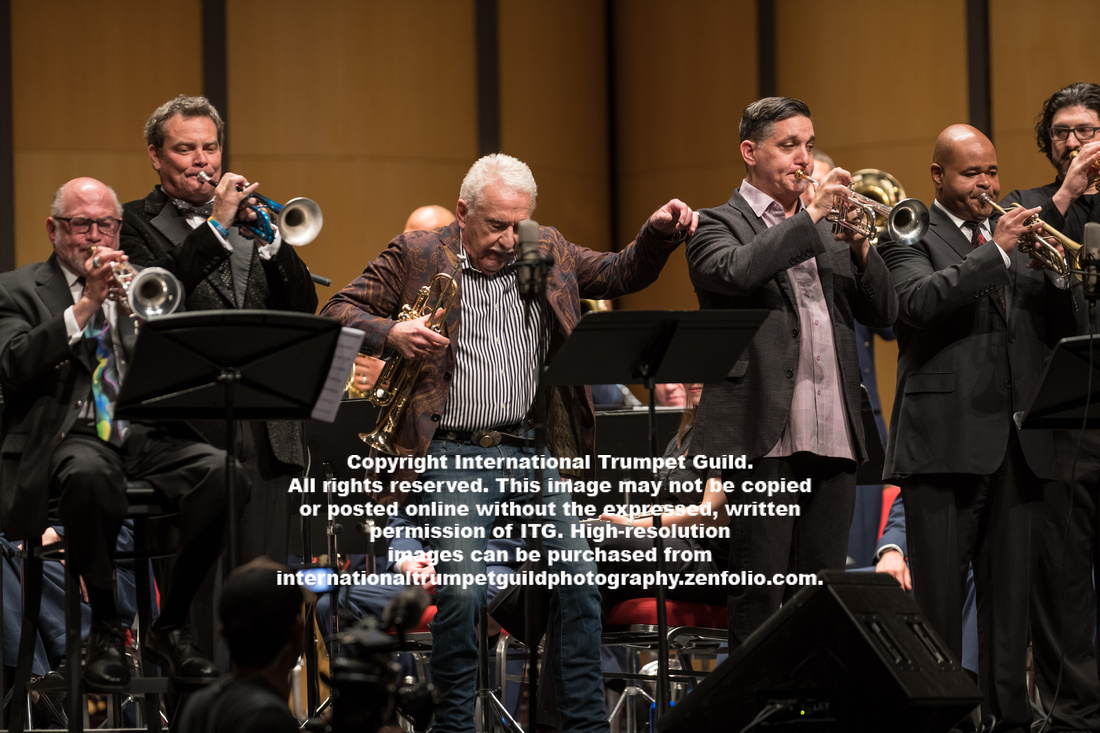 Rex Richardson and Joe Burgstaller performed the “High Noon” movement from Kevin McKee’s Under Western Skies, after which Ryan Anthony returned to perform Gabriel’s Oboe from Ennio Morricone’s film score for The Mission. Performing on piccolo trumpet from memory, Anthony’s effortless and soulful interpretation transported the audience to another realm. Jens Lindemann and Richard Kelley then joined Anthony for Peter Meecham’s Song of Hope, which was followed by Kelley’s fine performance of "What a Wonderful World," which showed off his beautiful singing voice, in addition to his trumpet playing. 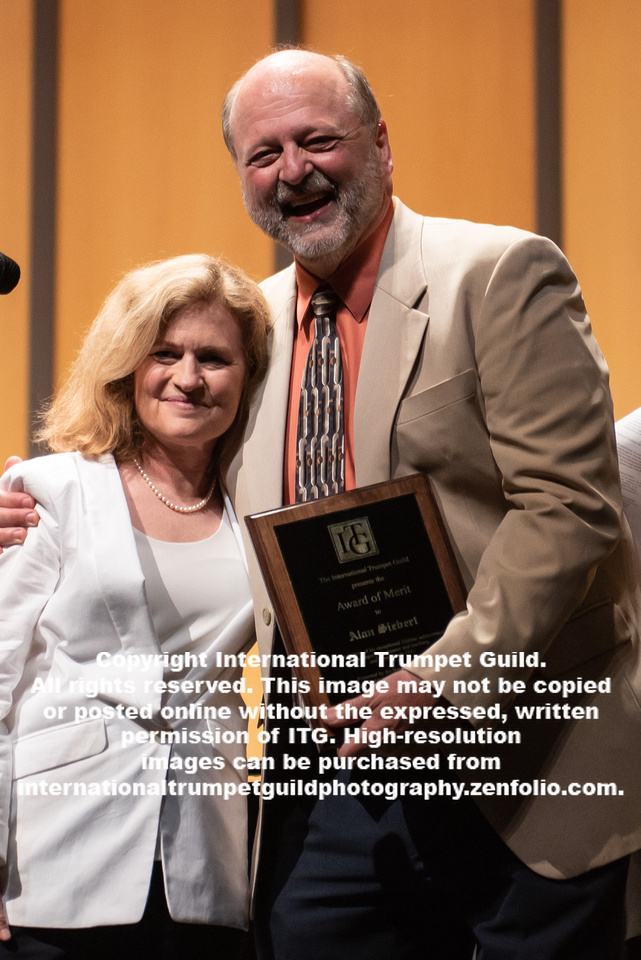 Cathy Leach returned to the stage to present the ITG Award of Merit to Alan Siebert, after which the Méndez trio, The Brave Matador, was performed by Hickman, Romm, and Vax. An arrangement of Ginastera’s “Danza Finale” from Estancia followed, after which four trumpeters who had all previously played with the Canadian Brass – Anthony, Romm, Lindemann, and Burgstaller - performed a rousing rendition of A New Carnival of Venice by Thomas Stevens. Tromba Mundi was next, performing Victory Fanfare by Ben Blasko, another cancer survivor. Finally, all of the evening’s soloists, along with the trumpet section of the Air Force Band of the West, lined the front of the stage for a spirited performance of Count Basie’s One O’Clock Jump, which brought this inspiring opening concert to a joyous, festive close. (EK) 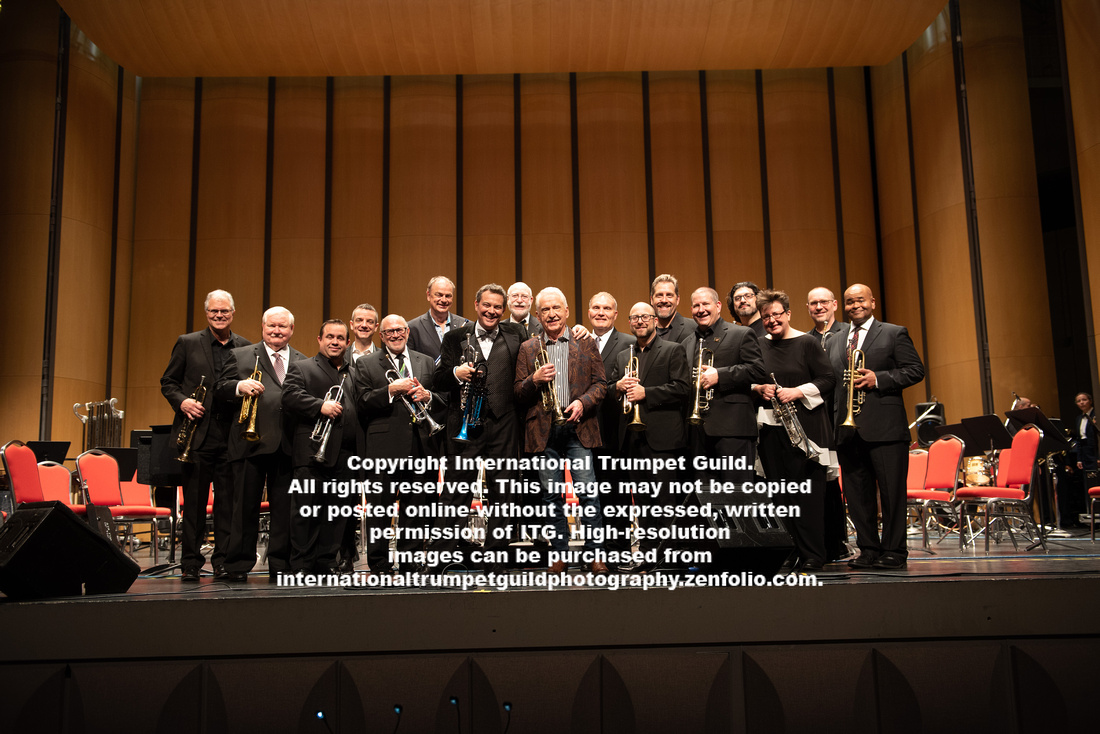