Exultation by Richard Byrd
The Legend of Pandora by Jason Dovel

The Angelo State University trumpet ensemble, under the direction of Dr. John Irish, certainly did not disappoint. The works performed made excellent use of standard trumpet ensemble writing techniques while also remaining unique and entertaining. This was a captivating performance by the ASU trumpet ensemble. (Nathan Shadix) 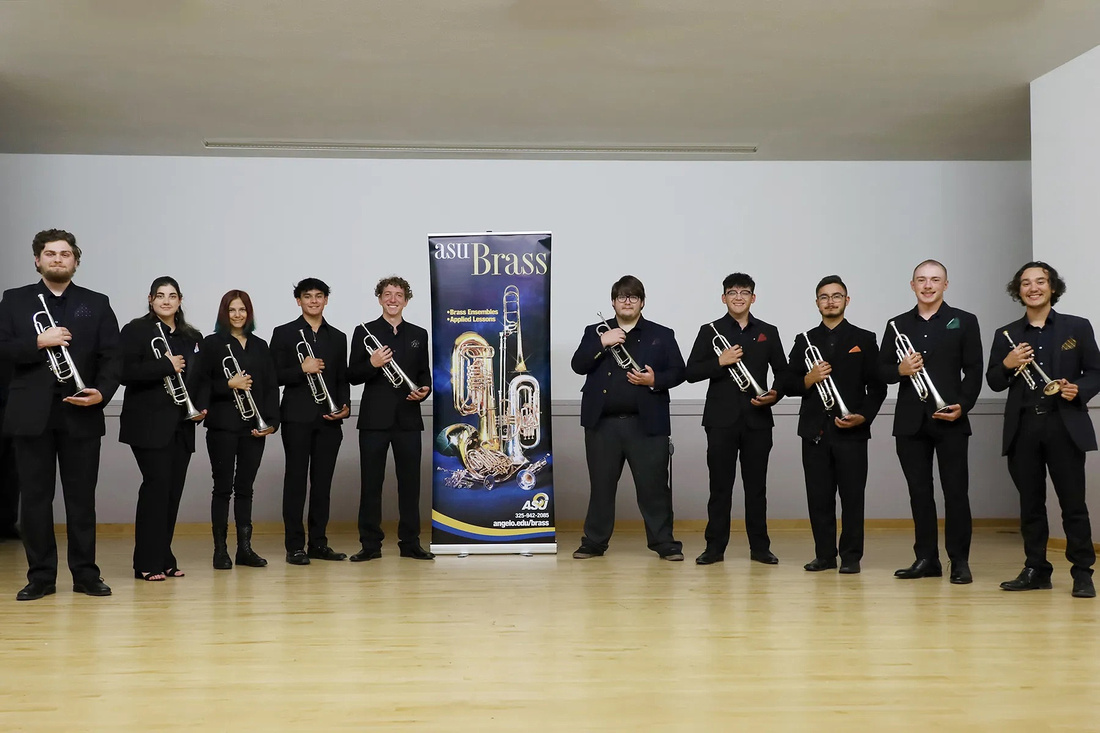 The Arkansas State University Trumpet Ensemble performed two works for their prelude. On Jason Dovel’s Giza Necropolis, the highly polished performance by the large ensemble featured exceptionally played technical passages and authoritatively played lyrical solos from many members of the ensemble. On the Overture to Die Fledermaus, a much smaller ensemble performed the piece from memory and with some light choreography. Their outstanding rendition of this popular orchestral work was rewarded with a hearty round of applause from an appreciative audience. (Benjamin Hay) 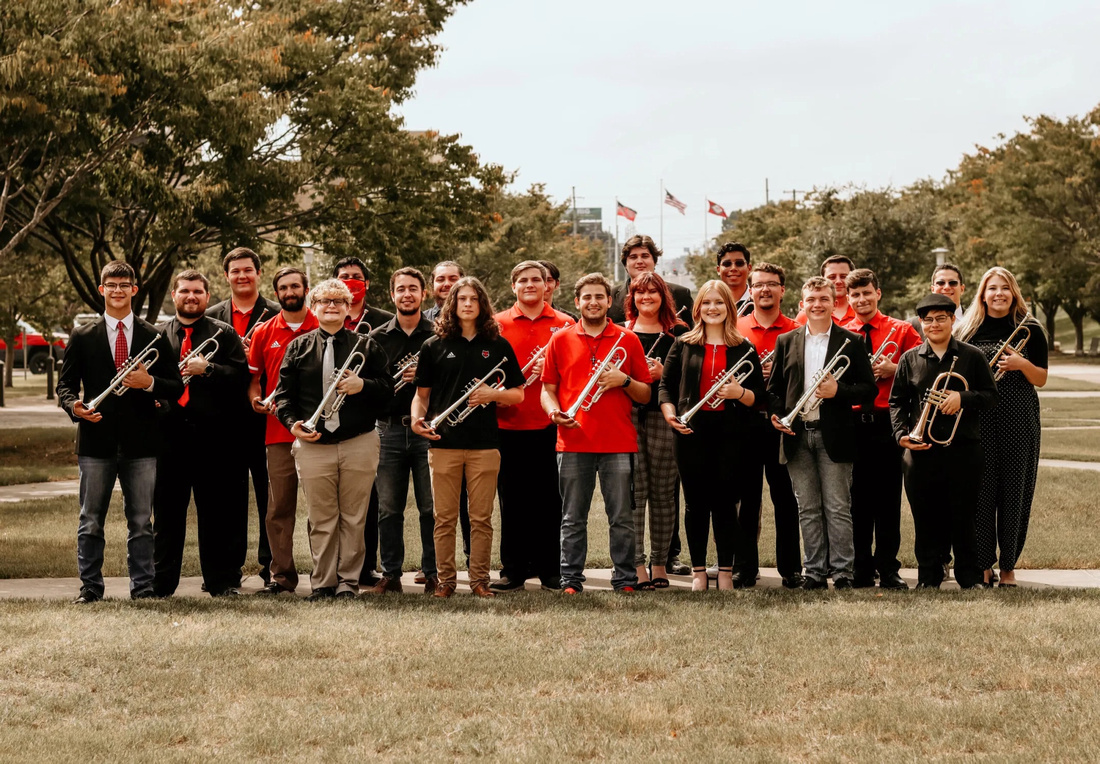 The Boston University Trumpet Ensemble, joined by their professor Terry Everson, performed Borodin’s Polovetsian Dances completely from memory. The ensemble played well both as individuals and as an ensemble. The two piccolo players had particularly impressive performances of incredibly challenging parts in this very well-received work. (Matthew Vangjel) 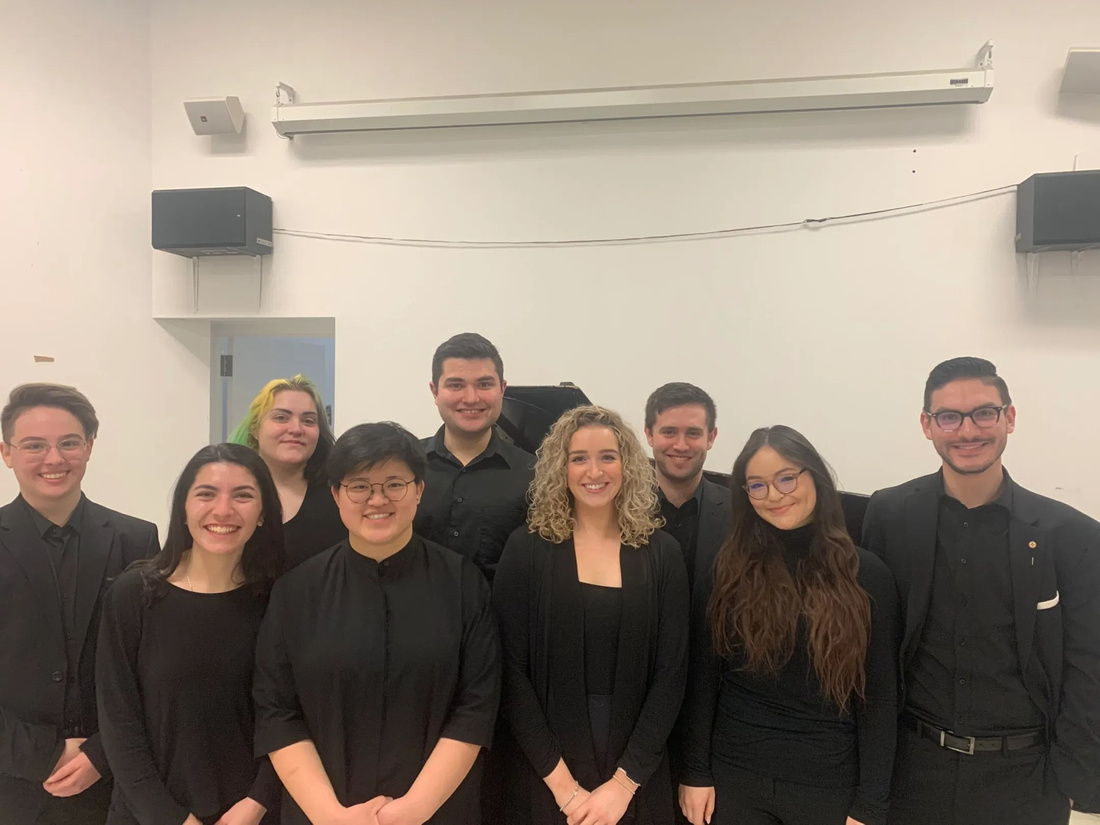 The Brighton High School Trumpet Ensemble provided amazing power and precision throughout their jaw-dropping performance, which was done entirely from memory with the ease of ensembles twice their age. Their dynamic performance showcased tremendous diversity in their musical timbre and artistry. Their performance was truly beautiful and powerful. (James Peyden Shelton) 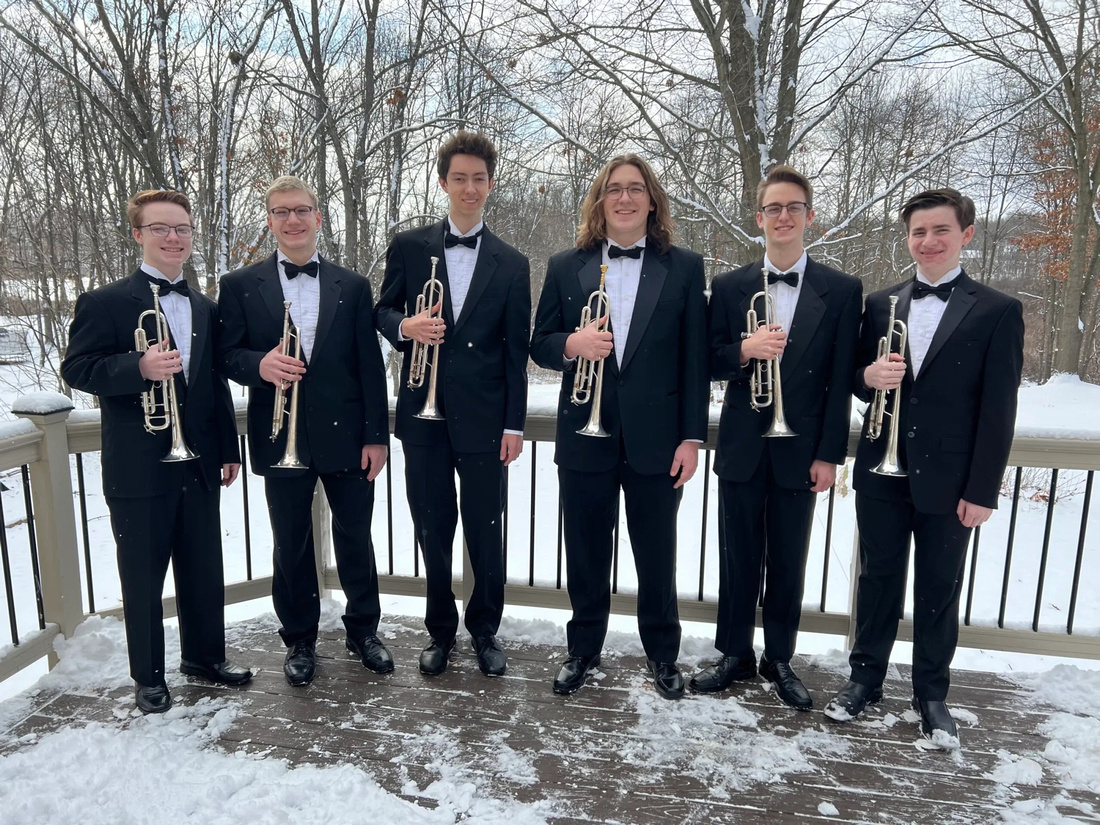 The Charger Trumpet Quintet, high school students from Brownsville Veterans Memorial Early College High School in Brownsville, Texas, under the direction of Jaime Ochoa, Jr., performed in impressive fashion. Each member of the ensemble performed with musical sensitivity and chamber music skills rarely found in ensembles of that age. It was a rousing performance, capped by these young performers’ confidence in performing on an international stage. (Joe Nibley) 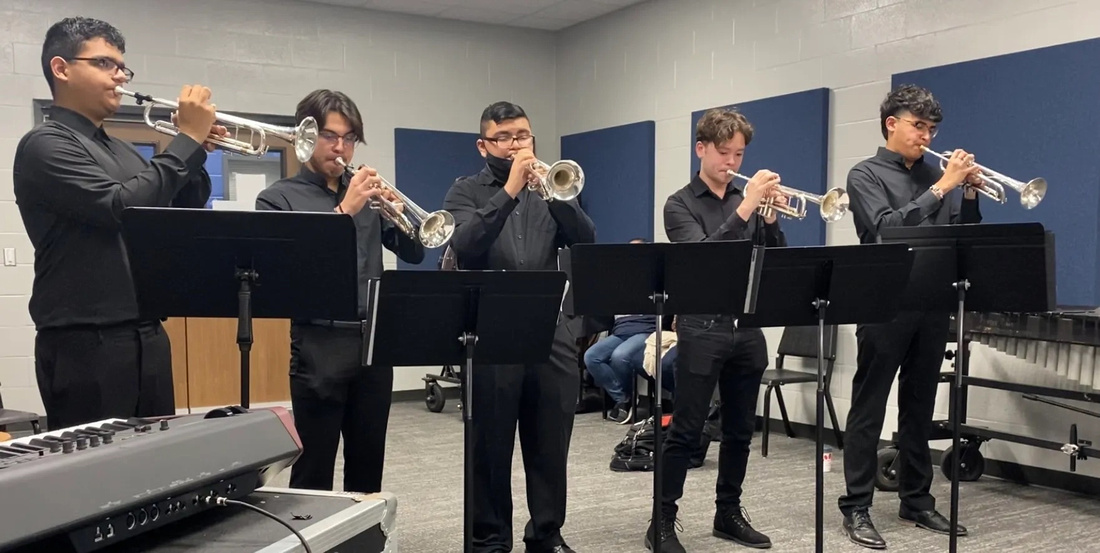 In the Duquesne Trumpet Ensemble’s prelude performance, the ensemble was highly polished and featured remarkable virtuosity from all members. The technical demands of this arrangement were formidable, especially for the piccolo trumpets, and these challenges were met brilliantly. The performance received an animated applause and provided an outstanding preamble to the performance that followed. (Benjamin Hay) 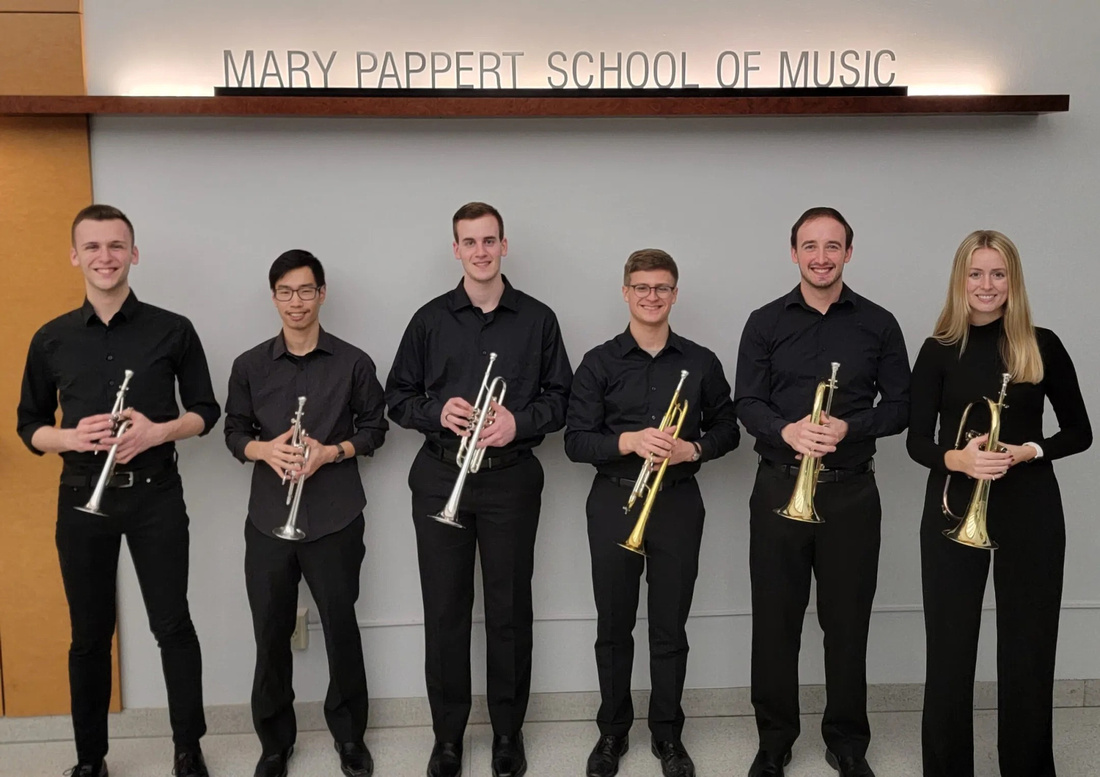 The Eastlake Trumpet Ensemble performed Eric Ewazen’s Concert Fanfare to welcome attendees to Phil Snedecor’s Thursday afternoon session. The group gave an exciting performance to an enthusiastic audience. They exemplified great chamber playing, connecting in a musical and captivating way not just with each other, but with the audience as well. It was clear that they were enjoying themselves, which made for a great prelude performance. (Brianne Borden) 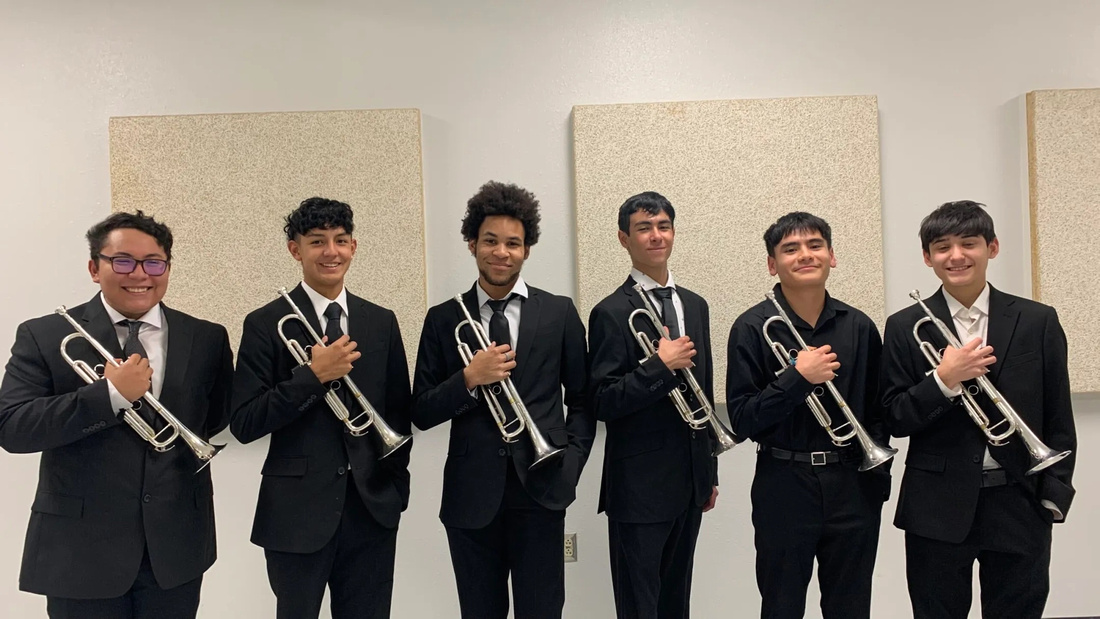 The Emporia State University Trumpet Ensemble gave the audience a performance full of energy and musicality. Their opening piece, Flourish for Ten Trumpets, perfectly highlighted the ensemble’s crisp articulations and power. The addition of a euphonium for this piece provided a wonderful depth of sound to the group. The second piece was an arrangement of Mozart’s famous Eine Kleine Nachtmusik. The ensemble completely switched gears from the brilliant and bold opening piece to a more delicate approach. Of particular note was the ensemble’s attention to dynamics and overall gorgeous phrasing when handing off various lines of the melody. The performance was well received by all. Dr. Ziek and the Emporia State Trumpet Ensemble should be commended for their excellent performance! (George Carpten, IV)

The homogeneous power of this trumpet ensemble from Portugal had the audience on the edge of their seats as the group showcased their amazing precision in articulation. Kevin McKee’s Dürrenhorn Passage truly highlighted the ensemble’s amazing diversity in timbre and the virtuosity of each performer. José Ursicino da Silva’s lively Fantasia Brasileira showcased every aspect of the ensemble’s strengths through four short movements that tested their dynamics, range, precision, and rhythmic clarity. This was a truly amazing prelude performance. (James Peyden Shelton) 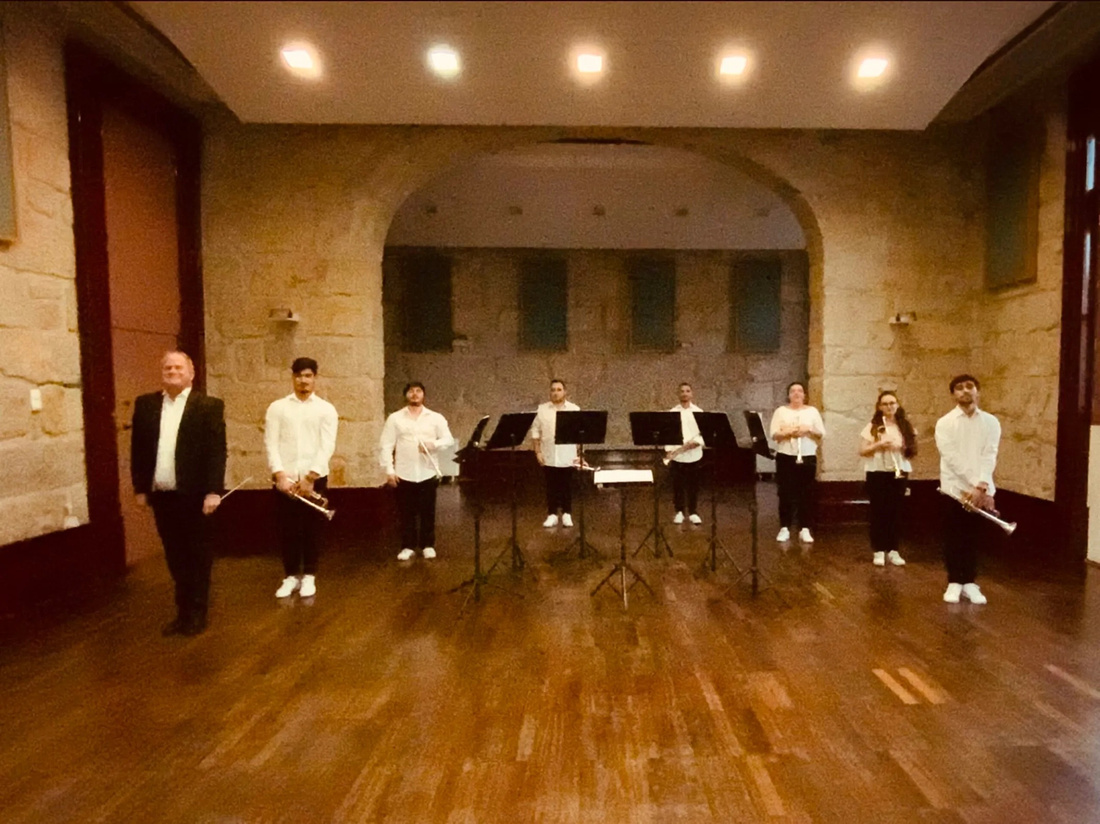 Three for Four by James Olcott

The sounds of the four musicians in this ensemble blended beautifully, and the delicacy of James Olcott’s Three for Four was very well executed. The performance was a promising beginning to an innovative concert of very stylistically different repertoire. (Christopher Luebke-Brown) 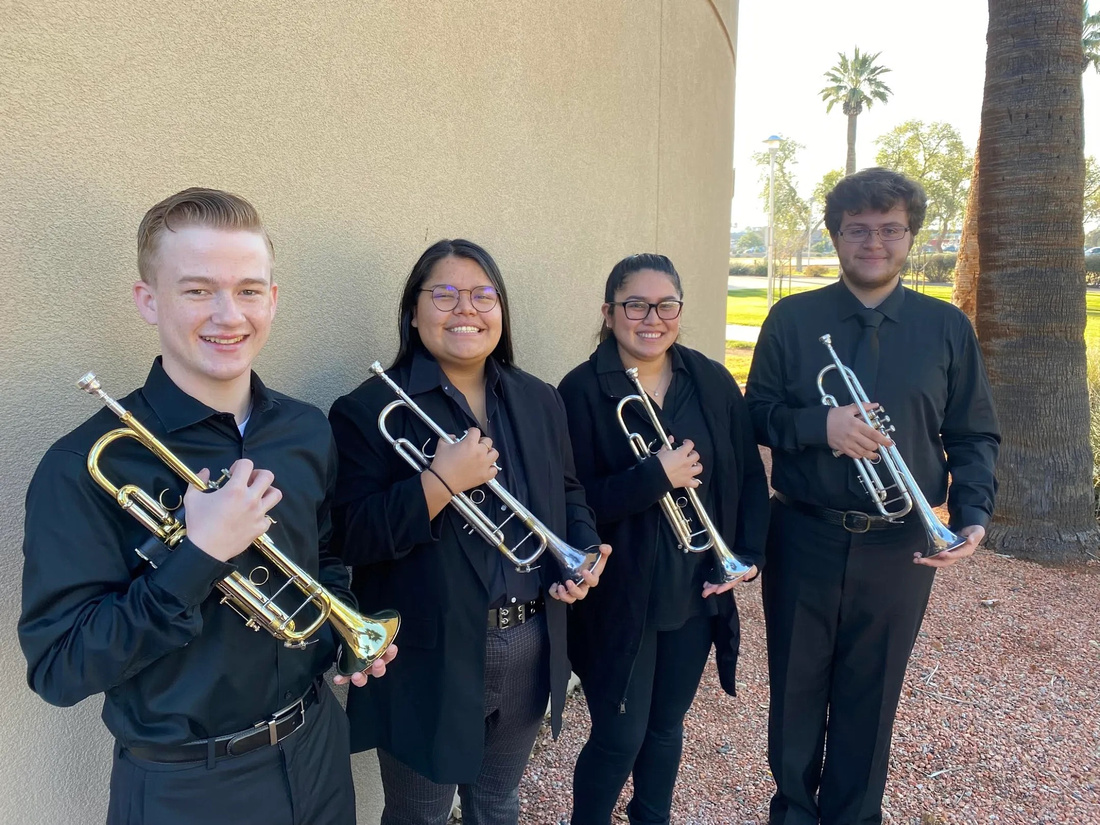 The IUP Alumni Trumpet Ensemble came together to honor the retirement of their teacher, Dr. Kevin Eisensmith. The premiere performance of William Stowman’s Fanfare for the Oak Grove was a wonderful way to kick off the evening with its beautiful chords, brilliant ensemble, and heroic sounds. Jeremy Leidhecker’s Three Fourteen, referencing Dr. Eisensmith’s studio number, is meant to represent the full variety of music possible to come from his teaching and allowed the ensemble to run the gamut of musical possibilities. (Kyle Millsap) 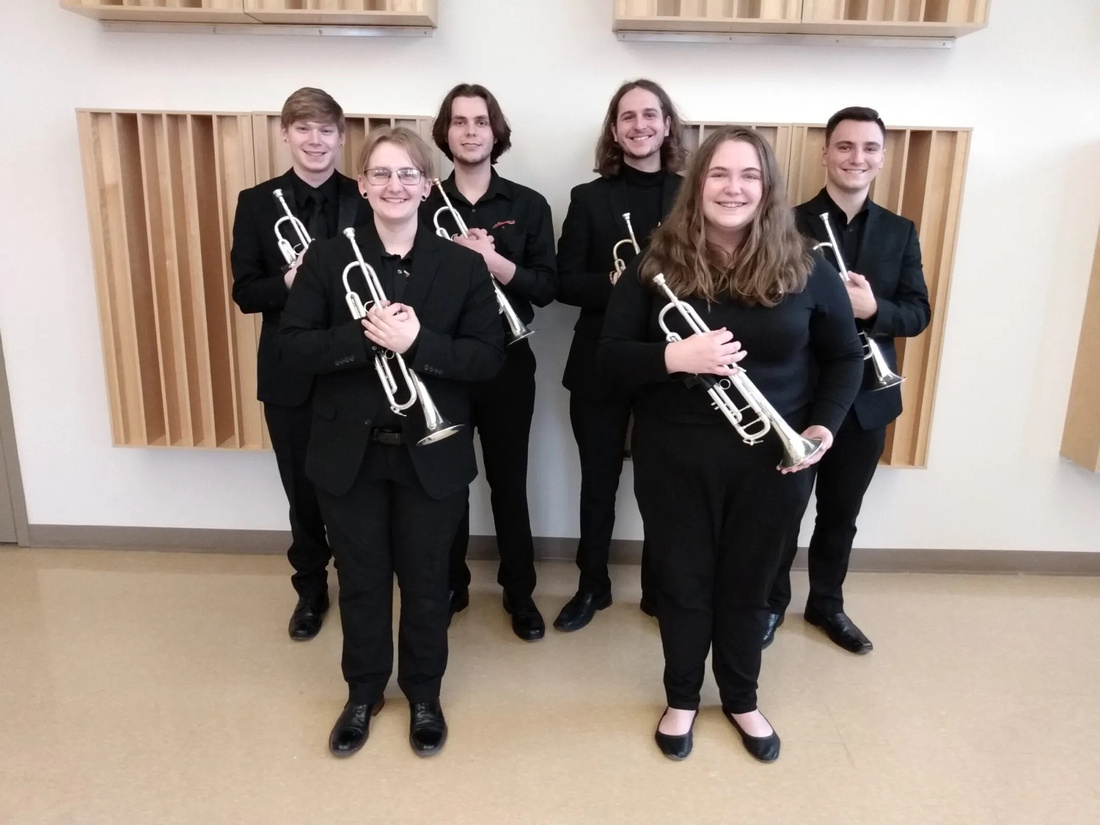 The Lone Star State Trumpet Guild, under the direction of John Irish, played an exhilarating two-piece set, opening with the brilliant La Peri by Paul Dukas, arranged by C. Fortner, who was present in the audience. The expressive sounds of these professional musicians were well showcased through this marvelous arrangement. The second selection was the comical crowd-pleaser Spamalot and the Holy Grail by John Du Prez and Eric Idle, arranged by A. Patterson. This piece had the audience laughing with sections of horse hoof clicks, a horse whinny, and a chant sung by all musicians while hitting their books on their foreheads. A selection like this shows the strong and wide-ranging abilities of this wonderful group. (Maryna Pohlman) 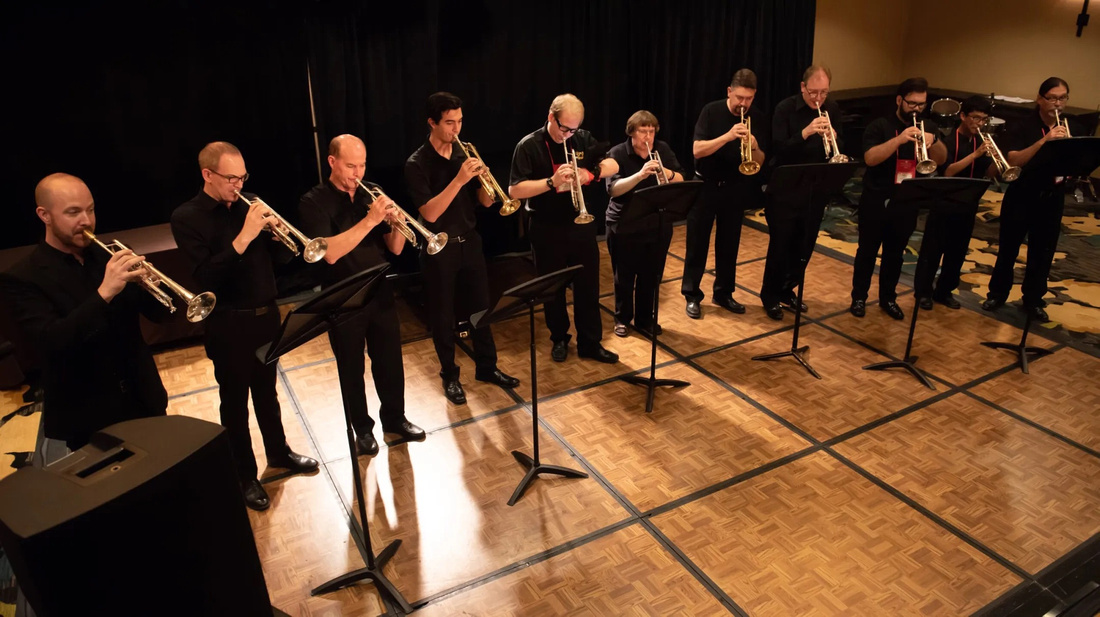 Under the direction of Dr. Matthew Vangjel, the Louisiana State University Trumpet Ensemble performed a beautiful and relatively unknown work for trumpet ensemble. In the technical sections, the students maintained a light crispness in their articulation, which kept the piece moving almost like a stream bubbling its way down the mountainside and gave the performance musical drive and direction. In the lyrical sections, they maintained an impressive attention to intonation, blend, and ensemble that gave the audience a sense of weightlessness and floating. These students have very bright futures and their teacher, Dr. Vangjel, is doing impressive work at LSU. (Joe Nibley) 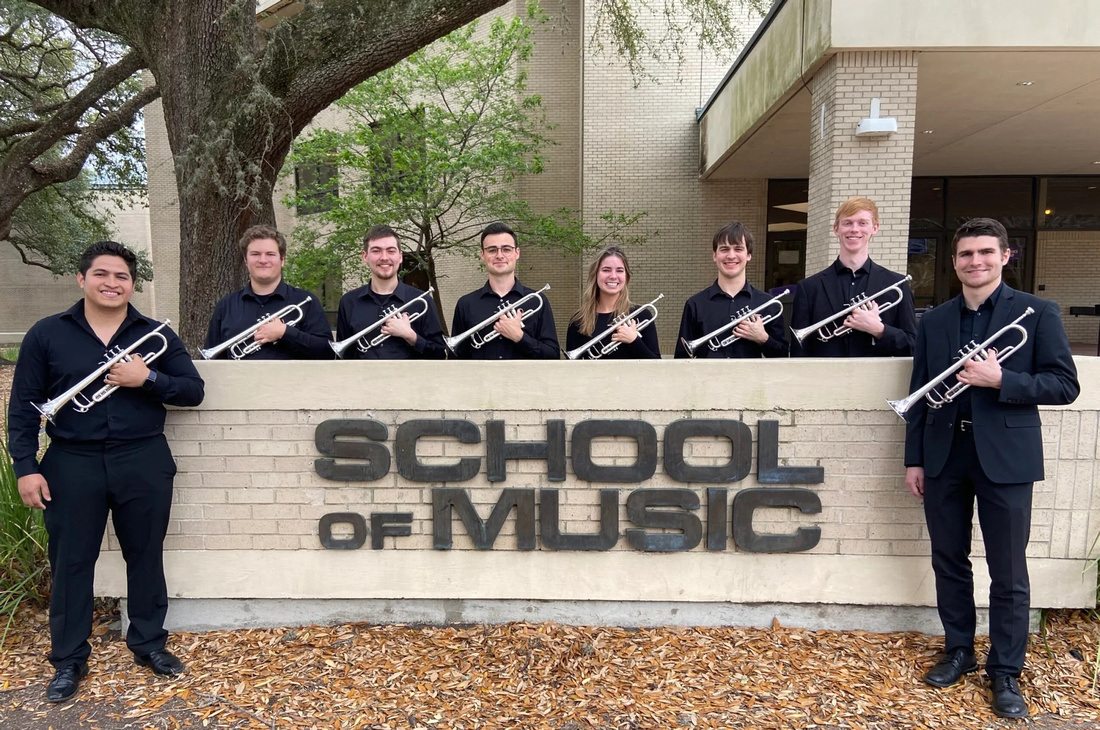 Into the Blue by Kevin McKee

In the NDSU Trumpet Ensemble’s passionate performance of Erik Morales’s Into the Blue, tangible excitement filled the air. The group’s grasp of dynamics made for a captivating performance that noticeably elevated the energy in the room. It was also a nice contrast to the recital that followed, which featured mostly lyrical works. (Eli Denecke) 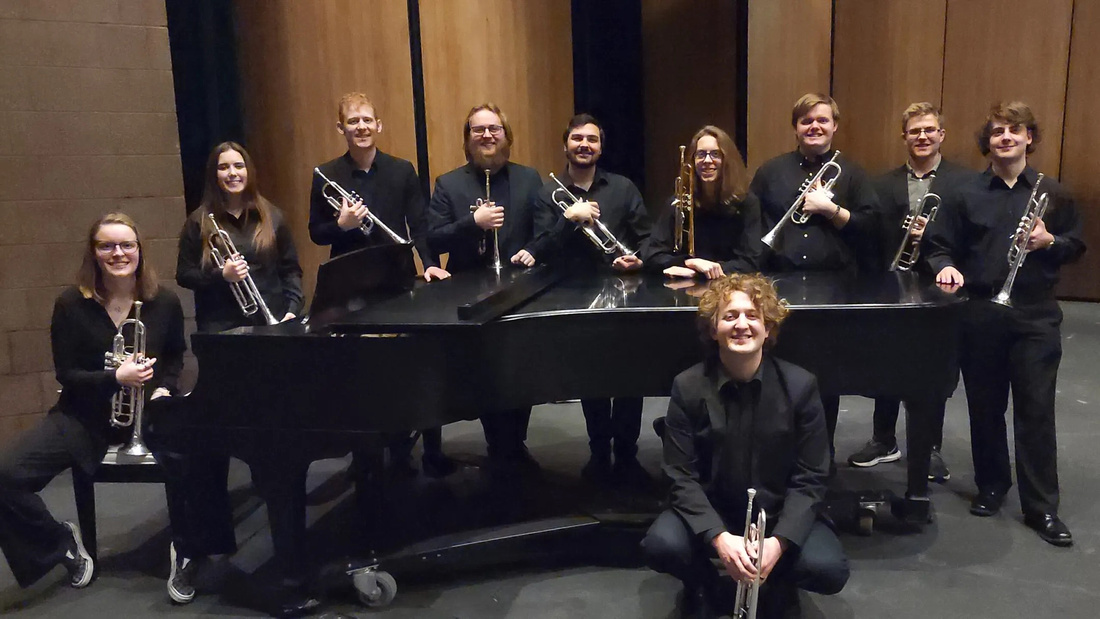 Directed by David D. Torres, the Southern Arkansas University “BLUE” Trumpet Ensemble performed Marie Speziale’s arrangement of Fanfare from La Peri for four trumpets and three flugelhorns. The group kicked off with a bombastic opening chord and excellent group sound. The three flugelhorns covered the parts traditionally played by the horns and low brass, which added the necessary depth to the ensemble. The group was well balanced and easily filled the room in the upper dynamics. (Marisa Youngs) 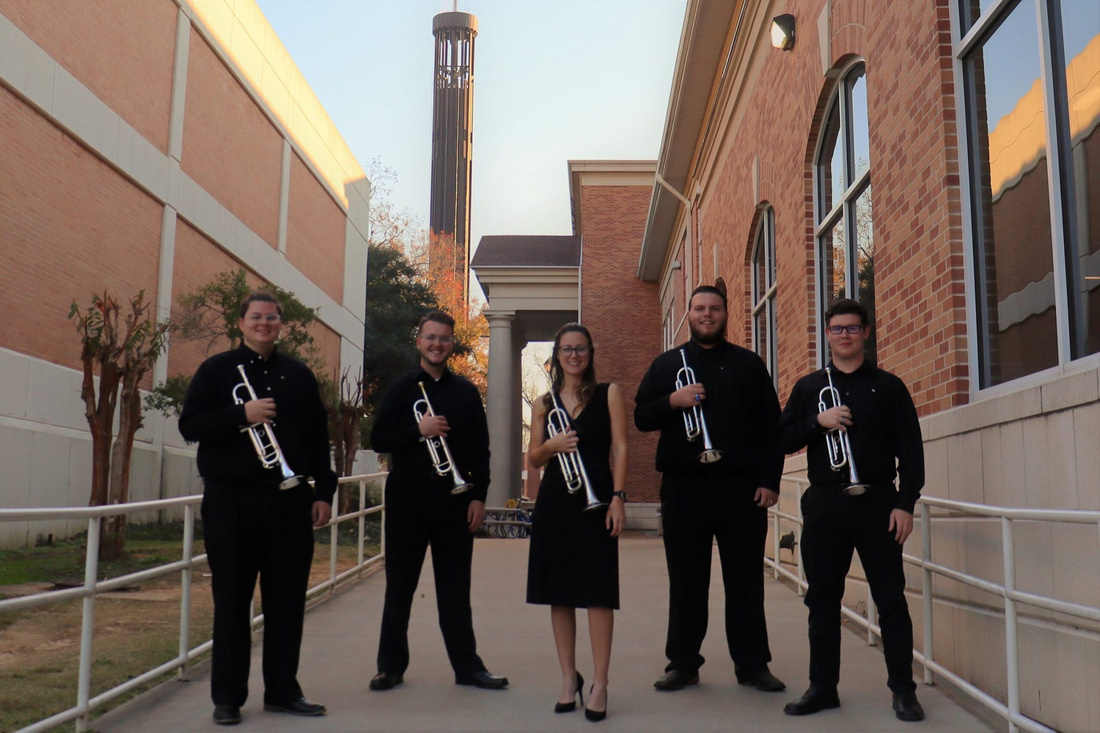 The Southwestern Oklahoma State University Trumpet Ensemble opened Saturday evening’s final concert with a spirited and dynamic performance of David Uber’s New Century 2000 AD and Eric Ewazen’s Prelude and Fugue for Trumpet Choir. The formidable, angular lines in the Uber were contrasted well by the declamatory fanfare figures in the Ewazen. The group’s vibrant sounds resonated throughout the ballroom for a captivating performance from this well-balanced ensemble. (Peter Wood) 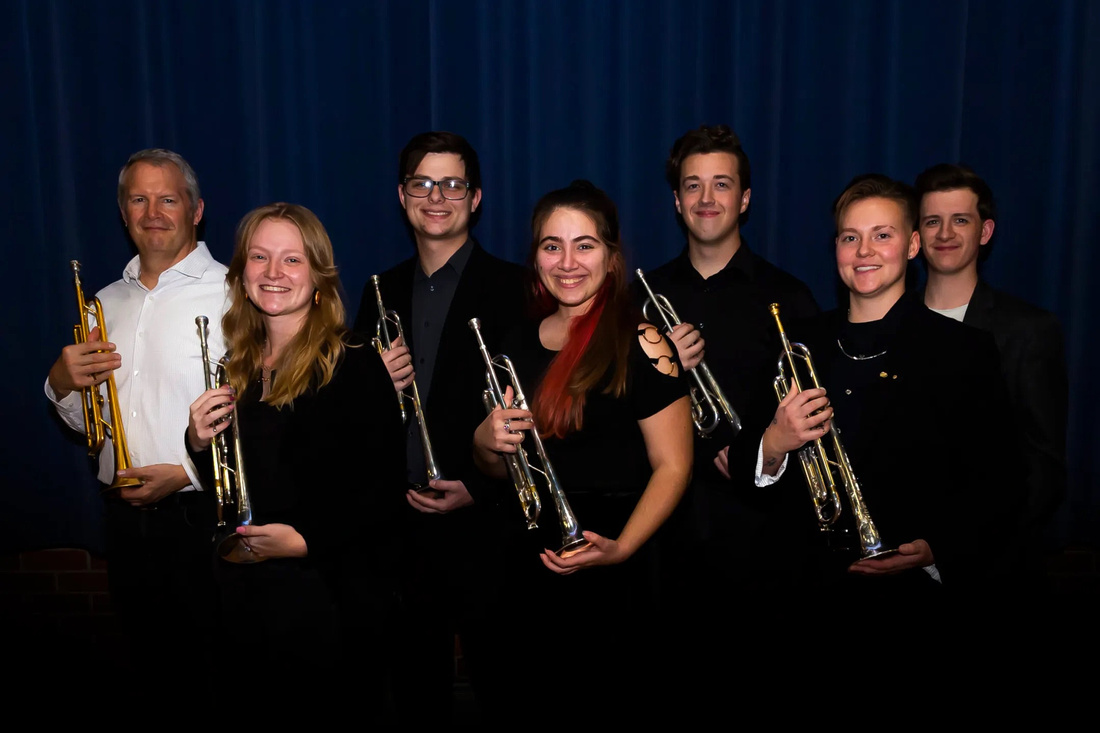 In the Tarleton State Trumpet Ensemble’s prelude performance, the leadership of each individual was apparent in the various solo lines throughout the piece. This highly skilled group played with a uniform sound that resonated well throughout the Travis Park Church sanctuary. (Eli Denecke) 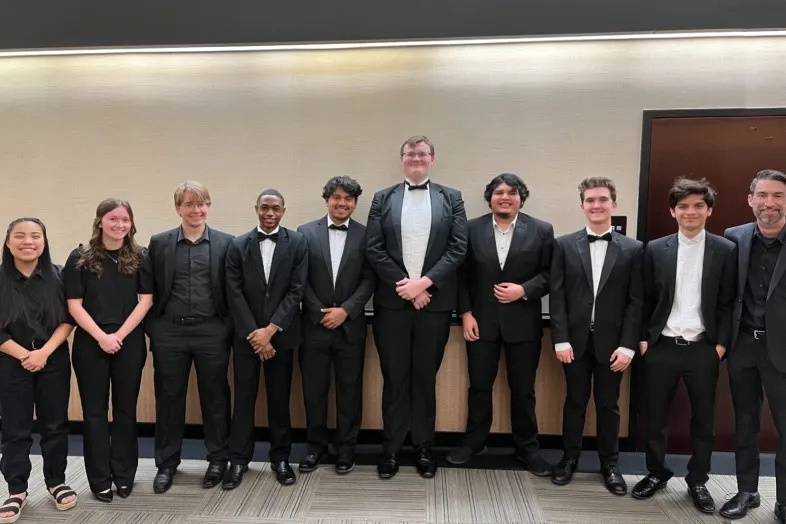 Fanfare for an Angel by James Stephenson

The TAMIU Trumpet Ensemble, directed by Dr. Nicole Gillotti, performed Jim Stephenson’s Fanfare for an Angel as an opening prelude for the second New Works Recital. This exciting rendition was defined by their soloistic musicianship while still maintaining a balanced and unified ensemble sound. Each of the performers was given time to shine, and their artistry was inspiring. (Christopher Luebke-Brown) 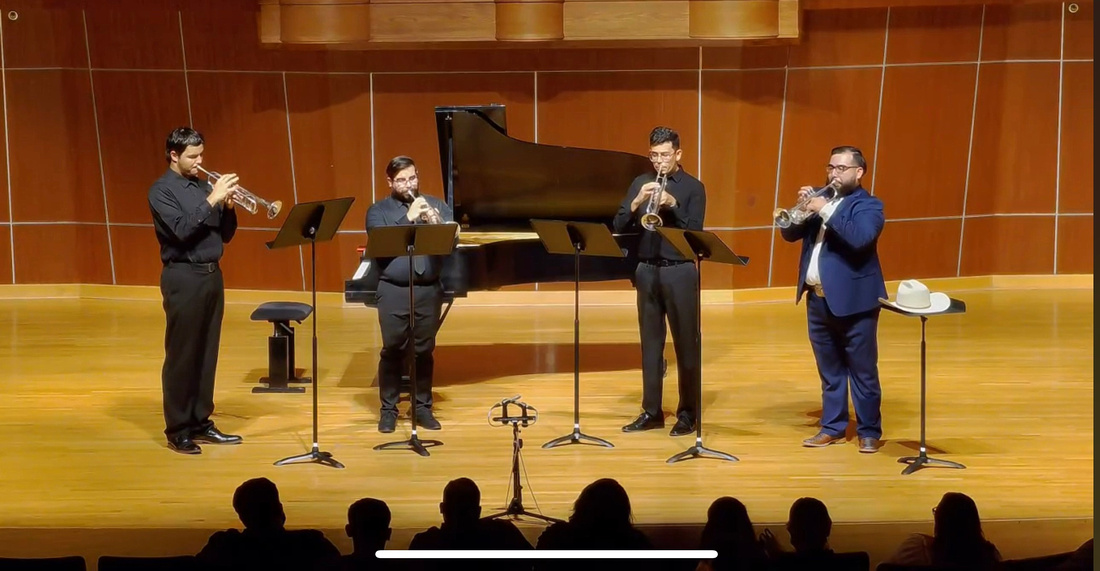 In the TAMUCC Trumpet Ensemble’s performance of Eric Ewazen’s Concert Fanfare, their sound exploded into the hall from the very first note and held the audience's attention to the very last note. Their crisp articulation and contrasting color within the ensemble was a true pleasure to experience. It was the perfect opening fanfare for the wonderful concert that followed. (James Peyden Shelton) 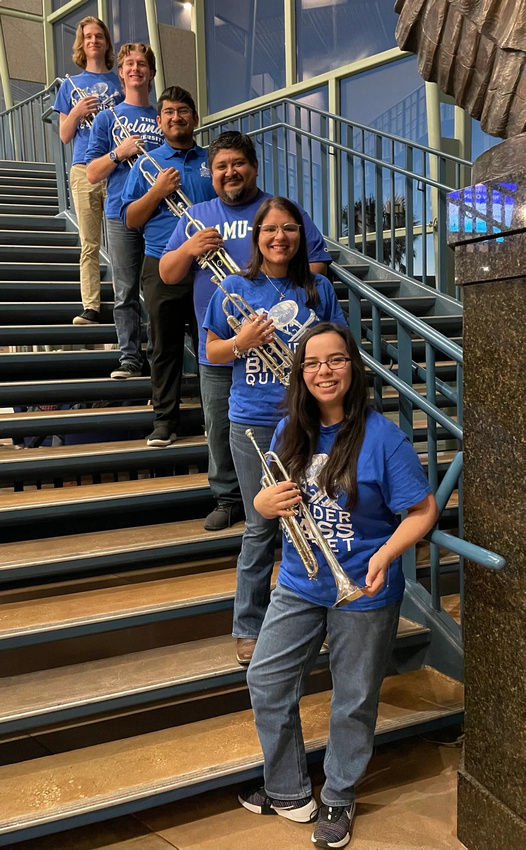 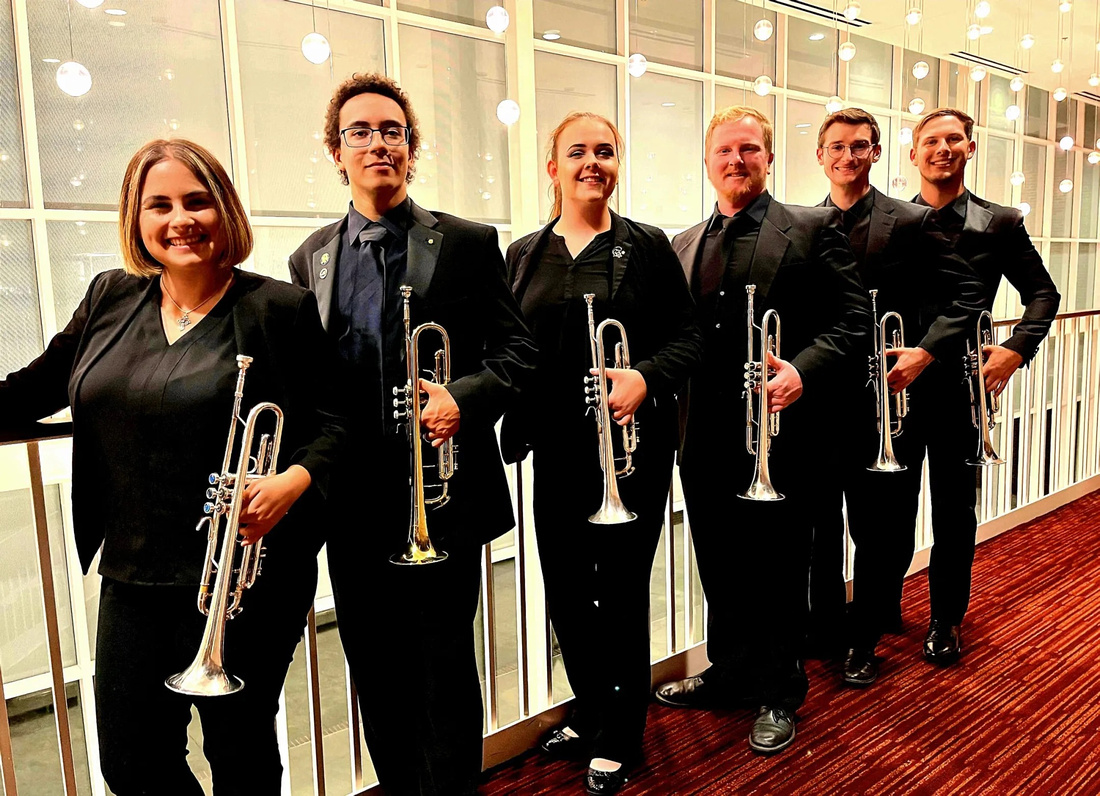 The members of the Jalisco Trumpet Ensemble from Texas A&M University- Kingsville played a wonderful opening prelude for the late-night concert in the Regency Ballroom. Morales’s Metallic Fury featured the group’s exciting playing and unified articulations. Belck’s colorful arrangement of The Summer Knows featured several members of the group, but it was a special opportunity to spotlight their exceptional lead trumpet player. The group had a strong sense of tone and poise as they delivered a terrific performance. (Nick Volz) 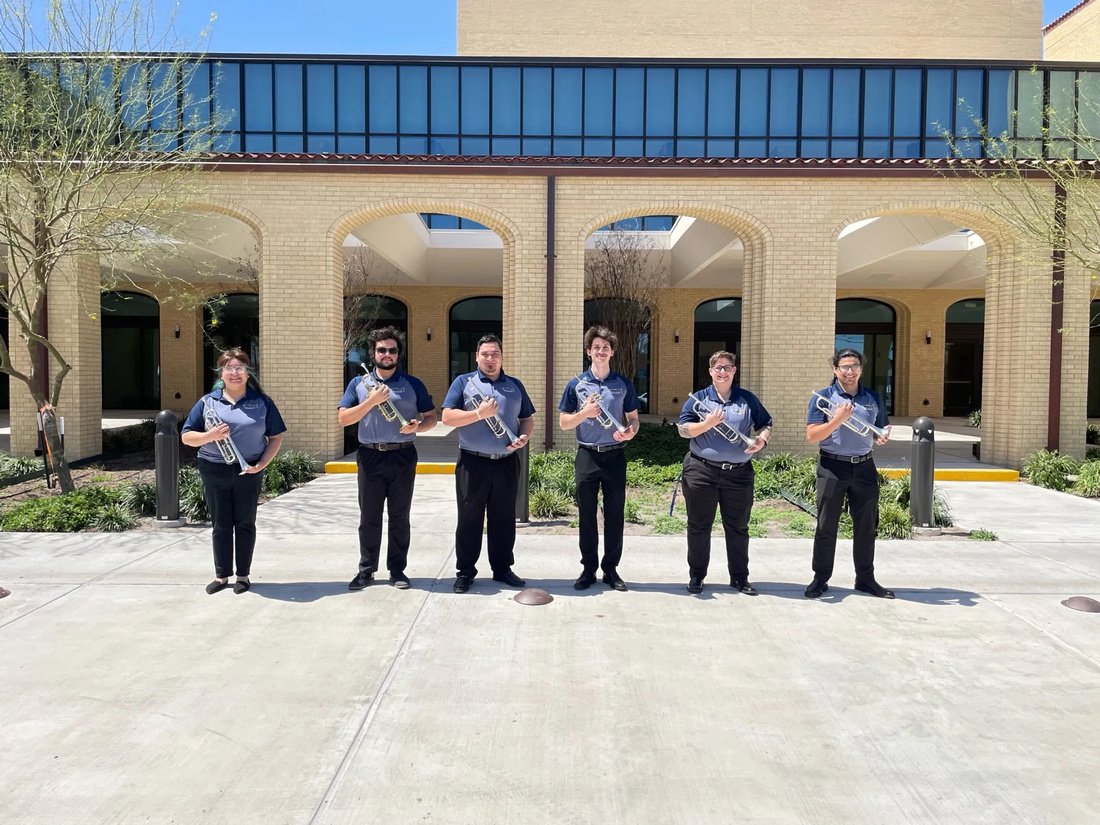 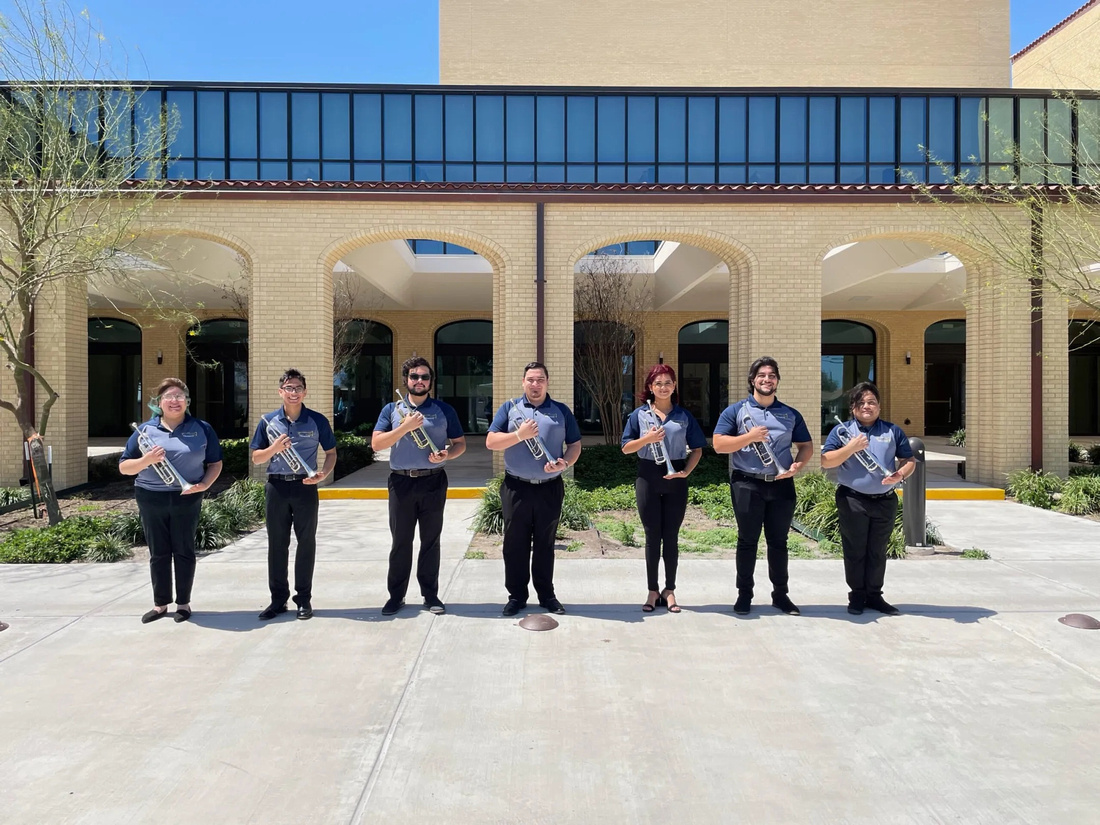 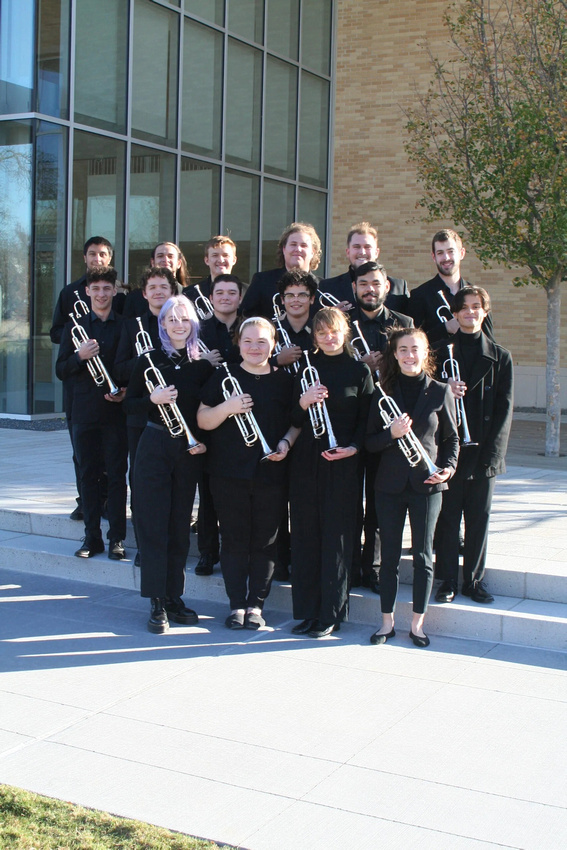 The University of Colorado Boulder Trumpets performed an arrangement by Dr. Ryan Gardner of Rimsky-Korsakov’s Capriccio Espagnol. This arrangement was done in a very smart way, mixing the instrumentation between duos, trios, and quartets and only involving all five parts in limited large and loud moments. This piece earned the ensemble a first-place finish at the National Trumpet Competition just a few months prior. Particularly effective was the unique use of tin foil sheets as mutes over the bell to create the effect of a snare drum. The ensemble performed the selection memorized and used unique stage positioning and bell direction to enhance musical effects. Theyand performed in a well-polished way with excellent communication, intonation, phrasing, and balance across the ensemble. (Scott Hagarty) 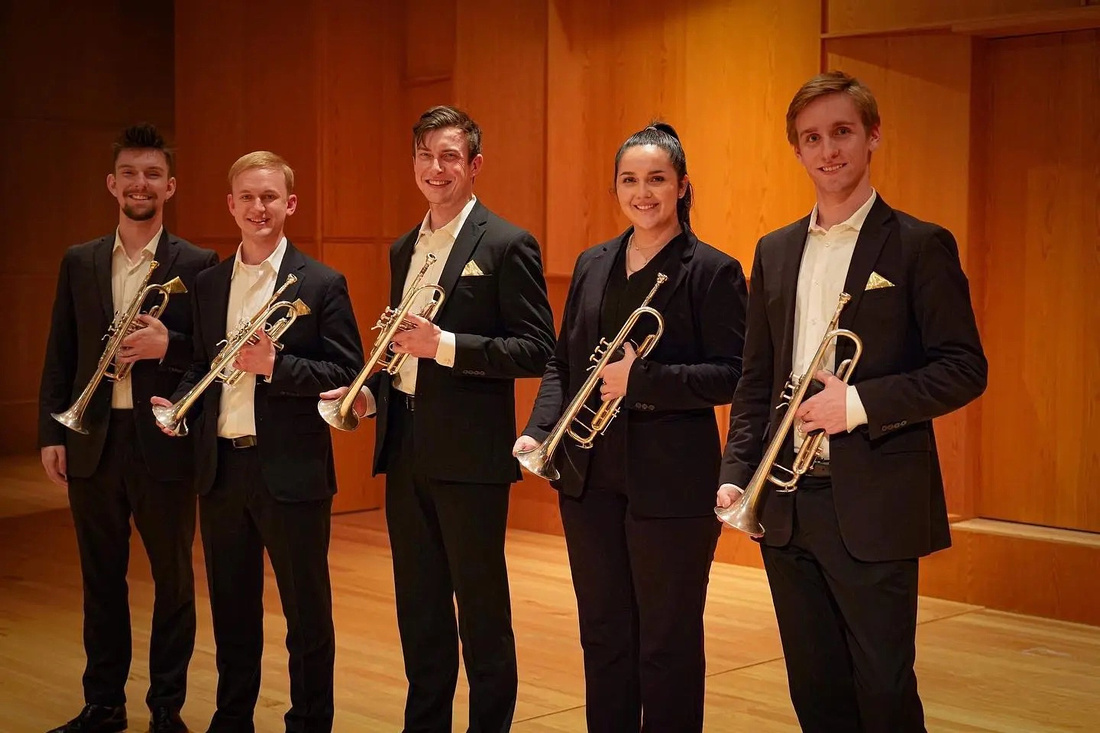 The UNLV Trumpet Studio opened with a composition by one of their alumni, Jorge Machain. The ensemble did a great job matching styles and blending their sound to make the harmonies in the piece really pop. They continued their performance with Erik Morales’s X1, in which the ensemble’s attention to rhythmic detail was obvious right from the start. It featured confident solos from ensemble members and a great array of tonal colors through all sections of the piece. (Kyle Millsap) 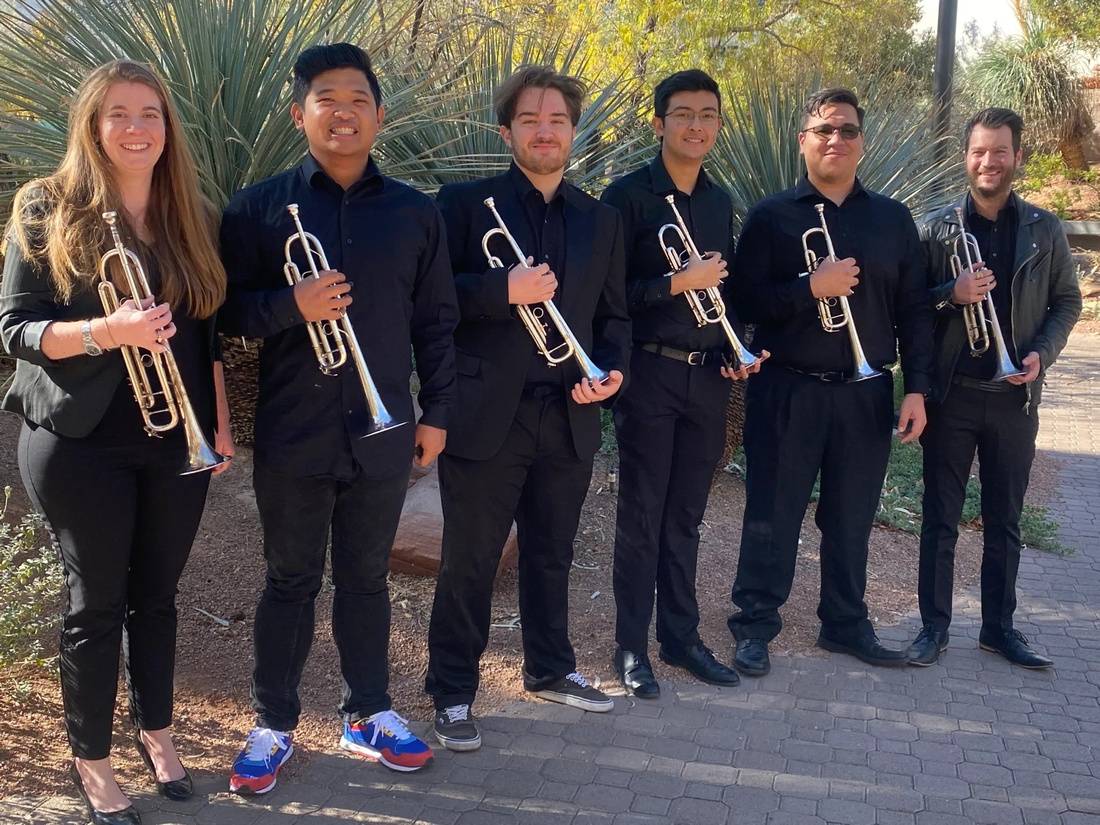 The University of North Florida Trumpet Ensemble opened their prelude with a rousing performance of Joseph Price’s Intrada Dramatica, which was full of excitement. Their second piece, Gary Smart’s Holler, was equally excellent, showcasing a range of styles. The final piece, the first movement from Fantasia Brasileira, was a great way to conclude the program with lots of energy, marking a perfect introduction to the evening’s concert. (Kyle Millsap) 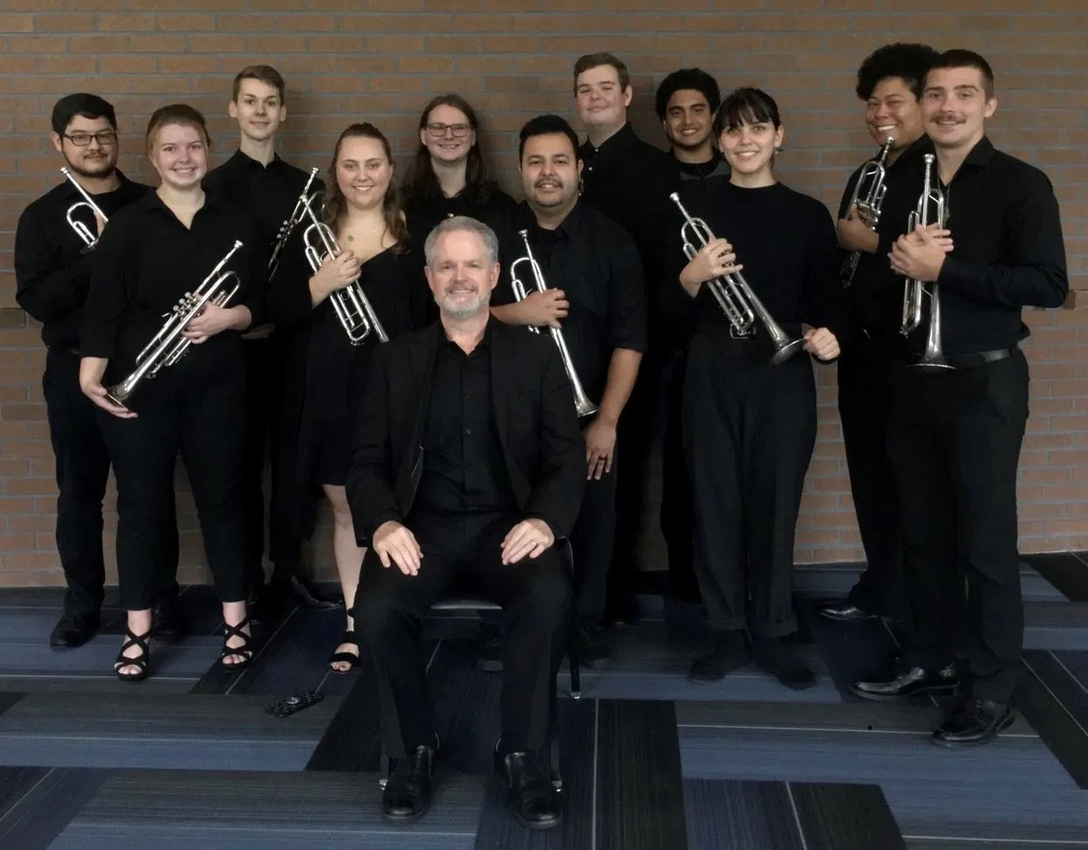 The USA Trumpet Ensemble performed Marcus Grant’s virtuosic arrangement of Crescent Moon Dance, a composition from the animé show entitled Hibike! Euphonium. The group combined B-flat trumpets and flugelhorn with fine piccolo playing in a display of the group’s precision. They also performed Erik Morales’s technically demanding Through Space and Time with a uniform tone concept and energetic approach that made them a pleasure to hear. (Nick Volz) 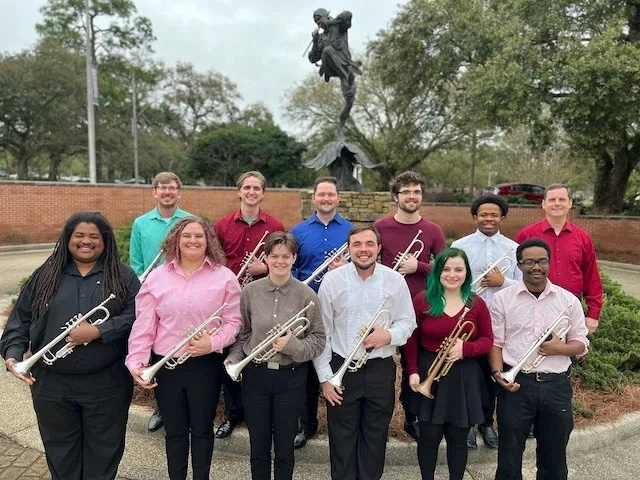 The prelude to the Festival of Trumpets concert featured three pieces performed by the University of Victoria Trumpet Ensemble, under the direction of Merrie Klazek. The first piece, Klazek’s own Awakening, was an exciting opening, featuring flourishes and regal fanfare-like lines. Scott MacInnes’s Listen to Learn was commissioned for the UVic Trumpet Ensemble and premiered in this performance. Featuring a haunting flugelhorn duet and several trios, as well as allusions to well-known orchestral repertoire, the ensemble gave a captivating performance of MacInnes’s piece. (Julia Bell) 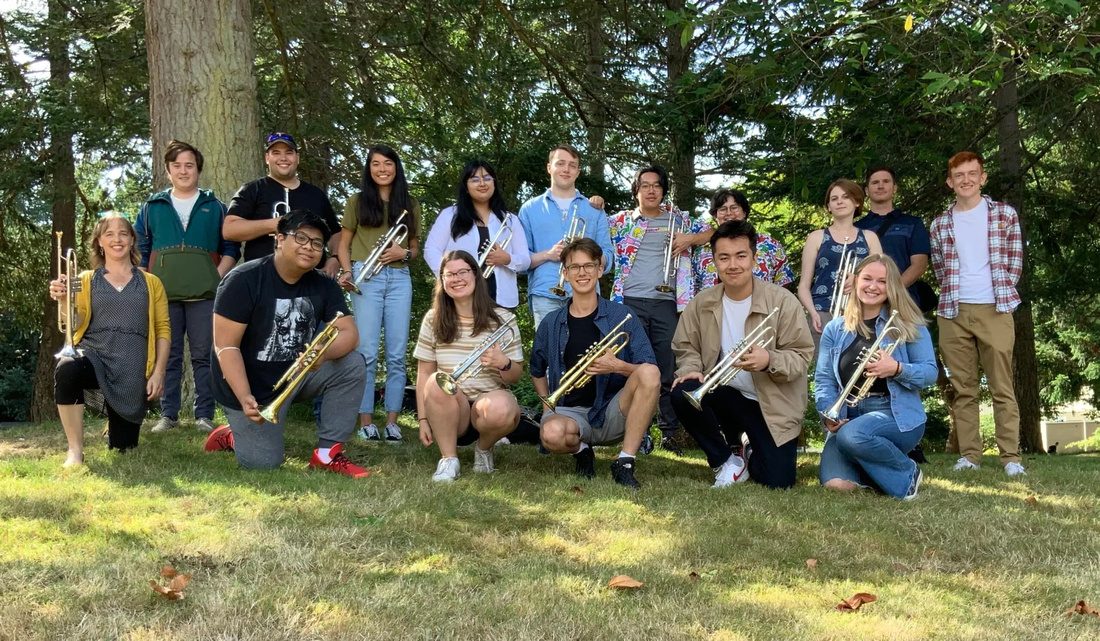 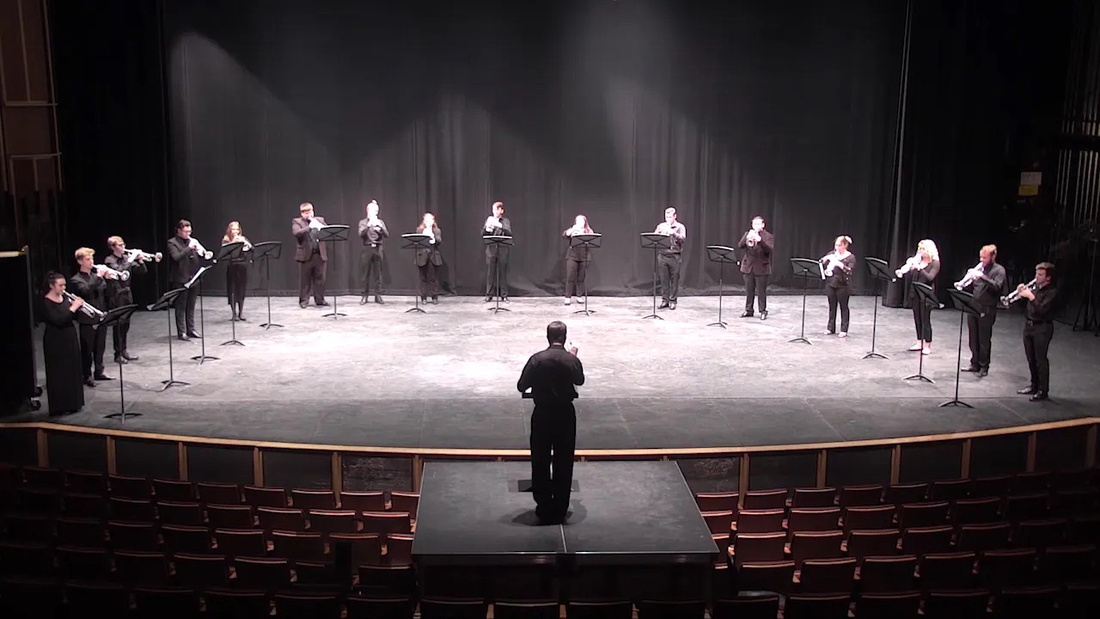 The Westminster College Trumpet Ensemble presented an energetic rendition of Erik Morales’s Conquest. The group put on an excellent display of musicality and balance throughout this challenging work. The performance was well received by the audience and served as a great introduction to the clinic that followed. (Javian Brabham) 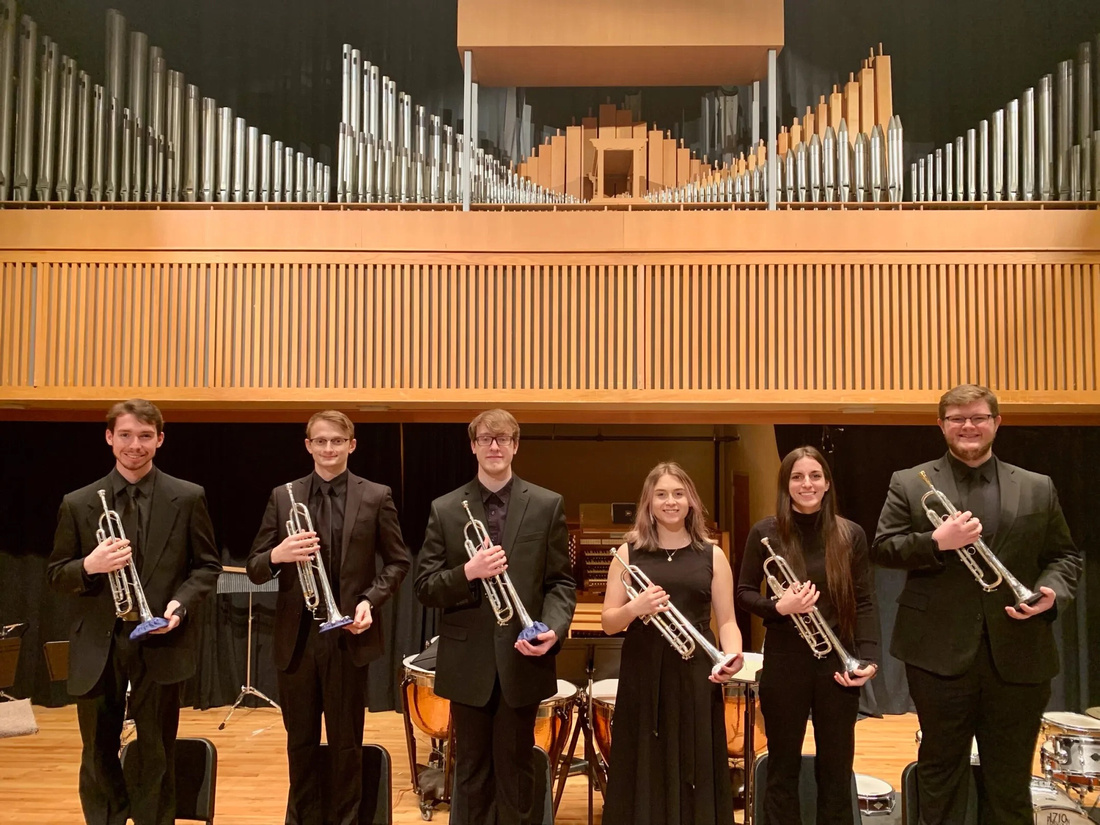