ITG Legacy Reception
Alan Siebert welcomed all those in attendance at the annual Legacy Fund reception, which was open to all ITG members. He introduced Bill Pfund, who spoke about the history and purpose of the Fund, established to support projects that align with the mission of the Guild.  Longtime member Paul Kurtz encouraged those in attendance to spread the word among members about opportunities for giving that not only support our projects, but also provide a third-level back-up plan to the operating budget and emergency fund. More information about the Legacy Fund can be found on the ITG Website (https://www.trumpetguild.org/give). (GP)

Summer Night at the Orchestra

Check out the ITG YouTube Channel for videos from the concert!

This evening’s program featured a stellar roster of international soloists accompanied by the ITG Festival Orchestra, under the baton of the Swiss conductor and trumpeter, Olivier Anthony Theurillat. First on the program was Vivaldi’s Concerto No. 9 in D Major, featuring Daniel Crespo, principal trumpet of the Philharmonic Orchestra of the Teatro Colon in Buenos Aires. Playing from memory on piccolo trumpet, Crespo’s refined elegance and effortless trills spun a golden web of sound in the large auditorium. His ability to float above the sensitive string accompaniment in both lyrical and virtuosic passages was incandescent. 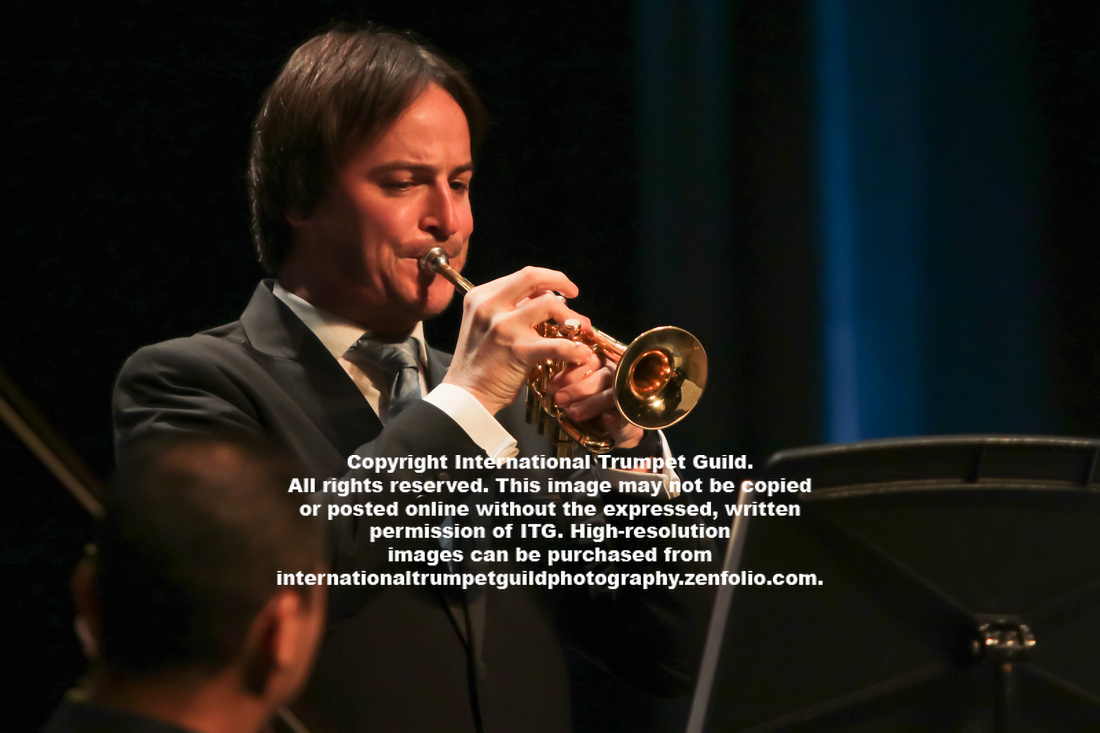 Amy McCabe of the United States Marine Band was next on the program, performing the second and third movements of Eric Ewazen’s Concerto for Trumpet and Orchestra. In the mournful second movement (Elegia), her crystal-clear tone was supported by rhapsodic string writing reminiscent of Vaughan Williams. The third movement, Allegro Agitato, featured angular interjections, propulsive rhythms, and an accompanied cadenza at the end. 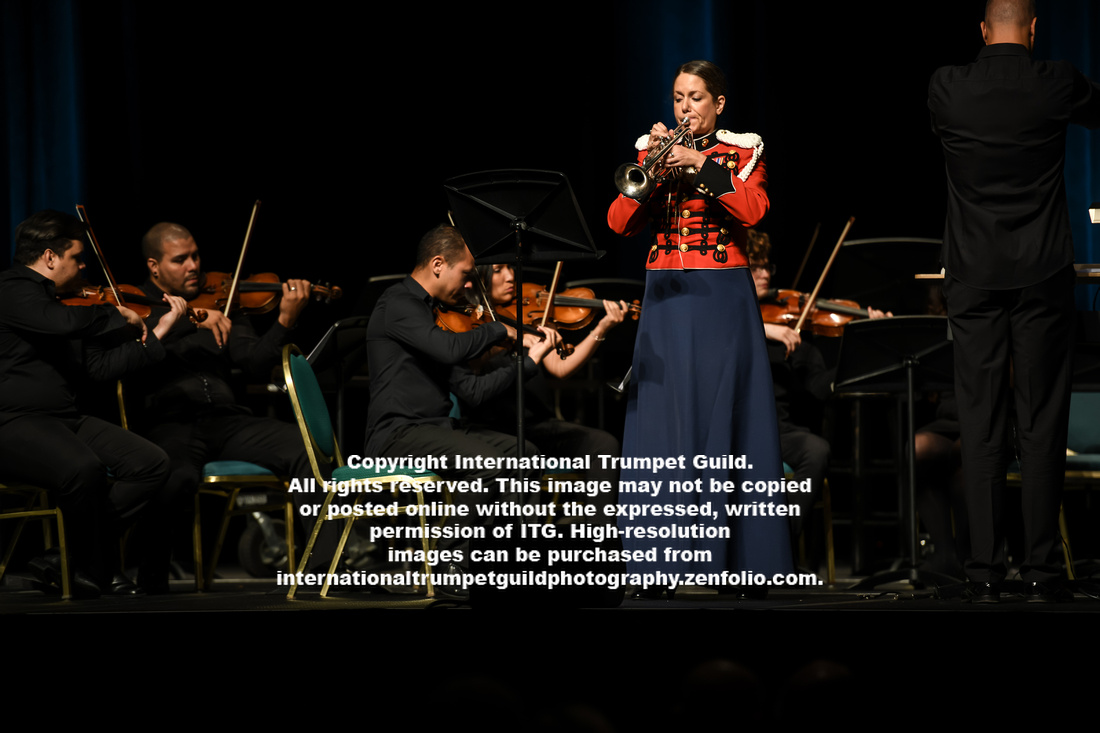 Following the Ewazen, ITG President Cathy Leach presented the ITG Honorary Award to Ryan Anthony. Because Ryan has been hospitalized for the past several weeks battling cancer, his children, Lilly and Rowan Anthony, accepted the award on his behalf while his wife, Nikki, live-streamed the ceremony on a smartphone so Ryan could watch from his hospital bed. It was an emotional moment when Lilly Anthony read an inspirational acceptance letter from her father followed by a prolonged standing ovation. 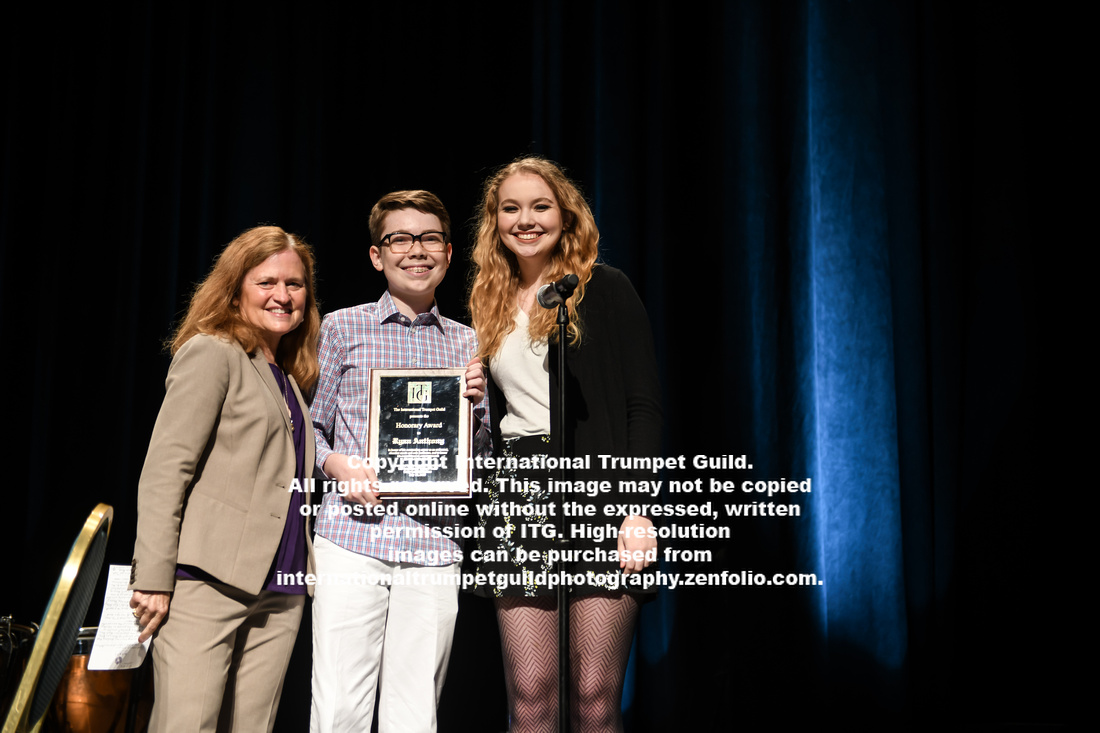 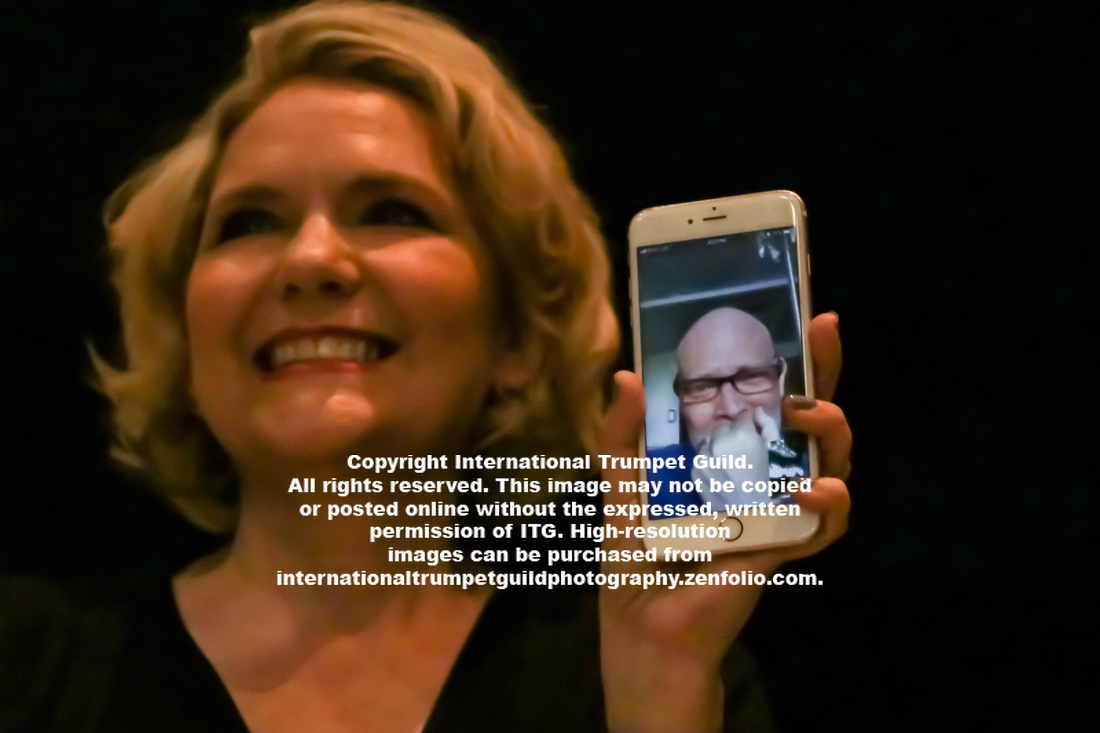 British trumpeter Matilda Lloyd was featured next in Ivan Jevtic’s Suite Concertante for Piccolo Trumpet and Strings, “Que le jour est beau!” The four-movement work, which was composed in 1985, highlighted Lloyd’s ringing tone, sparkling articulation, and rhythmic precision. Theurillat and the orchestra brought out all the expressive drama and poignancy of the challenging score. 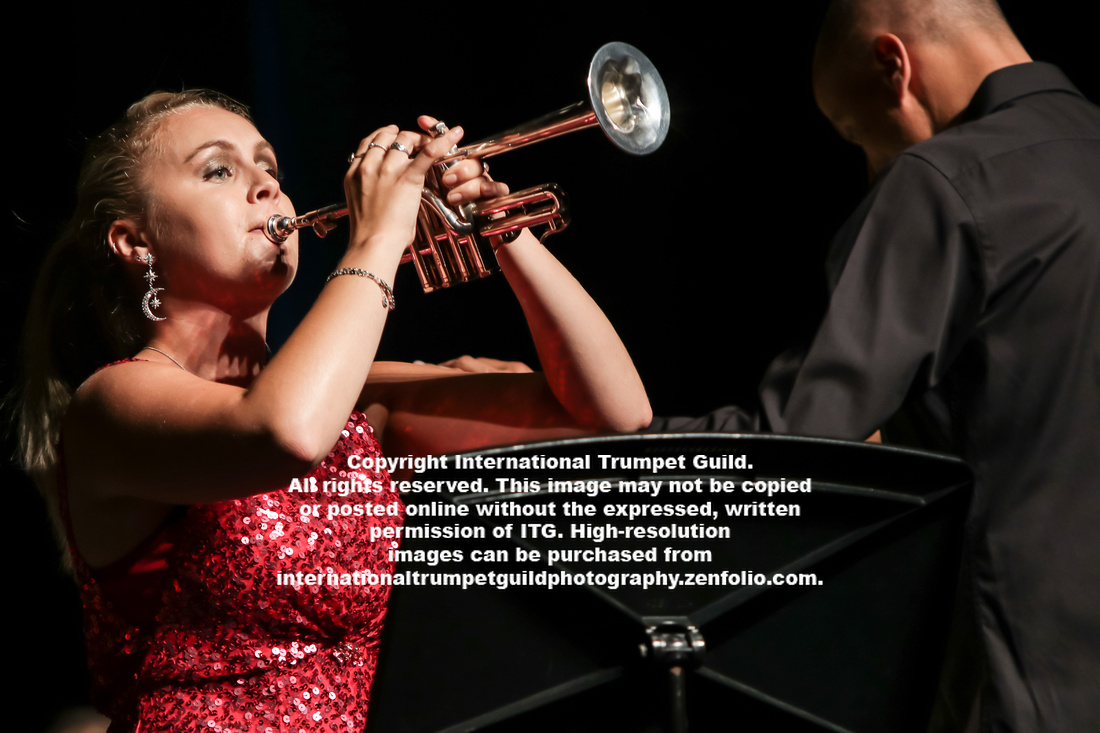 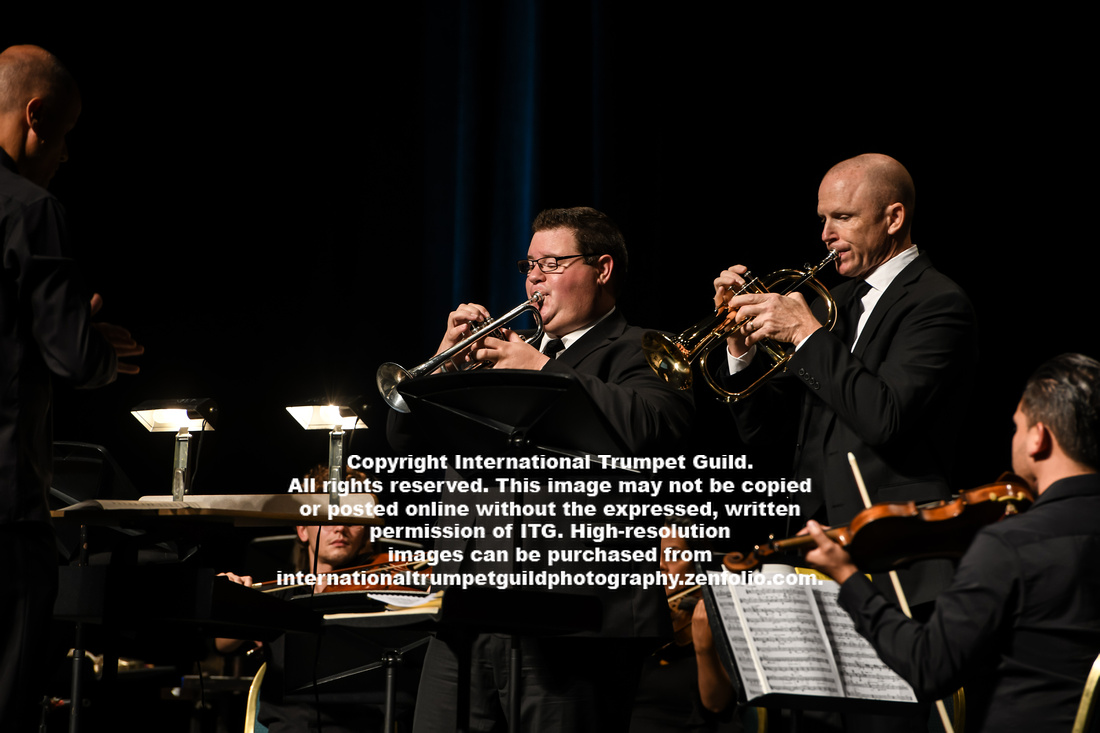 The final selection on the program, Jorg Widmann’s Concertpiece for Trumpet and Small Orchestra, “ad absurdum” (2002), was a tour de force written for Russian trumpeter Sergei Nakariakov. Performing on a B-flat trumpet while circular breathing, Nakariakov dazzled with a seemingly endless blizzard of double-tongued sixteenth notes in patterns of increasing range and complexity. What was truly “absurd” was how Nakariakov made it all seem so easy. The piece was a ferociously difficult perpetual motion that sustained an unbelievable amount of tension for fifteen minutes. According to the composer’s note in the score, “The trumpeter is a playmaker who gleefully displays maximum velocity right from the start, yet, revolving in his momentum strangely stolidly, he is ultimately imprisoned in his own virtuosity and suffocates.” If anyone felt like suffocating, it was the audience, waiting in breathless anticipation for Nakariakov’s supernaturally long phrases to end. At a few points, thundering timpani broke the tension until the piece ended with two low pedal tones and the orchestra fizzled to silence. The audience showered Nakariakov with a rousing ovation as all the soloists returned to the stage for a final bow. (EK) 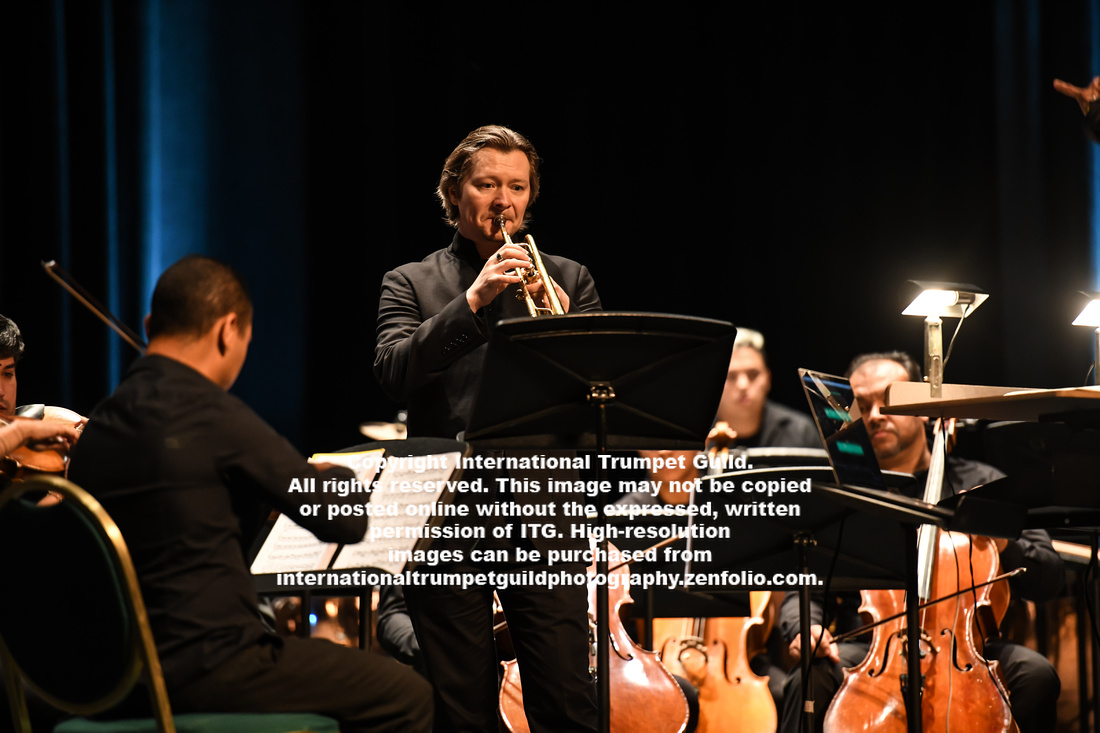 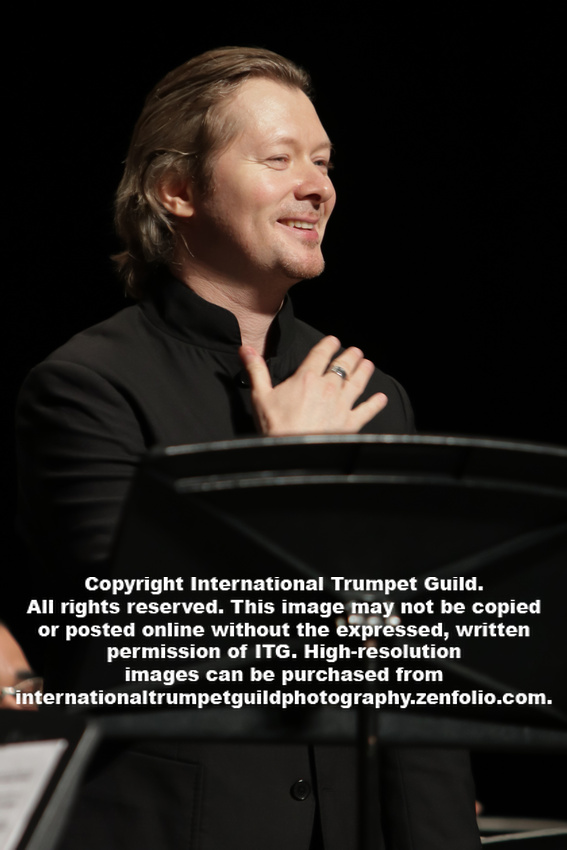 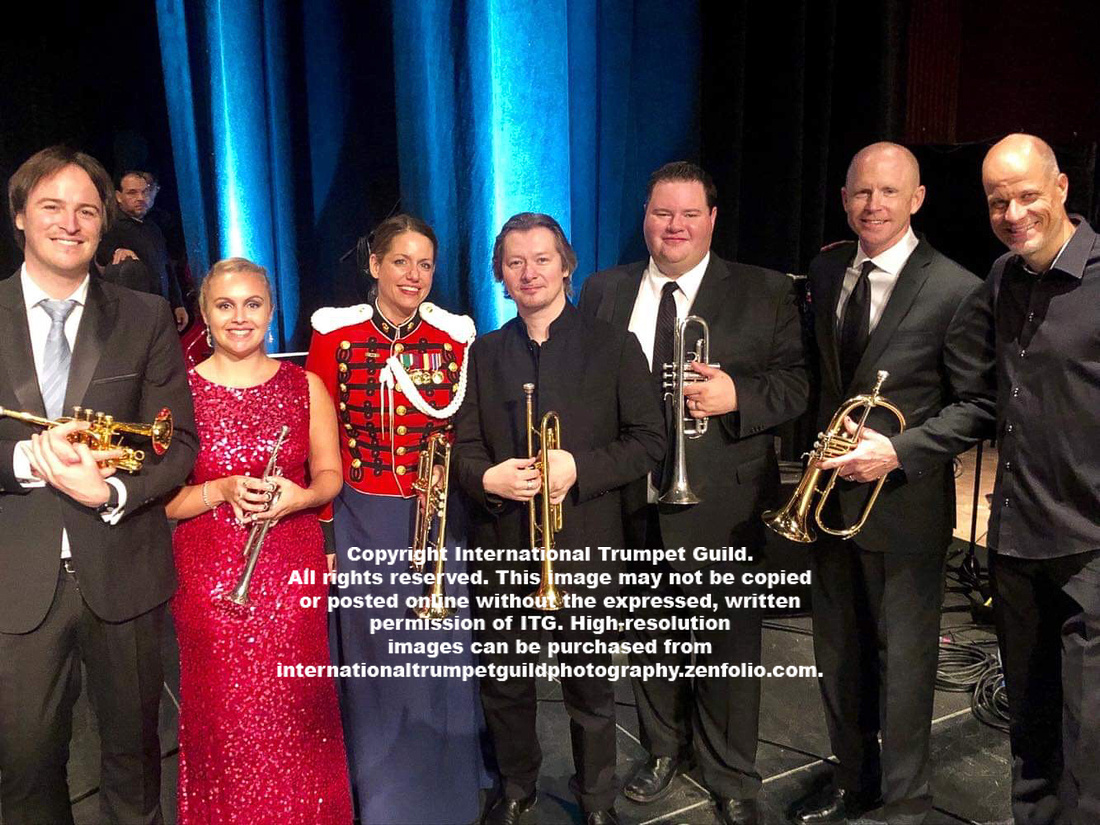 Check out the ITG YouTube Channel for videos from the concert!


Carl Fischer and T.Ë.T.I.: Tribute to Evolutionary Trumpet Icons
Carl Fischer presented an innovative and cleverly constructed concert, accompanied by a six-piece ensemble that included guitar, bass, drum set, and percussion, along with trumpeter Stephen Wright and the incredible tenor saxophonist Michael McArthur. Titled “Tribute to Evolutionary Trumpet Icons” (T.Ë.T.I.), the concert featured trumpet players who revolutionized music and trumpet playing, including Louis Armstrong, Dizzy Gillespie, Miles Davis, and Maynard Ferguson. Fischer interspersed videos of interviews of Dizzy, Miles, and Maynard while bringing his own unique spin to works made famous by each artist, including What a Wonderful World (Armstrong), A Night in Tunisia and Salt Peanuts (Gillespie), Someday My Prince Will Come and All Blues (Davis), and Chameleon and Birdland (Ferguson). Fischer, dazzling on the trumpet, also played valved trombone, soprano sax, and tenor sax.The evening was a concert and a course in jazz history rolled together, making for a thoroughly enjoyable performance. (KE) 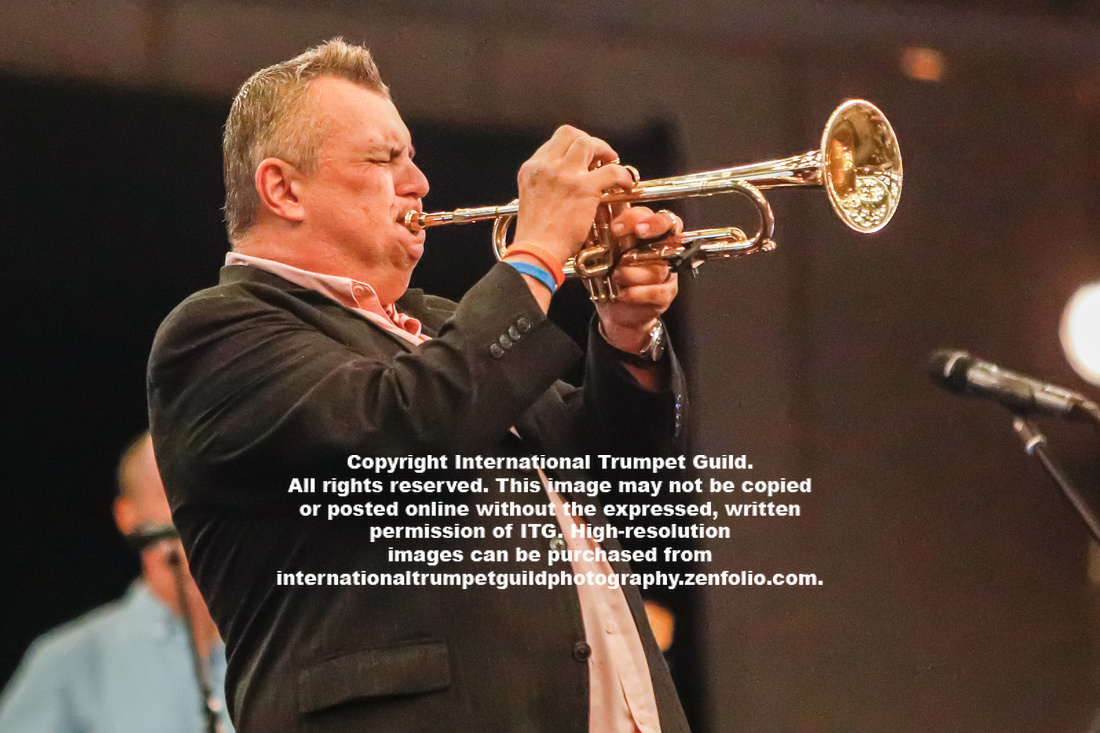