The non-professional/comeback players make up an important subset of the International Trumpet Guild. I believe that they may look forward to our annual conferences more than any other group within the Guild. For years I hesitated to call them amateurs--especially since many of them perform more frequently than I do--until I was reminded that the word “amateur” comes from “amare,” which means “to love.” These folks LOVE the trumpet!  And they love to spend time together, whether as a trumpet ensemble or at a reception at the Q Bar. Dan Hallock, chair of the  Non-Pro/Comeback Players Committee, spoke enthusiastically at the reception about events yet to be held during this week’s conference and about events already planned for the 2019 conference in Miami, Florida. ITG President Cathy Leach thanked the group for their continuing involvement in ITG. (KE)

The concert began with the San Antonio Brass Band performing Paul Lovatt-Cooper’s Enter the Galaxies. The SABB, led by John Carroll, gave its inaugural performance on March 26, 2017, and a little more than a year later took first place in the Section 1 category of the 2018 NABBA Championship. The opening work and Philip Sparke’s The Year of the Dragon, performed later in the concert, left no doubt as to why. The band had a very impressive blend and balance.

The first of five “guests” to perform with the SABB was Wiff Rudd, trumpet professor at Baylor University. He performed Papa Joe Concerto by Scott McAllister, professor of composition at Baylor. Anyone familiar with Rudd’s Collaborative Practice Concepts book would recognize snippets from warm-up and practice exercises contained therein, now transformed into melodic motives for the three-movement work. 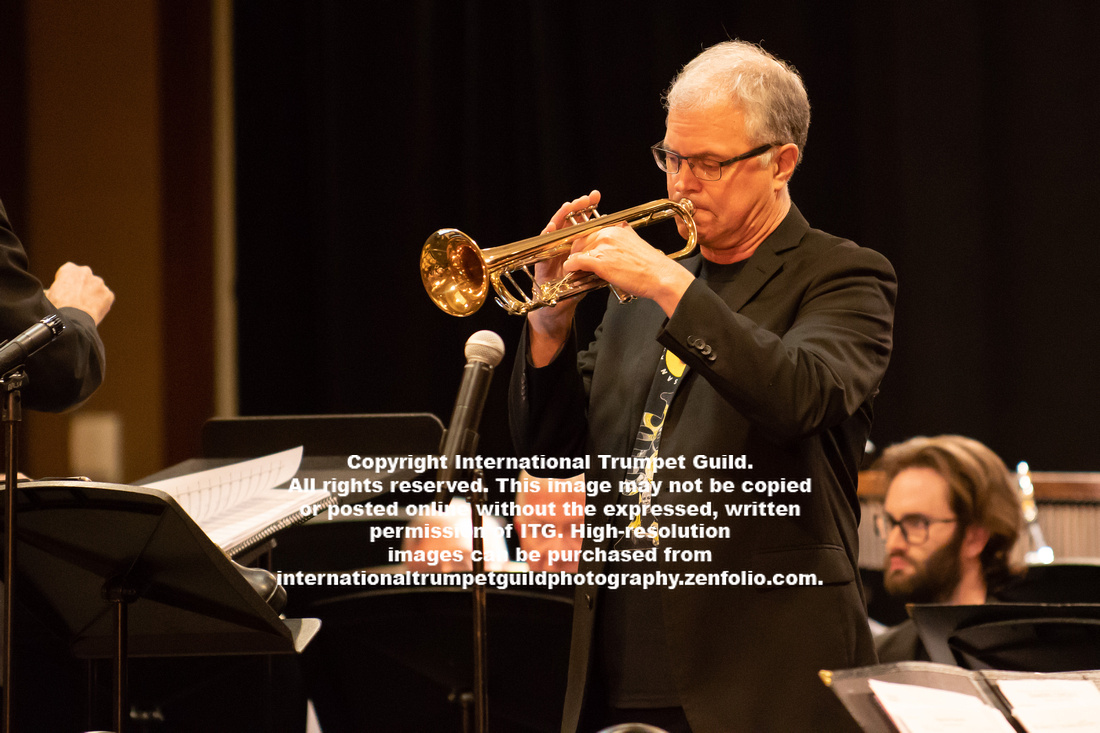 The two pieces performed by Bryan Appleby-Wineberg, professor of trumpet at Rowan University, showcased the most notable characteristics of the cornet. The joyful, florid passages of Peter Graham’s Glorious Ventures, followed by the beautiful tone and lyrical capabilities featured in Ivor Bosanko’s arrangement of Joy Webb’s Share My Yoke, provided ample opportunity for Appleby-Wineberg to demonstrate his remarkable prowess in this medium. Rex Richardson never fails to dazzle his audiences, playing works that few would attempt. His performance of Allen Vizzutti’s Three World Winds proved the perfect vehicle for his considerable talents. Richardson is a member of Rhythm and Brass and the Brass Band of Battle Creek and has become a solo trumpet artist renowned for both his jazz and classical playing. 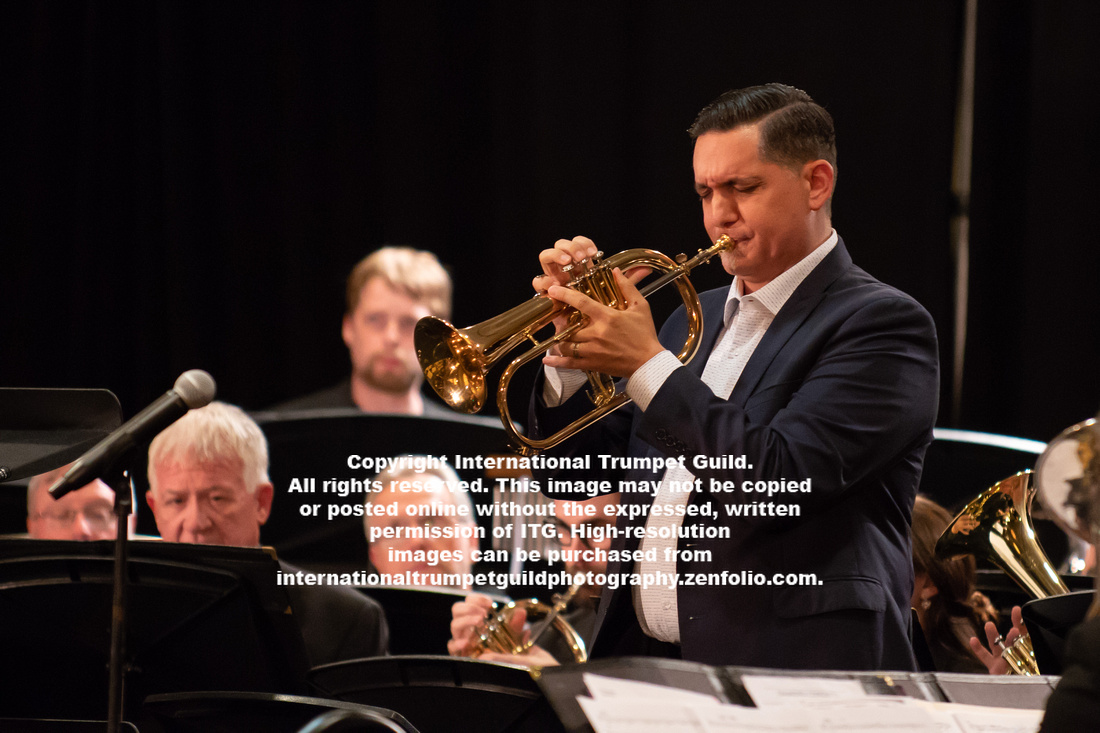 Up to this point in the program, the master of ceremonies read extensive bios to introduce each of the soloists. For the next soloist, however, he merely said, “Ladies and gentlemen, Phil Smith.” For members of ITG, Smith is someone who needs no introduction. The two works he performed were Robert Farnon’s Scherzando (arranged by Mark Freeh), followed by the now-famous arrangement by Joseph Turrin of George Gershwin’s Someone To Watch Over Me (brass band adaptation by Jeff Christmas). As the last note of the Gershwin faded, murmurs of appreciation could be heard from many of those present, followed by applause filled with the respect felt for this legendary performer. 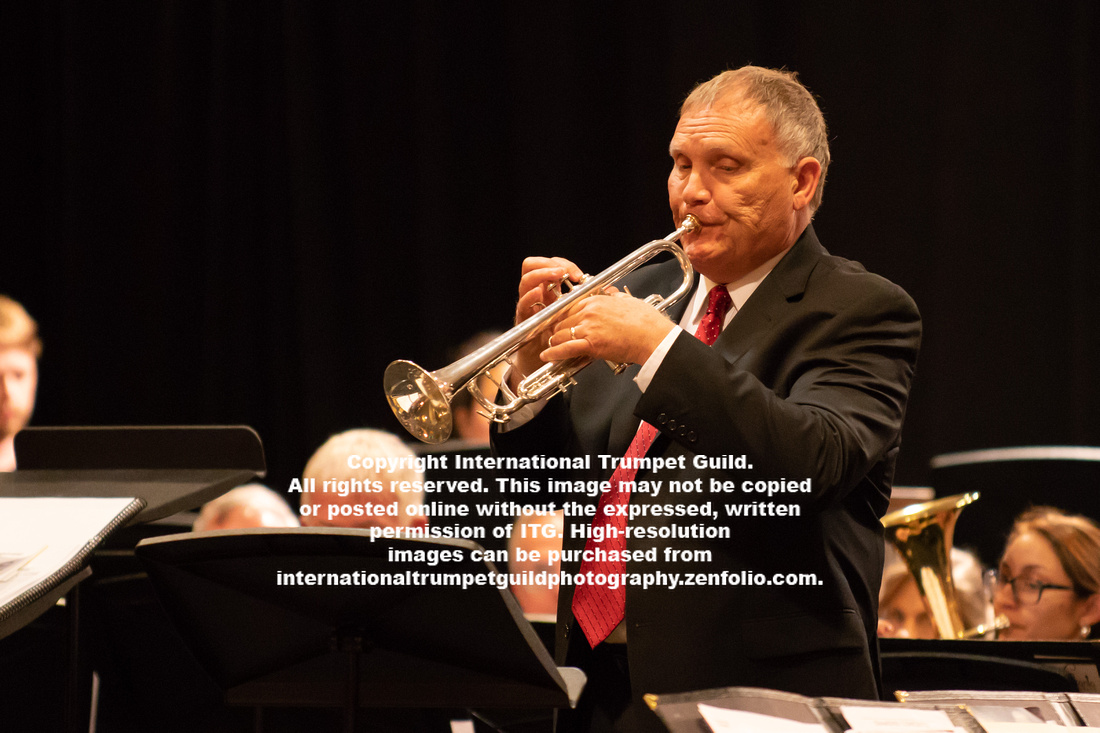 The highlight of the evening was the performance by the British Tom Hutchinson, principal cornetist with the Cory Band. He performed three works. From the first notes of Edward Sutton’s The Paragon, Hutchinson demonstrated his incredible sound and great facility, making this piece look and sound easy. The audience savored his rendition of Leonard Ballantine’s Don’t Doubt Him Now (arranged by Craig Woodland) by waiting several seconds after the final note before erupting into thunderous applause. Hutchinson ended his portion of the concert with the lively James Benedict/Harry James version of Carnival of Venice, arranged for brass band by Mark Freeh. 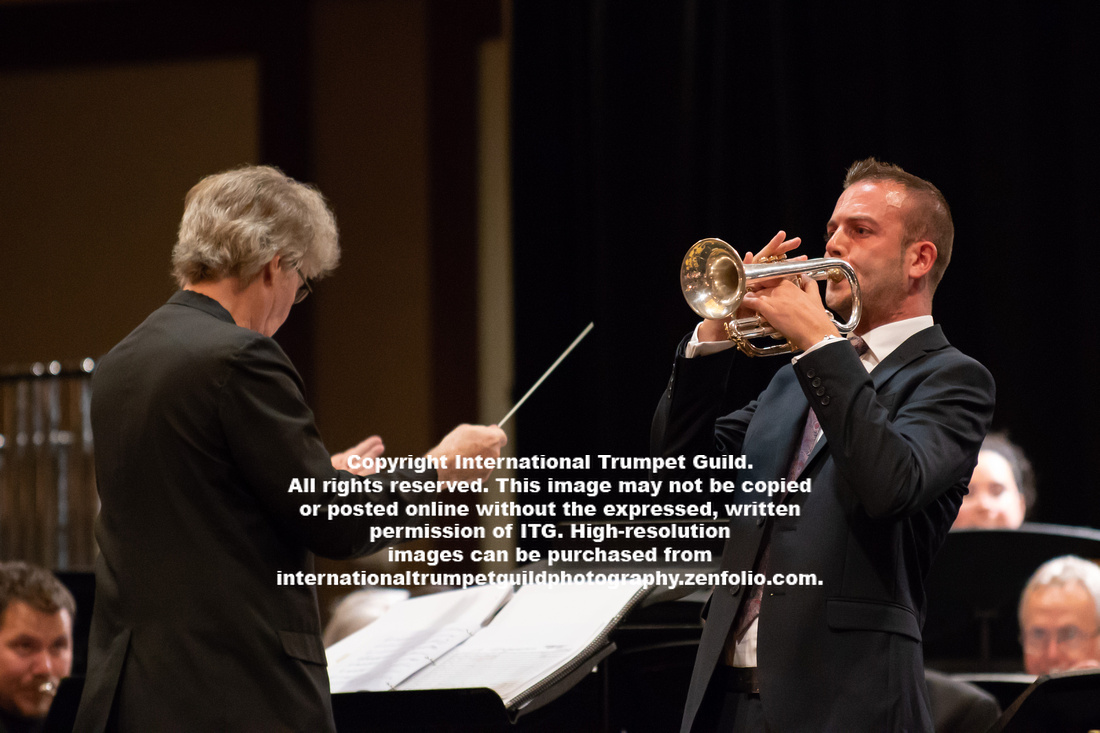 The final work brought all of the evening’s soloists back to the stage to perform the Rafael Méndez arrangement of Las Chiapanecas. As is often the case with these types of performances, the concert was a bit long at 2-½ hours, but I can’t think of a single piece that should have been sacrificed. (KE) 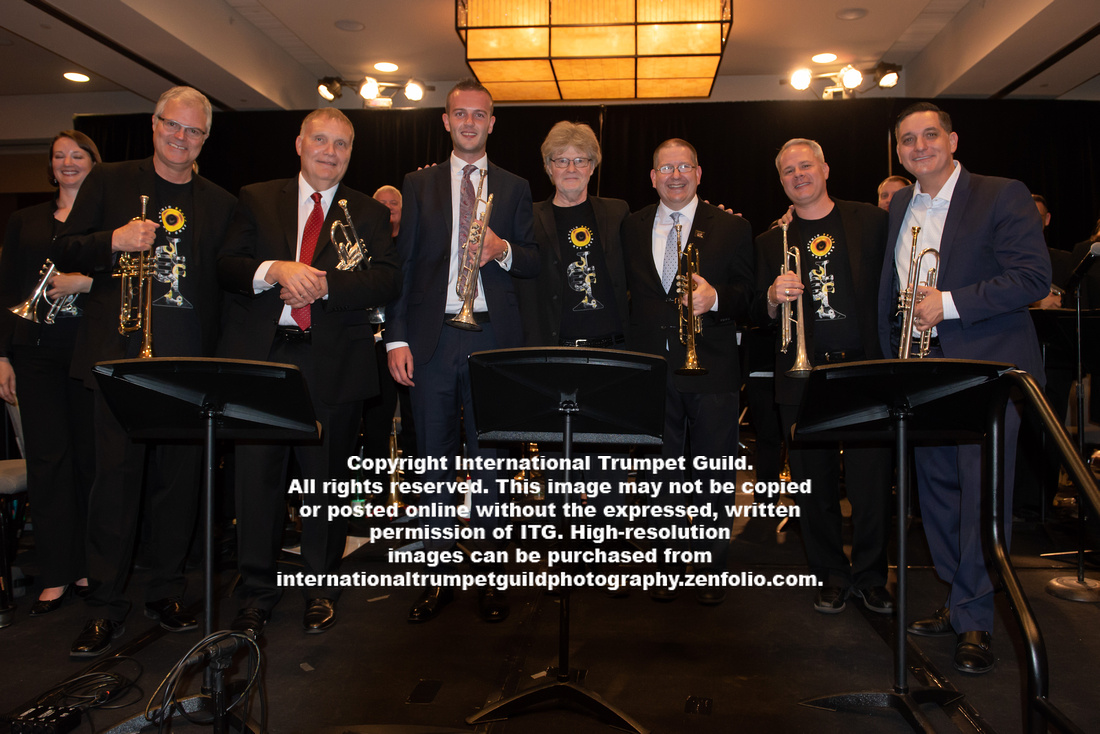 INSIDE OUT Duo: Markus Stockhausen and Florian Weber--Concert

The duo offered seven unique selections, each one a tone-poem of textures, rhythmic variety, and extended, brilliant free improvisation. Having performed together for a decade, these musicians were hand--in-glove throughout the entire stunning performance. The first piece, Zephir, set the tone for the evening. Using his lush flugelhorn, Stockhausen, who composed most of the evening’s selections and is more a minimalist, played lush long tones juxtaposed with rapid runs into the upper register, all while Weber accompanied with lush block chords and punctuated fills. Stockhausen’s command of the flugelhorn and trumpet was obvious through Weber’s gorgeous The Wise Magician, the joyous uptempo Liberation, and the hymn-like Our Father. Not in Vain, another of the textured poetic character, showed the artist’s Harmon-muted trumpet interplaying with Weber’s entrances and his own extended tacets. They concluded the performance with Jahoo, a faster effort which added piccolo trumpet. Their encore was Always Hope, a beautiful balladic piece which once again offered lushness, intensity, and innovative playing by the duo. (NM) 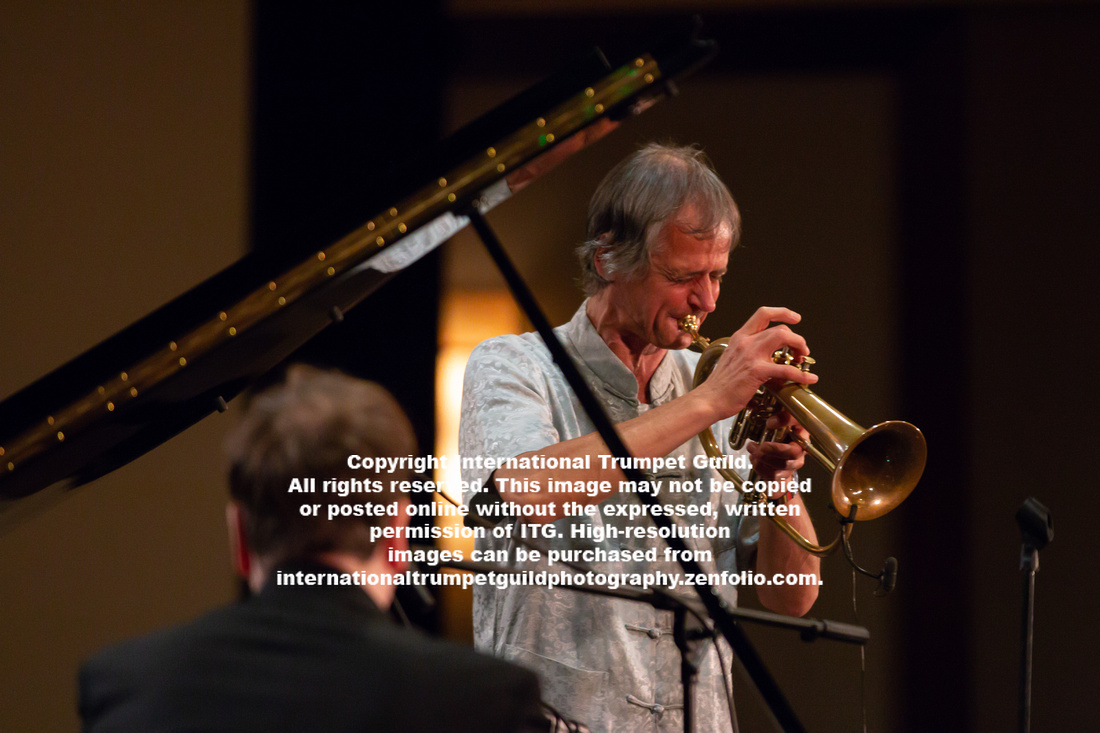