Dr. Aaron Witek’s cross-training approach is to work on several fundamentals at one time to get the most out of his warm-up session. The session began with several breathing exercises and some leadpipe buzzing. The goal is that the player makes sure that the air leads the way with everything played on the trumpet. A handout was provided with several exercises that Witek developed that incorporate these cross-training fundamentals. For example, the first study combines tone and articulation, and the second combines tone, fingers, and flexibility. Many of the exercises use lip bends to help develop correct air speed when playing. Witek took participants through all ten exercises of his warmup, always providing excellent pedagogical information about the goal of each exercise. (JBu)

Dr. Kyle Millsap opened the session by explaining why we warm up. He stated that it is a way for trumpet players to do a “system check” and normalize the day-to-day factors that can affect one’s playing. He emphasized the importance of developing an efficient warm-up routine that does not take too long or wear out the chops; Millsap’s warmup can be done in about fifteen minutes. One crucial part of his routine is establishing a relaxed breath that has constant motion through the inhalation and into the exhalation. Millsap demonstrated several simple breathing exercises that he enjoys doing along with his favorite pop songs on his stereo, rather than a metronome click. Millsap encouraged utilizing the Tonal Energy app, which provides a variety of drone sounds to develop pitch and tone centering. (EM)

Despite the early hour, the ITG General Membership Meeting was nearly “standing room only.” The meeting began with comments regarding the conference by Conference Director Jean-Christophe Dobrzelewski, followed by comments and critiques of the 2018 conference by the members in attendance. This was followed by ITG Secretary Kevin Eisensmith reading an abridged version of the minutes from the Board of Directors meeting earlier in the week. Eisensmith’s notes outlined the direction the Board intends to take in the coming year and were transparent and informative. Next, ITG Treasurer Dixie Burress gave her report on the state of the organization’s finances, and Publications Editor Peter Wood reported on the state of the ITG Journal. The morning concluded with a vigorous discussion period. The board was very open to the many thoughtful questions and comments offered by the membership. ITG President Cathy Leach and the Board of Directors made themselves available for discussion throughout and after the productive meeting. (BH)

Barry Bauguess: Dance, Rhetoric, and Text in the Art of the Baroque Trumpet

Baroque trumpeter Barry Bauguess and his wife, Paige Whitley-Bauguess, a noted expert in Baroque dance, presented a clinic titled “Dance, Rhetoric, and Text in the Art of the Baroque Trumpet.” They were assisted by Baroque trumpeter Melissa Rogers and accompanied by Rebecca Wilt on a Roland C-30 digital harpsichord. Bauguess and Rogers opened the session by performing Fantini’s Riposta detta del Savati on four-hole vented Baroque trumpets. Bauguess then introduced the concepts of historic pitch standards, temperaments (sixth comma meantone is recommended for Baroque trumpets), tone, articulation, and rhetoric (the art of good communication: logos, ethos, and pathos). Paige Whitley-Bauguess demonstrated such Baroque dances as the bourée, minuet, and gavotte and explained how choreography was notated and combined with musical patterns (see http://www.baroquedance.com for more information). Putting it all together, she danced to selections by Jeremiah Clarke, Heinrich Schmelzer, and Bach—all performed by Barry Bauguess, Rogers, and Wilt to demonstrate with grace and artistry the concepts discussed. (EK) 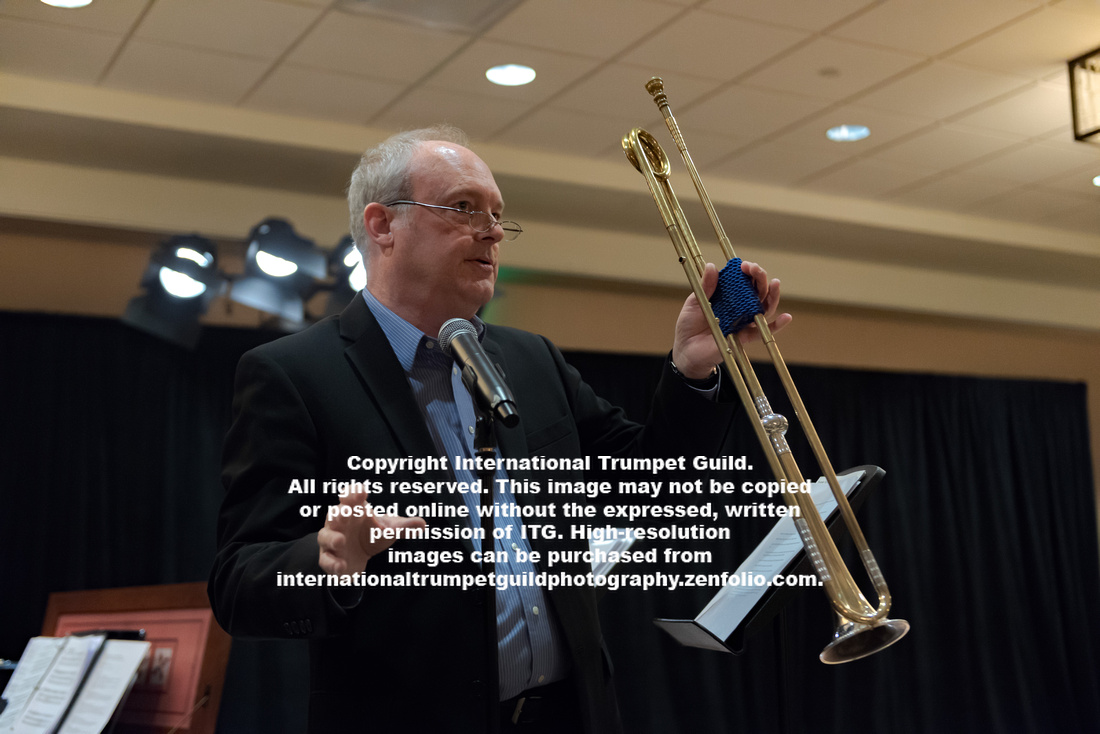 Joe Burgstaller’s morning recital was a transcendent display of connection, musicianship, and virtuosity. The repertoire repeatedly combined diverse styles in mini-sets including such composers as JS Bach, George Gershwin, Chick Corea, and Billy Joel. Burgstaller’s addition of a soulful extended improvisatory section between verses of De Falla’s Nana was stunning. Guests included Ryan Anthony, David Hickman, members of the Dallas Brass, and percussionist Michael Mixtacki. The final piece was an engaging world premiere of an ITG commission, Trumpet Voyage for trumpet (C and flugel), percussion, and piano by Subramaniam. An extended ovation led to a brilliant encore. Before the second set, Burgstaller discussed the question “What is our place in this world?” and explained that, for him, it is not to impress but, rather, to share and make the world more beautiful. This performance was a huge success in meeting those goals. (AK) 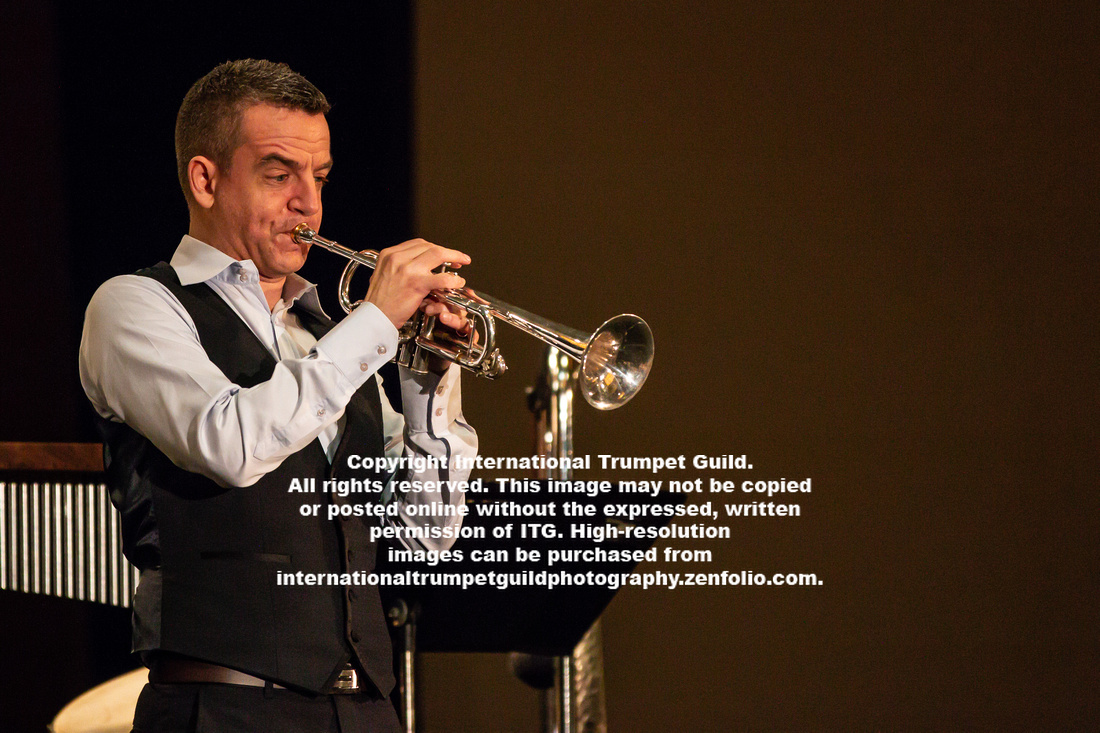 A large audience warmly received the local San Antonio Symphony trumpet section for their presentation in which each member gave an individual talk and took questions. The session began with the newest member, Daniel (Danny) Taubenheim, associate principal. Taubenheim won this position in 2016 after studies at Juilliard and Rice. He offered a variety of tips about preparing for auditions, including performance anxiety and how to succeed once you win a job. Lauren Eberhart has played with the San Antonio Symphony for 22 years. She discussed the role of the second trumpet player and gave more tips on taking auditions. John Carroll, long-time principal trumpet, concluded the session by offering advice about dealing with performance anxiety and giving some intriguing pedagogical suggestions. He focused on tone production and the use of air and then covered tips for technical development and the significance of even small amounts of improvement. (AK) 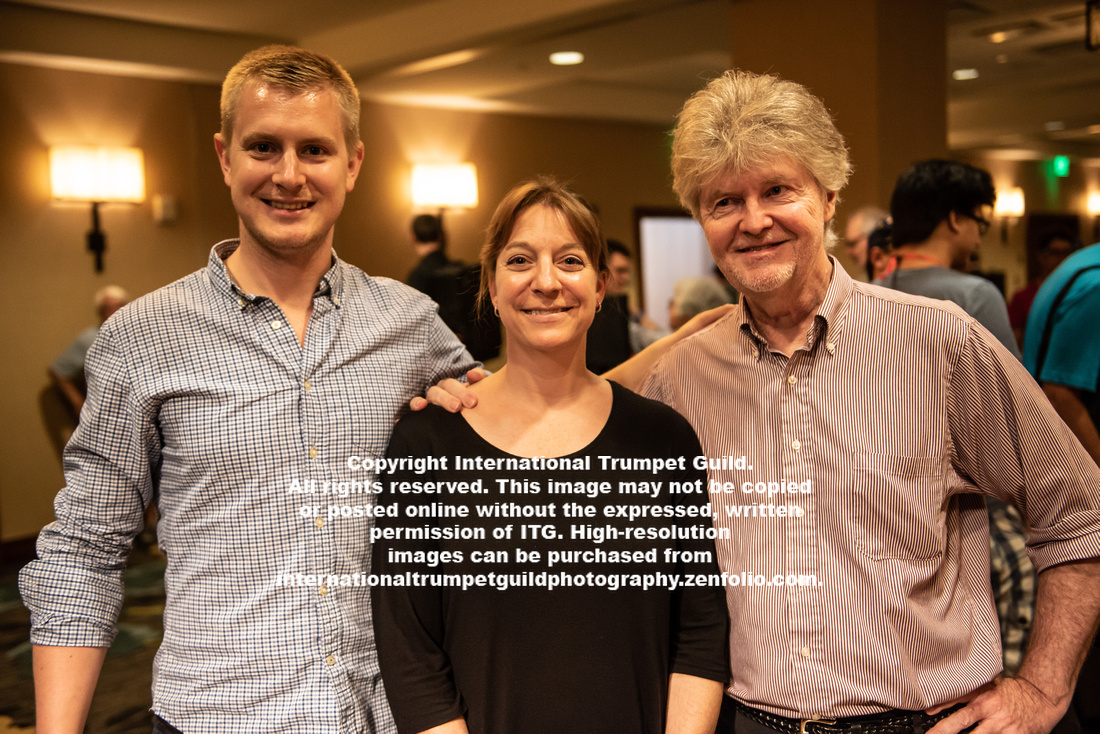 Celebrating ten years as a professional trumpet ensemble, Tromba Mundi opened their program with William Stowman’s Fanfare Tromba Mundi. Written specifically for this ITG performance, the ensemble continued with Joyous Noise, by Erik Morales. Continuing with another Stowman original, The Non-Articulation Agreement showcased the wonderful lead playing of Scott Belck. Slowing things down a bit, the group continued with Aranjuez, Mon Amour, highlighting the beautiful flugelhorn playing of J.C. Dobrzelewski. Joey Tartell’s arrangement of Good Bait showed his command of the entire range of B-flat and bass trumpet and gave him and Belck opportunities to improvise. Bryan Appleby-Wineberg’s gorgeous cornet playing was featured on Stowman’s arrangement of A Fond Kiss. The concert was full of great music and laughter and concluded with Appleby-Wineberg’s explosive arrangement of the theme from Green Hornet. (WK) 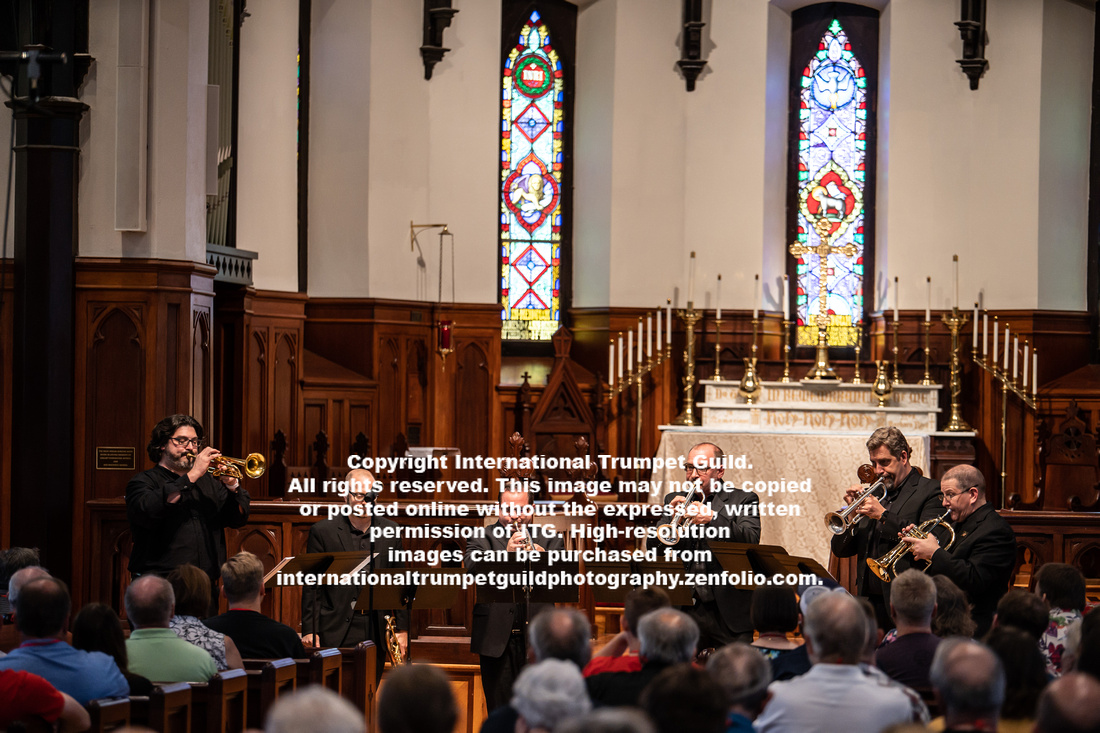 Alongside the Conference Jazz Trio (Andrew Bergmann, Brandon Guerra, and Aaron Prado),Tony Glausi, the winner of the 2017 Carmine Caruso International Jazz Solo Competition, gave an excellent jazz recital that showed why he is considered one of the great young talents in the jazz community. A highlight was the standard On Green Dolphin Street that showed the same breathtaking creativity and effortless fluidity on the flugelhorn that Glausi had already displayed on the trumpet. I Can’t Seem to Get Enough of You, one of Glausi’s original works, had such a classic sound and beauty that it evoked thoughts of the Great American Songbook. Glausi performed with a great combination of beautifully flowing, simple phrases and wonderfully complex tonal language, all while exhibiting exceptional control and stunning articulations at softer dynamics. An electrifying upper register combined with a timeless sound to match his technique and energy, Glausi left the audience wanting more. (AJ) 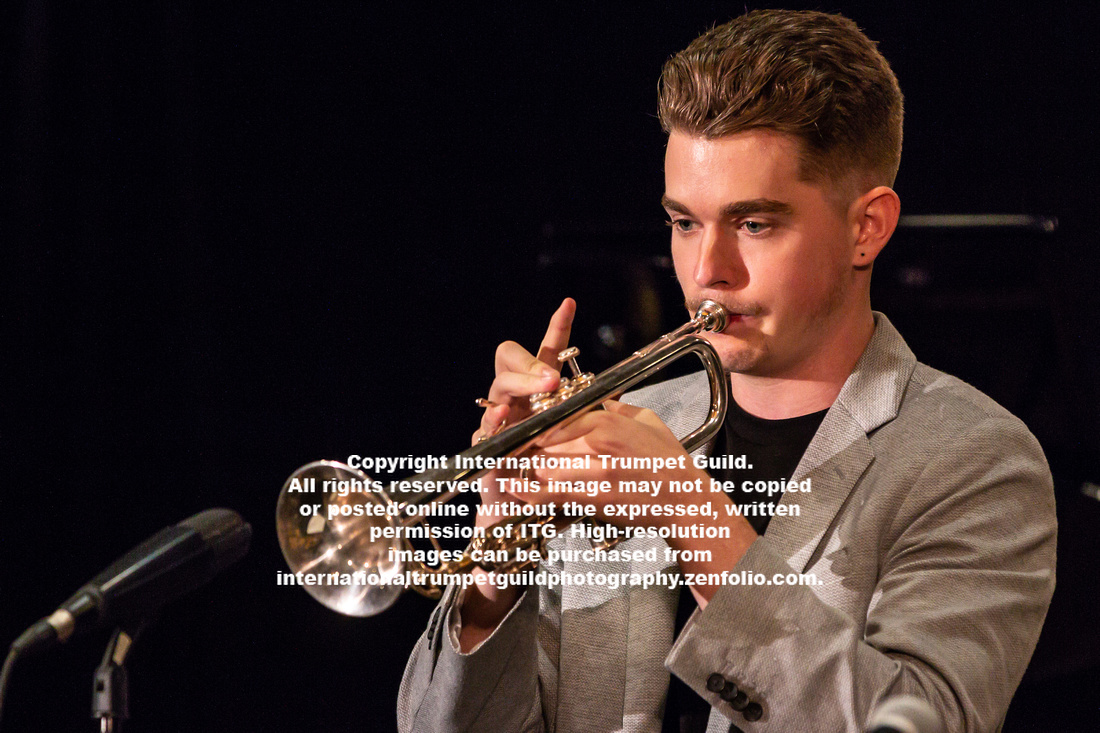 Traditional jazz took the spotlight during Jon-Erik Kellso’s afternoon jazz concert featuring the music made famous by Louis Armstrong, Bix Biederbecke, and Roy Eldridge, among others. Kellso performed most of the concert on a Puje trumpet, a cornet/trumpet hybrid that allowed him seamlessly to shift style and sound from the early-jazz cornet sounds of the 1910s and 1920s to the jazz trumpet sound of the 1930s and 1940s. The program took a quasi-chronological approach through traditional jazz, and Kellso weaved in plenty of historical commentary to shed light on this excellent historical jazz repertoire. He started with a trio of Louis Armstrong tunes: Cornet Chop Suey, Black and Blue, and Mahogany Hall Stomp. After a Bix Biederbecke ballad, Kellso performed a trio of Duke Ellington tunes written for famous trumpet soloists of the Ellington band—Bubber Miley and Cootie Williams. The program ended with a pair of Roy Eldridge tunes: After You’ve Gone and Rockin’ Chair, before closing with one last Louis Armstrong tune, You’re Driving Me Crazy, a precursor to the famous Basie standard Moten Swing. Jon-Erik Kellso’s sound and style was impeccable, and listeners were transported back in time to an earlier era of jazz in which trumpet technique featured fast vibrato, growls, scoops, and half-valve glisses. His pixie mute-plunger mute work was of the highest quality, and it was almost as if Cootie Williams himself were on stage. (SH) 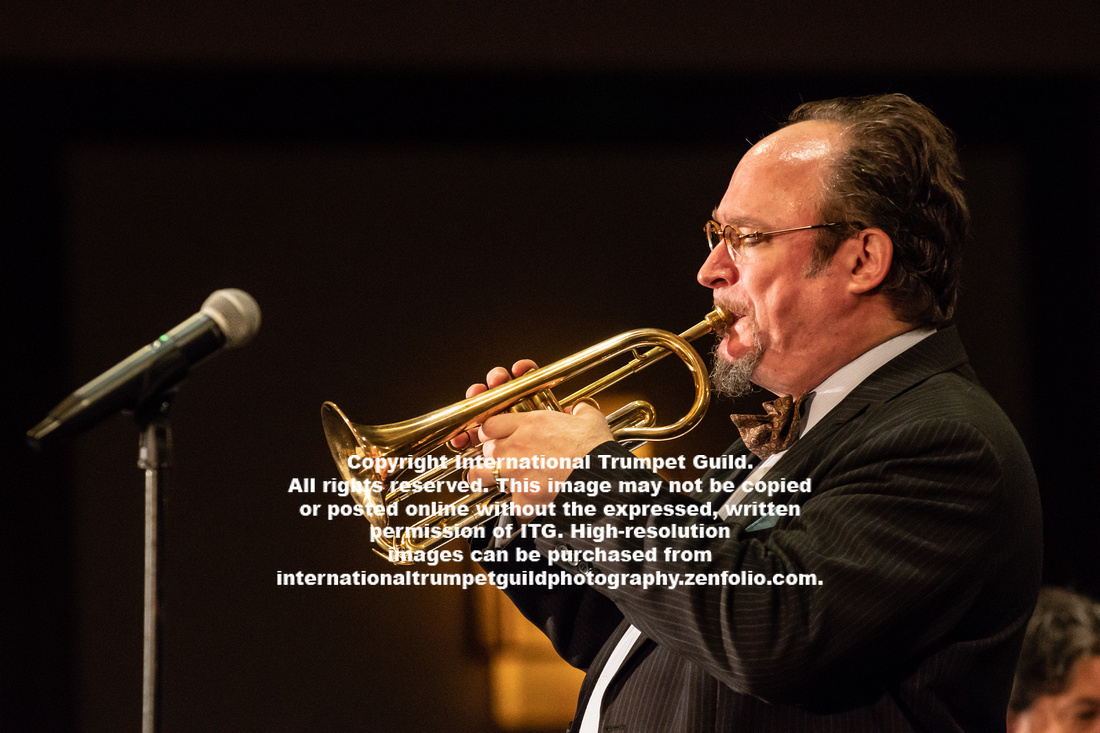 Opening with Malcom Arnold’s Fantasy for Solo Trumpet, Peter Bond’s exciting performance immediately demonstrated his flexibility and control of the instrument. He provided a brief discussion explaining the concept of the recital and the title “Bell Canto” [sic]. While none of the works were written for voice, Bond uses singing to prepare musically for all passages. He performed his own transcription of J.S. Bach’s entire Suite No. 3 for Solo Cello in the challenging key of concert E major on B-flat trumpet and explored the entire range of the instrument. The boisterous applause demonstrated the audience’s appreciation for the herculean effort required. Miriam Hickman joined Bond in a fine performance of Gabriel Fauré’s Sicilienne. The final selection of the concert was Arban’s Fantasie Brilliante appropriately performed on cornet with a dark and velvety sound. Even the various introduction sections included significant changes in tempo and style. This work was a fitting conclusion to a highly entertaining recital. (LE) 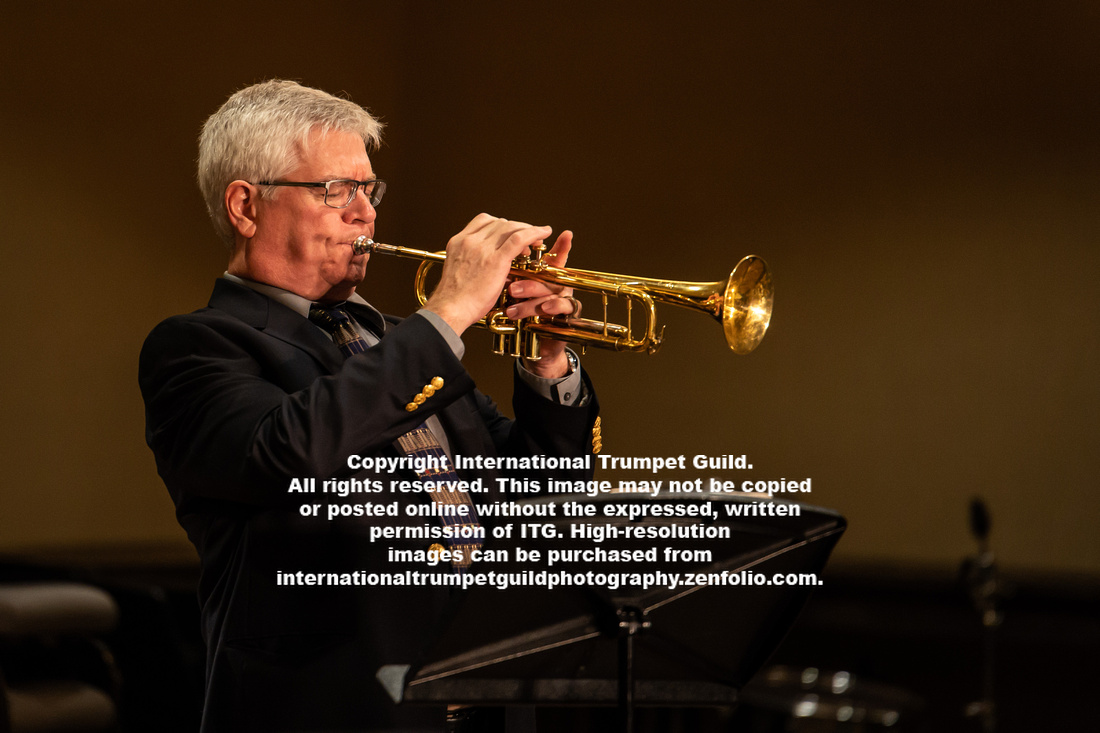 Merrie Klazek’s session, subtitled “Tips and Tools for Trumpet Players of All Levels and Musical Styles to Feel Confident and In Control on Stage and in Rehearsal,” provided a very informative approach to dealing with the many pressures of live performance. Klazek’s session highlighted the knowledge gained from her personal experiences, teachers, and mentors, which are used to identify and navigate the various issues that often accompany stage fright. She addressed a number of techniques that performers can use to examine their playing so that when they are placed into high-stress situations they can be as successful as possible. Professor Klazek also provided the audience with a brief handout that highlighted her key points and provided several guiding quotations from her mentors. (JPS) 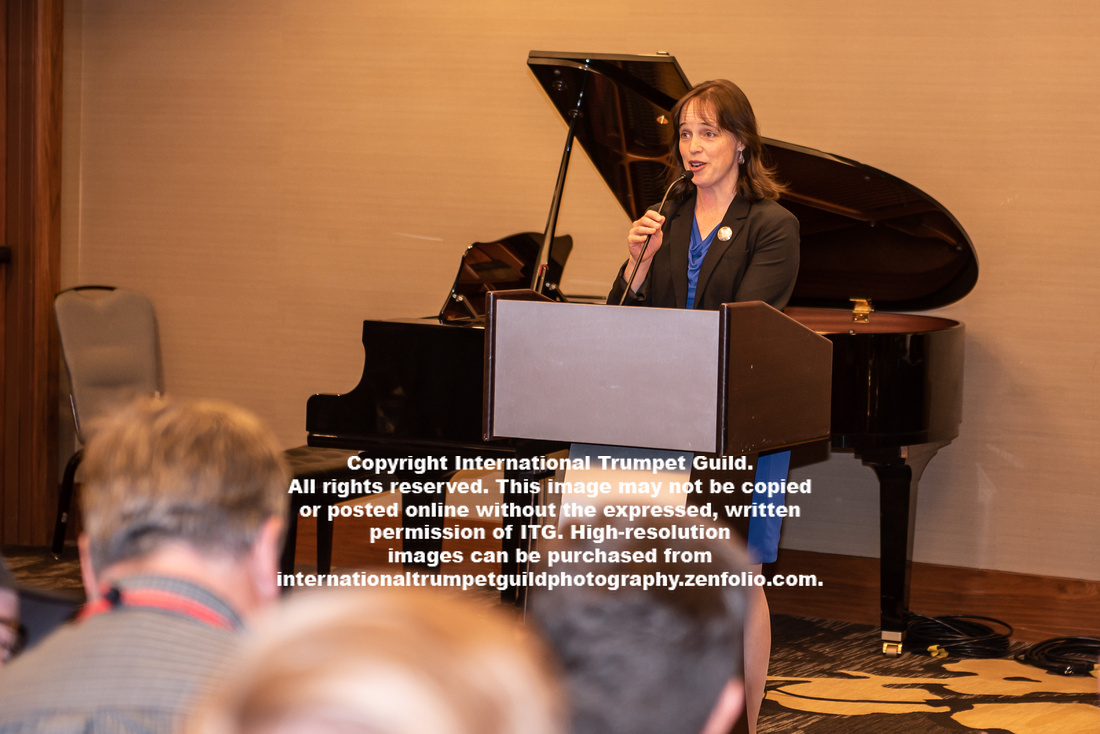 Mike Vax Presentation—Successful Lead and Section Playing: Plus Some of the Basics

Mike Vax spoke to a crowded room in the Rio Grande Ballroom about lead playing, section playing, and the basics of jazz trumpet pedagogy. He touched on many pedagogical topics throughout the session and interweaved many stories of his time as lead trumpet in the Stan Kenton band. The first topic he discussed was the “percentage formula” for trumpet playing, which he breaks down as 90% air, 9% brain, and 1% chops. He spent a lot of time talking about the 9% brain, recommending several books to read about positive thinking and mindfulness in performance: Science of Breath, Psycho-Cybernetics and The Inner Game of Music. In discussing the role of the lead player in a jazz band, he emphasized the point that “The lead trumpet player should be the least creative person in the band.”  In other words, the lead player should play it the same every night, because the rest of the band is counting on him or her to be consistent in leading the band. The next big topic that Vax covered was how to improve the upper register, and he specifically mentioned lip flexibilities like those on page 44 (#22) in the Arban book and those in the Charles Colin book. He stressed that building better endurance sets the foundation for improving the upper register and that increasing range is something that happens slowly over many months and years. He finished the clinic session with a discussion of how to approach learning improvisation. His recommendation was to spend time listening and learning tunes by memory. Then, approach soloing based on the melody and start soloing by ear. Music theory should come later. Vax included several handouts that discussed these topics in greater detail. (SH) 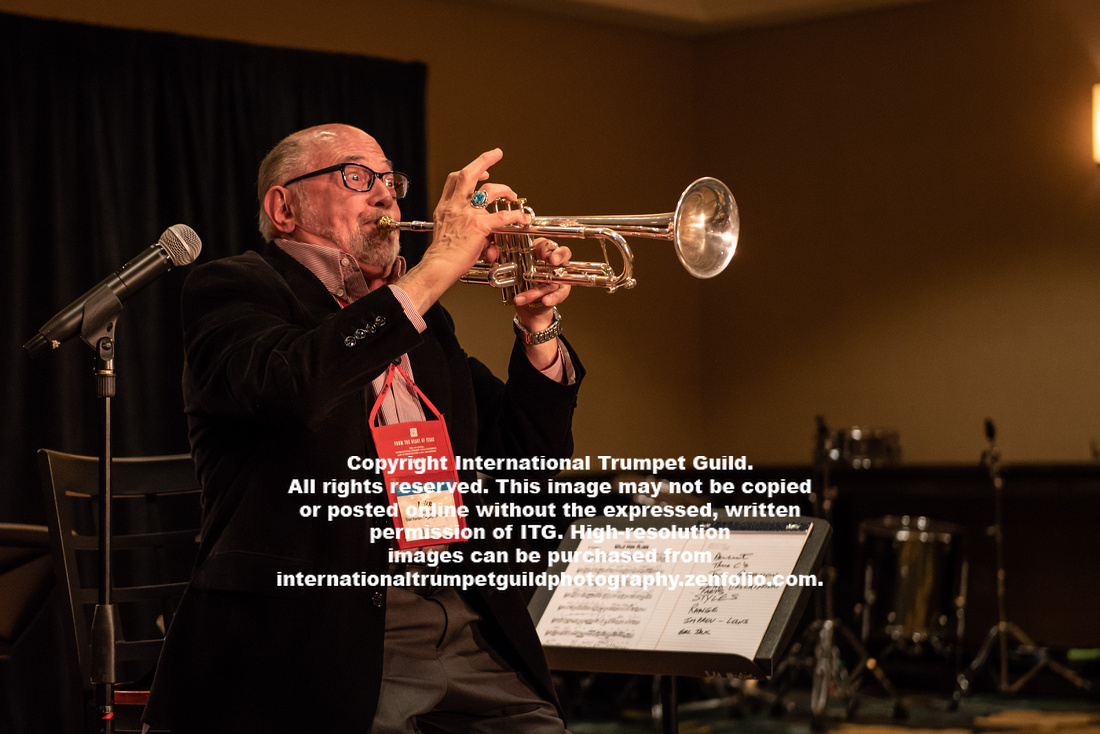